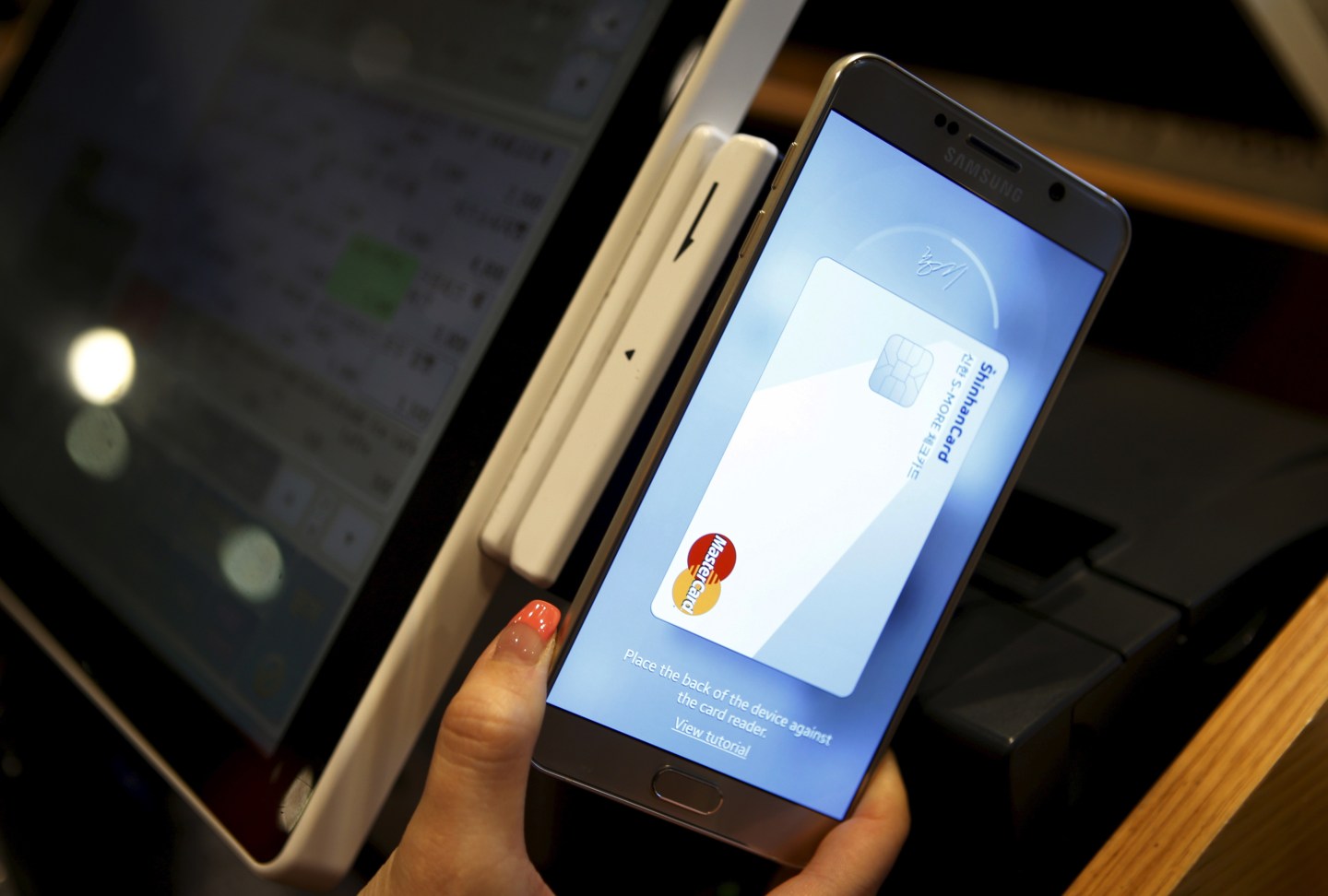 Watch out, everyone: The world’s largest technology companies are waging a war over your mobile wallet.

Samsung recently announced the U.S. launch of its mobile-payment service called Samsung Pay. The service allows users to make payments from their Samsung handsets at supported credit card machines. Samsung noted that its technology supports more credit card machines than Apple Pay (AAPL) and Google’s (GOOGL) Android Pay. The claim was the first salvo in what is expected to be a long battle not only with competitors, but also traditional payment methods.

Mobile wallets have grown in popularity thanks to Apple Pay, which launched in 2014 The market was further boosted this year by the launch of Android Pay. Some of the world’s largest retailers, including Target (TGT) and Walmart (WMT), have formed the Merchant Customer Exchange (MCX) consortium to build their own mobile wallet, called CurrentC, which is slated to launch next year.

Mobile wallet technology uses near-field communication chips in smartphones to let users make payments remotely. Mobile wallets store user credit cards and once a user makes a purchase, a unique identifier code is sent from the smartphone to the receiver. The payment is made and the credit card number is never shared with the merchant.

Trillions of dollars are spent each year in commerce. By offering mobile wallets, companies—like Samsung, Apple, and others—can get a small slice of each transaction made through their services. If mobile wallets take off the revenue opportunities are massive.

“The physical wallet will at some point be replaced by something in the digital world,” Penny Gillespie, research director at Gartner told Fortune. “At the moment, however, digital payments on mobile are being used in small scale in many places, ranging from emerging countries with cash-only infrastructure to well-banked markets with and without credit.”

The mobile wallet market is still in its fledgling stages, Gillespie said, adding that so far, “most consumers appear uninterested in mobile payments and few retailers accept them—relatively speaking.”

Still, big companies are trying to change all that. Apple promotes its service as “an easier way to pay in stores.” Google’s Android Pay promises users the ability to “shop how you want.” Samsung claims to support more locations than its competitors. All the while, PayPal, MCX, and others, are hoping for success.

Success, however, is relative. According to Wester, in-store purchases made through mobile wallets in 2015 is set to reach just $15 billion worldwide. While that number will jump to $57 billion next year, he argues that it’s “still tiny” compared to the broader market. One issue all mobile wallets face, Wester says, is that they don’t necessarily provide much more value over good old-fashioned plastic.

“The big issue for all of the mobile wallets is whether or not they are providing a real benefit to consumers—and that means a benefit beyond what current payment methods provide,” he said. “In-store isn’t a huge hassle for consumers using plastic. The promise of a more secure transaction—and mobile wallets are more secure—is of limited utility to consumers since they have basically zero liability for fraud.”

So, what may ultimately be the secret ingredient that helps mobile wallets become more appealing to consumers? According to Wester, it’s e-commerce. He says that if the “definition of a mobile payment” expands to include digital purchases, the market opportunity for companies is “approaching $1 trillion worldwide next year.” That’s a big jump from the $57 billion they could stand to process in stores during the same period.

Thanks to being bundled with popular smartphones, Apple Pay and Samsung Pay are expected to help grow the number of mobile wallets in use in the coming year. Earlier this month, Juniper Research said that the market will have 200 million mobile wallet users worldwide by the end of next year. That figure is double the number of users at the end of 2014.

All of this ultimately begs an important question: who will ultimately win? While Apple Pay was one of the first companies out of the gate, Google benefits from the sheer size of the Android market. Samsung Pay benefits from widespread support of credit card machines. Meanwhile, CurrentC and PayPal loom, further saturating the market. Add that to the industry’s youth and it may be difficult, if not impossible, to say which company will ultimately reign supreme.

“It does look like those applications pre-loaded on a device like Apple Pay and Android Pay have a leg up on rivals since they already have a prominent placement on phones,” Wester said. “That doesn’t guarantee they will ‘win,’ but it does give them an early advantage. The issue for those providers will be how well consumers accept being basically locked into a particular ecosystem. That provides an opening for providers who promise a solution that is OS-agnostic.”

In other words, it’s anybody’s game.

For more on mobile wallet technology, check out the following Fortune video: