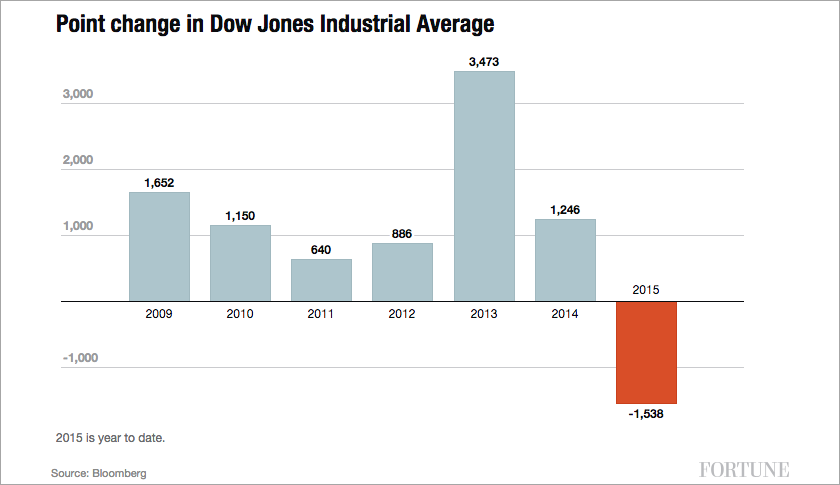 Given that most signs show the economy is improving, and the unemployment rate continues to drop, the market rout has been surprising. And stocks are not just down. They are on track to have their worst year since the financial crisis.

Earlier this week, Goldman Sachs threw in the towel on 2015, cutting its price target for the S&P 500 and saying the market is likely to end the year down 3%. But it doesn’t feel all that bad out there.

So I did some simple math and figured out what it would take for 2015 to avoid being the worst year for the market since the financial crisis. My basic conclusion: Don’t hold your breath. The Dow is currently at 16,284. It would have to get to 18,803 to avoid being the worst year since 2008. That’s 2,519 points, or 15%, higher than where it is now.

A number of factors have combined to make 2015 lousy, with stocks down nearly 9% so far this year. First of all, China. U.S. markets weren’t having a great year. But when stocks started to drop in China, the selloff in the U.S. really began to kick into gear. The concern is that the Chinese economy is worse off than it seems and that could drag down the U.S. economy. More recently, a drop in commodities has provoked fears about weakness in the global economy. On top of that, the Federal Reserve offered a weaker than expected economic prognosis when it decided not to raise interest rates earlier in September.

The stock market is having a lousy year most likely because we have had so many good ones. So far, 2011 was the worst year since the financial crisis, and the Dow was still up 5.5% that year. The other years’ gains were in the double digits. That’s a lot at a time when the economy, while likely not headed for recession, isn’t growing much.

What would it take for the Dow to jump 2,519 points by the end of the year? First of all, corporate profits would likely have to come in much higher than expected. As of now, analysts believe earnings for the average company in the S&P 500 fell 4.5% in the third quarter. For the whole year, earnings are supposed to up slightly. That’s not likely to push stocks higher.

What’s more, a 2,519 point increase in the Dow, if earnings don’t rise, would translate to roughly an average price-to-earnings ratio for U.S. stocks of slightly higher than 17. That’s not an all-time high, or near it, but stocks are only likely to get there if investors are optimistic. And right now on Wall Street, there’s not a lot of happy vibes going around.