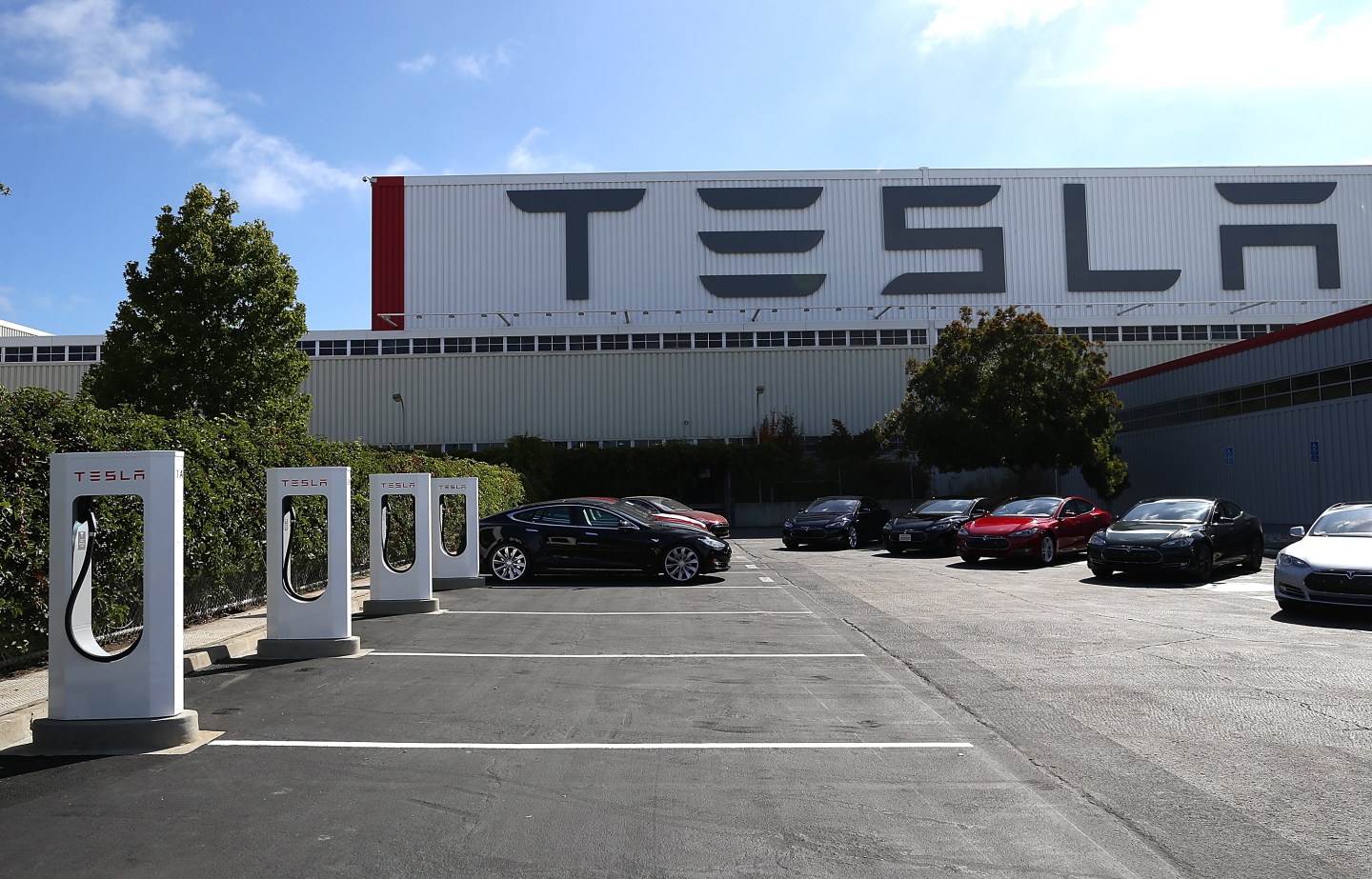 FREMONT, CA - AUGUST 16: A row of new Tesla Superchargers are seen outside of the Tesla Factory on August 16, 2013 in Fremont, California. Tesla Motors opened a new Supercharger station with four stalls for public use at their factory in Fremont, California. The Superchargers allow owners of the Tesla Model S to charge their vehicles in 20 to 30 minutes for free. There are now 18 charging stations in the U.S. with plans to open more in the near future. (Photo by Justin Sullivan/Getty Images)
Photograph by Justin Sullivan — Getty Images

Wall Street stock futures are higher this morning as the markets recover their nerve after a commodities-induced swoon Monday. The dollar is a fraction higher against the euro at $1.1220, while crude oil–one of the many commodities to suffer yesterday–have recovered to just under $45 a barrel.

Today’s must-read story is by Fortune’s Tom Huddleston, Jr. on the five things you need to know about new Daily Show host Trevor Noah, who made his first appearance anchoring the Comedy Central series last night. Read more about the new host here.

Crisis-plagued Volkswagen AG (VLKPY) signaled on Tuesday it would recall up to 11 million vehicles as it tries to address the scandal over its admission that it cheated U.S. diesel emissions tests. Germany’s vehicle watchdog KBA has given it till Oct. 7 to present a ‘comprehensive’ plan for bringing the polluting diesel engines back into line with legal limits.

2. Google shows off its self-driving car.

Reporters descend on Google’s (GOOG) Mountain View, Calif. headquarters today where the company will show off its prototype self-driving vehicle. The event will take place on the roof of the Google X building and will allow reporters to take a test ride, so get ready for lots of first-hand accounts to hit your Twitter feed. Google has been pushing the boundaries with its autonomous cars and is now working to make the cars drive more “humanistically,” as Chris Urmson, who heads Google’s driverless car efforts, puts it.

3. Tesla also has its own debut today.

Tesla (TSLA) will unveil its first-ever electric SUV in full today. The vehicle, known as the Model X, is intended to expand Tesla’s vehicle offerings beyond its signature Model S sedan. The Model X will roll off Tesla’s Fremont factory today and into the hands of customers, some of whom reserved their vehicle as early as 2012. Until now, the public has only gotten brief glimpses of the new model, which will feature distinctive “falcon-wing” back doors that fold up and out.

Warehouse club retailer Costco Wholesale Corp., which became the second-biggest retailer by revenue a month ago, reports its fourth-quarter results today. Costco already reported fiscal year sales of $113.7 billion, which trails only Wal-Mart (WMT) in overall revenue. Same-store sales were also up 7%, excluding the effects of currency moves and gasoline sales. The retailer didn’t provide any guidance on upcoming earnings, which will have many investors’ ears perked.

More updates on the state of the American economy will be released today. First up, single-family home prices for July. The S&P Case Shiller composite index will be released at 9 a.m. ET, showing that home prices likely gained 5.1% year-over-year for the 20 metropolitan areas that the index tracks, according to economist estimates. Then at 10 a.m. ET, the Conference Board will release updated consumer confidence levels for September, which are expected to have slipped to 96.1 from 101.5 last month.