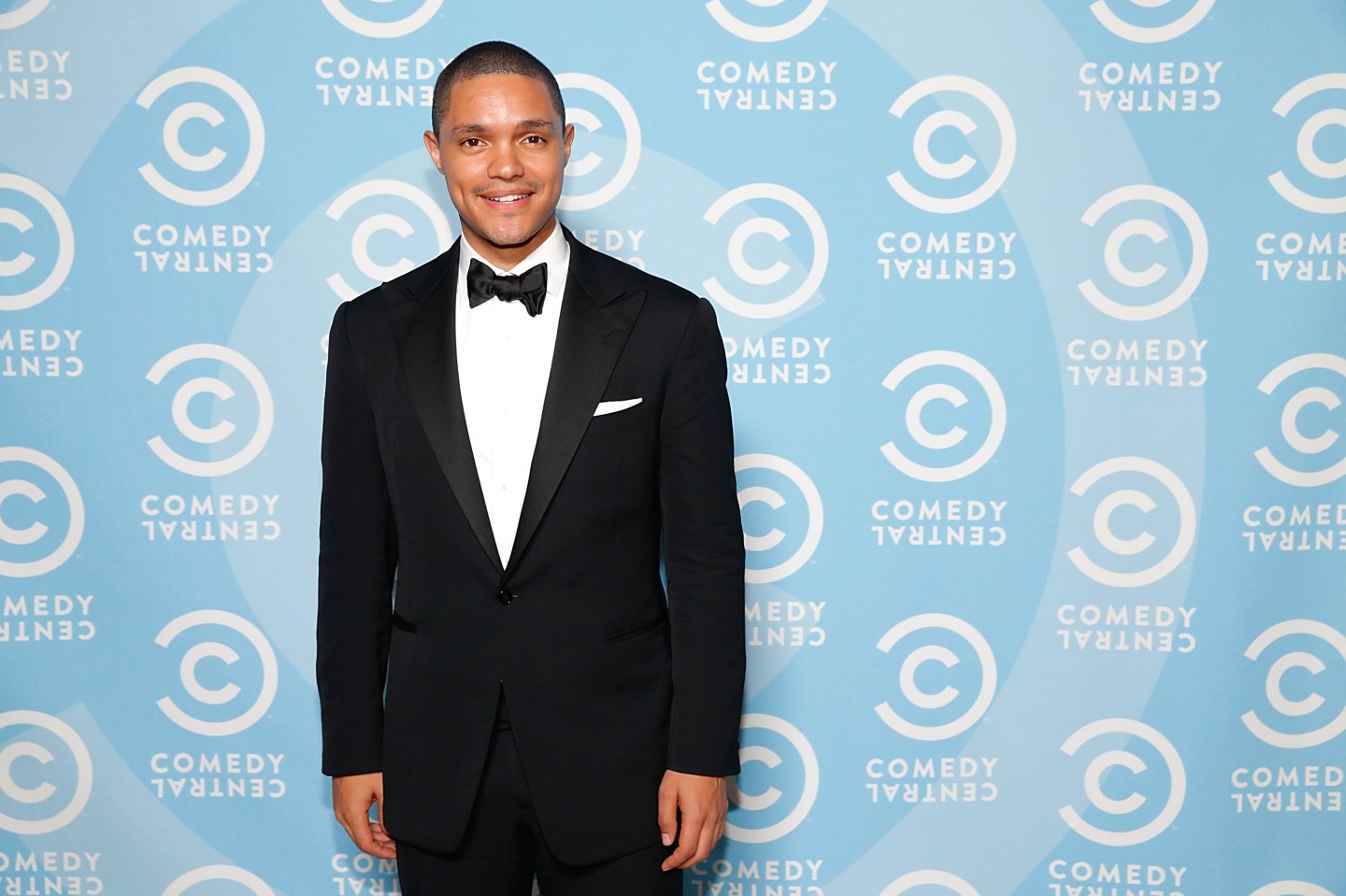 The network, owned by Viacom (VIA), has said goodbye to two comedy superstars in the past year: Noah’s predecessor, Jon Stewart, and Stewart’s protege, Stephen Colbert. That means there’s a lot riding on Stewart’s replacement, the 31-year-old South African Noah.

So, before Noah sits down with his first guest — comedian Kevin Hart — here are five things to know about the young man with a big role to fill in late-night TV. The Daily Show airs at 11 p.m. ET.

It only took a few hours after Noah’s announcement as The Daily Show host for people curious about the young comedian to find a series of offensive tweets he posted several years earlier. The tweets, which were seen as negative towards groups from women to Jews and the obese, caused a firestorm of criticism. Noah quickly apologized, blaming the offensive posts on his youth at the time while also claiming that his comedy and his personal views had evolved over the subsequent years.

However, Noah was criticized again more recently after responding to complaints over an all-male photo shoot of late-night television hosts. Noah suggested that women are already powerful forces in entertainment, despite their lack of representation behind television comedy anchor desks.

2. He was shaped by a difficult upbringing

Noah was born to a black mother and a white father in South Africa in 1984, a time when interracial relationships were illegal in the country. In a recent interview with comedian Jerry Seinfeld, Noah noted that his mother actually spent time in jail over her relationship with his father, forcing her to sometimes pretend to be the family’s maid and babysitter.

Noah has also talked about how growing up with the influence of different cultures, and in the presence of a violent stepfather, influenced his comedy style and his worldview. “Literally everything has a funny side,” Noah told Seinfeld.

3. He’s no stranger to The Daily Show

Noah joined the Comedy Central show as a correspondent last December, landing the hosting gig just a few months later. In just a handful of appearances on the program, Noah sought laughs by juxtaposing recent racial and socioeconomic issues in the U.S. with his own upbringing in South Africa. Now, as the show’s host, Noah will see a lot of familiar faces in the form of colleagues such as correspondents Jessica Williams, Aasif Mandvi and Jordan Klepper, who will continue to be featured on the program.

4. The show’s style will be different

Many expect Noah’s turn as host of The Daily Show to lend an outsider’s view to the show’s tone that will see him continue to skewer American culture and politics. Another foreign-born comedian who has found success in a similar role is John Oliver, the former guest host of The Daily Show who now has his own popular weekly program on HBO. Meanwhile, Noah seems to be inclined to welcome a wide array of guests from the entertainment, corporate and political spheres. Monday’s show features comedian Kevin Hart, while New Jersey Governor Chris Christie and Whitney Wolfe (the co-founder of Tinder and current CEO of Bumble) will appear later in the week.

Speaking of politics, Noah has said that he wants to spend more time mocking both sides of the political spectrum and, specifically, he doesn’t want to specifically focus on bashing Fox News like his predecessor did. Instead, Noah will likely glean more comedy from media outlets with younger-skewing audiences, such as Gawker and Buzzfeed, as well as from social media.

5. He has big shoes to fill

Stewart is a comedy institution who hosted The Daily Show for 16 years, helping to shape the political views and the funny bones of many a millennial viewer. Any replacement faces a steep challenge, but that’s especially the case for someone like Noah, who has had limited exposure to U.S. audiences.

What’s more, Noah takes the reins at The Daily Show at a time when the late-night television landscape is particularly crowded with new faces, including Stephen Colbert (as opposed to the “Stephen Colbert” character) and James Corden on CBS (CBS), as well as former Daily Show correspondent Samantha Bee, who will have her own new show on TBS starting in January. There’s more competition than ever for late-night TV ratings, not to mention advertising dollars.