Why the Model X is so important for Tesla 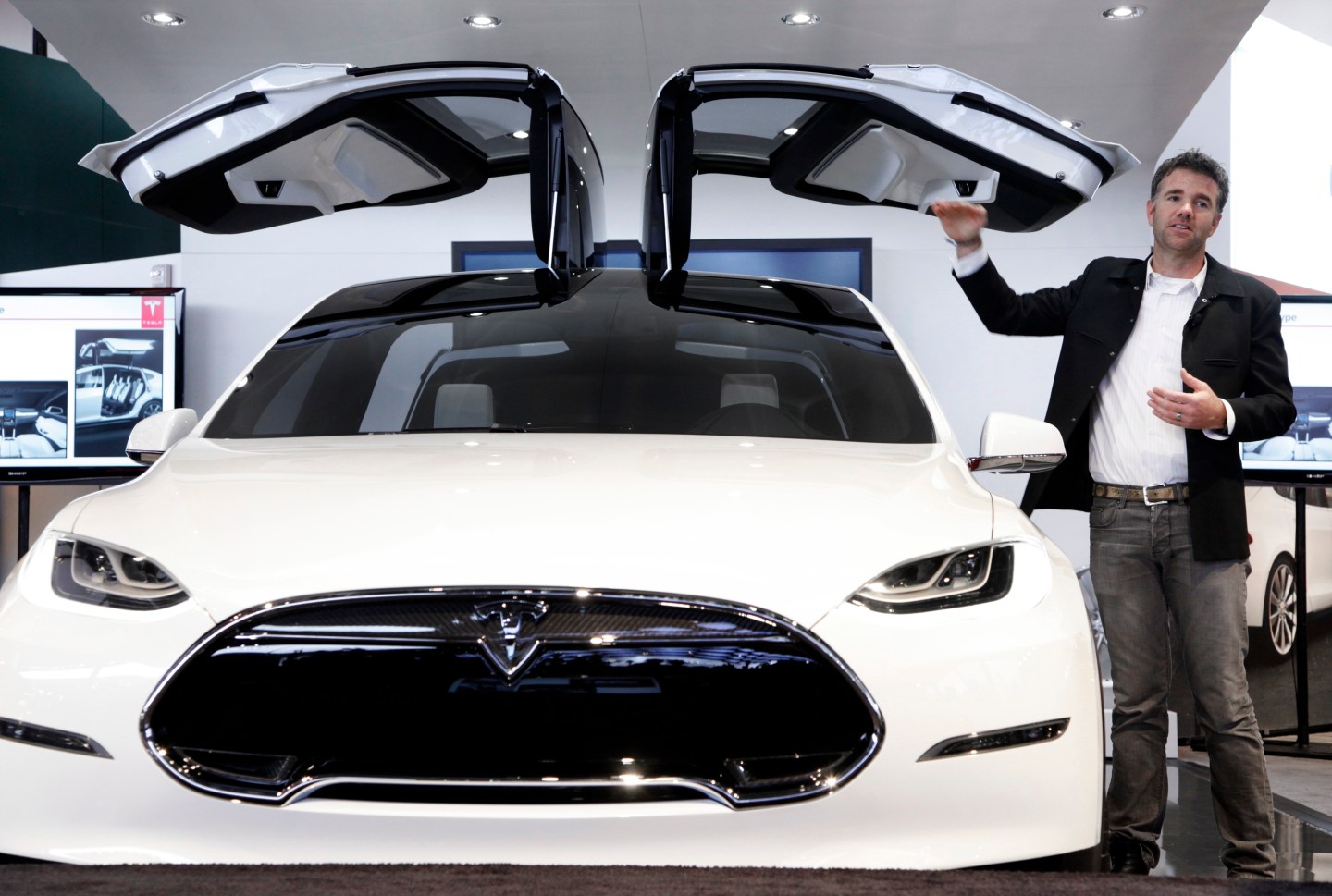 But unlike Apple’s, Tesla’s marketing extravaganzas are usually held at night and tend to have an open bar. Having been to both, I can confirm that Tesla’s are more fun.

This week on Tuesday night, Tesla (TSLA) will hold one of its most important events in months, and potentially years. At its factory in Fremont, Calif., the company will deliver the first of its Model X electric cars, a new crossover SUV, to its first customers.

The Model X is a very important car for Tesla. The company is using it to transition into selling multiple products (not just its highly-acclaimed Model S), to attract new kinds of customers (many of them women), and to significantly expand its California factory’s production.

Between the Model S and the Model X, Tesla plans to ship between 50,000 and 55,000 cars this year. Meeting that goal could be difficult because it requires increasing production of two cars at the same time at the Fremont factory.

Tesla had originally said it would ship 55,000 cars. But the company later had to downsize its prediction by acknowledging that number would be a best case scenario.

Tesla’s Tuesday night event won’t be the Model X’s unveiling. Three and a half years ago, the company showed off the car publicly for the first time at its design studio in Hawthorne, Calif., outside of Los Angeles. But since then, it has had to delay shipments repeatedly, first to the end of 2014, and now to the third quarter of 2015.

Even then, Tesla is leaving it to almost the last day of that quarter to deliver the Model X. Moreover, the company appears to be delivering only a limited number of them to “Signature reservation” holders, people who reserved them first.

Signature reservation holders appear to be the only ones who have been able to “configure” their cars by choosing the color, wheel size and interior options. When others will be able to do so, after putting deposits down on months, or years, ago is unclear.

In reality, the true test for the Model X will be over the coming months after the launch event as Tesla tries to significantly increase Model X’s production. The company won’t be able to meet its shipment goals unless manufacturing of the Model X can ramp up quickly.

Tesla’s customers have been particularly patient. They’ve been waiting to drive a Model X for months, tantalized by comments from Tesla CEO Elon Musk like, “The Model X may arguably be a better SUV than the Model S is a Sedan.” If true, it would be a major achievement because the Model S, at least a high-end version of it, broke Consumer Report’s long established testing scale.

But Musk has also said that the Model X will be priced $5,000 higher than the Model S because it’s heavier and more complex. On top of that, with added bells and whistles, and for the Signature models, a high-end Model X can cost $132,000 to $144,000 (more on Model X key stats here).

In many respects, the Model X event this week will be a little weird, as it’s largely symbolic. Attendees will likely watch half a dozen selected Model X customers receive the keys to their cars and drive away. Who knows when the other cars will ship. It could be days, weeks or months.

Tesla held a similar kind of event for its first Model S cars in 2012.

Beyond the basic shipment goals, the Model X shows how Tesla is trying to expand beyond its first big hit, the Model S. The Model X was originally supposed to borrow much of its design from the Model S.

But in recent years, Tesla has said that the Model X will diverge from the Model S far more than it originally planned. Musk, known for occasional hyperbole, has called the Model X the most difficult car to ever be built because of its unusual doors that open vertically—called gull wing, or falcon wing, doors— as well as the car’s third row of seats.

But importantly, Tesla is relying on the Model X to deliver needed revenue as it tries to get its next vehicle, the cheaper Model 3, to customers. And the company has been spending a massive amount of money trying to do that.

Tesla is using huge amounts of money to build its huge battery factory outside of Reno, Nev., as well as designing the Model 3 and getting it ready to show off next year. That’s not to mention funding the launch of its new grid battery business, which will sell batteries to utilities and building owners to store energy, and basic spending on Model S upgrades and new software like autopilot.

The Financial Times recently noted that by the end of 2014, Tesla had spent $3.3 billion on both capital expenditure and research and development. That comes out to about $40,000 spent per car sold so far. In the first six months of this year, Tesla spent another $760 million.

To support the spending spree Tesla has been borrowing and selling shares. Musk has said he’s spending heavily in order to turn Tesla into a company that could be worth $700 billion in a decade, or the same market cap as Apple (AAPL) had earlier this year. Critics have called Tesla one of the most hyped and over valued companies in the world.

If Musk’s ambitions are realized, you can expect the company to show off the design of the Model 3 for the first time at a flashy launch event next year. And if the company consistently reaches its goals, the world could witness a similar Model 3 delivery event a couple of years down the road.

Revisit Fortune.com this Tuesday at 7 p.m. PT for Fortune’s live coverage of the Model X launch.

To learn more about Tesla’s cars watch this Fortune video: