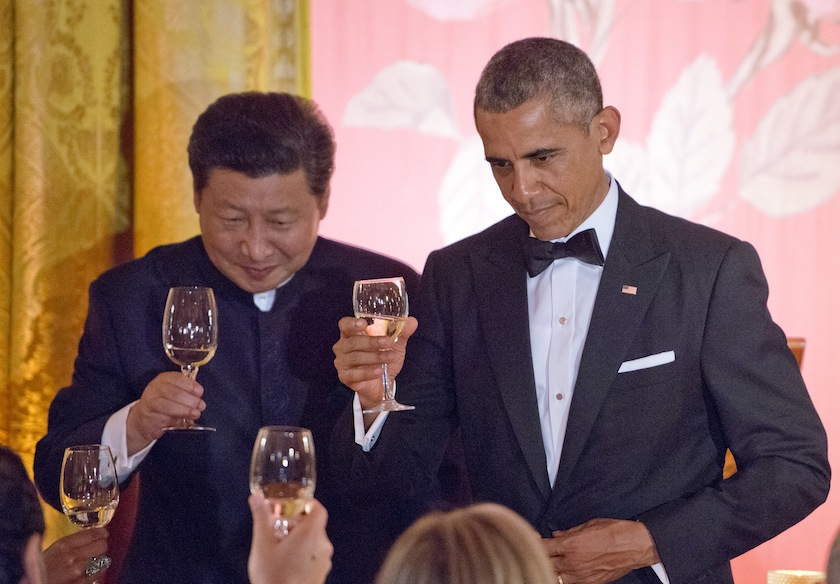 WASHINGTON, DC - SEPTEMBER 25: President Barack Obama and President Xi Jinping of China exchange toasts during a state dinner at the White House September 25, 2015 in Washington, DC. The two leaders will tackle a range of issues including regional tensions in Asia and cyber crimes. (Photo by Ron Sachs-Pool/Getty Images)
Getty Images

For those concerned that the U.S. and China are headed toward another cold war, the just-concluded summit between Presidents Barack Obama and Xi Jinping should be greeted with enormous relief.

If nothing else, the summit has produced a much-needed pause in the downward spiral in bilateral relations in the last two years, even though the most contentious issues—cyber-attacks and the South China Sea—were not completely resolved.

For American business executives, though, it may be difficult to determine the economic significance of the U.S.-China summit. This is odd because commerce constitutes the most important pillar of the China-U.S. relationship. Indeed, Xi invested almost the same amount of time hobnobbing with leading U.S. businessmen as in talks with President Obama and American political leaders. And official Chinese media claims that 49 business deals were signed during Xi’s trip.

The trouble is, however, most of the signed agreements are relatively minor and company-specific. The most consequential agreements or plans announced at the summit are incomplete and require further negotiations. So, while the summit may have brightened U.S.-China ties economically, nothing should be taken for granted for now.

The two presidents reached a “common understanding” related to a ban on state-sponsored commercial cyber espionage. This probably was the most praiseworthy business development from Xi’s trip. If Beijing honors this commitment and puts an immediate end to its cyber intrusions targeting U.S. firms, this will remove a major source of irritation among American business leaders. However, one should not be overly optimistic. The only concrete step that will come out of this understanding is the establishment of two groups, one of experts and the other of senior officials, to turn this agreement into action. Complex negotiations over definitions and verification protocols lie ahead. The working groups will need to come up with a clear distinction between civilian and military business activities carried out by U.S. companies. For Beijing, hacking into any firm that receives contracts from the Pentagon is legitimate national security espionage, but not commercial espionage. Since the U.S. also conducts cyber espionage activities against China, breaching the computer systems of large state-owned enterprises, such as ChinaMobile and Baosteel, is also justifiable national security espionage.

With its focus almost exclusively on commercial cyber espionage, the media may have overlooked the most significant economic deal for which Xi’s visit has injected new momentum —a U.S.-China bilateral investment treaty (BIT). The two countries have been negotiating a BIT for years but an agreement proved elusive. With its struggling economy, Beijing now regards a U.S.-China deal on BIT as a top priority. Chinese leaders think a BIT will signal American confidence in their economy, and American supporters argue that it will make the Chinese market more accessible to U.S. firms. But there are serious obstacles ahead. Most importantly, both sides have yet to agree on sectors in which investments will not be allowed. Even though Chinese and U.S. negotiators have recently exchanged the so-called “negative lists” naming these off-limits industries, the two sides are far apart. At the summit, Obama and Xi reiterated that a “high-quality” BIT will be the most important item on the bilateral economic agenda. But with only 15 months left in office, time is fast running out for Obama to close such a deal.

The unilateral announcement by Xi that China will launch a cap-and-trade system to limit greenhouse gas emissions is arguably the most consequential outcome of the summit. Coupled with a joint U.S.-China statement on climate change, Xi’s move will help build positive momentum for the Paris climate conference in December this year. It will also make a more compelling political case for taking aggressive action on climate change in the U.S., which invented the cap-and-trade concept but has resisted adopting such a system to cut greenhouse gas emissions. Opponents to climate change policies have insisted that the U.S. should not make any concessions unless China, the world’s largest greenhouse gas emitter, moves first. Xi’s surprise announcement has undercut their position.

But, as with other Chinese commitments made at the summit, Xi’s declaration that such a system will start operating in 2017 does not guarantee its effective implementation. Beijing has released no details about the system. Given its lack of transparency, China has a steep hill to climb in making a cap-and-trade system work and subsequently shame the American political establishment into action on climate change.

Despite the uncertainties surrounding cyber espionage, a U.S.-China BIT, and climate change policies in both countries, we must give pledges of cooperation made by China at the Washington summit the benefit of the doubt. Adversarial dynamics have driven bilateral relations to their lowest point in the post-Cold War era, so any efforts to prevent a U.S.-China conflict deserve applause.