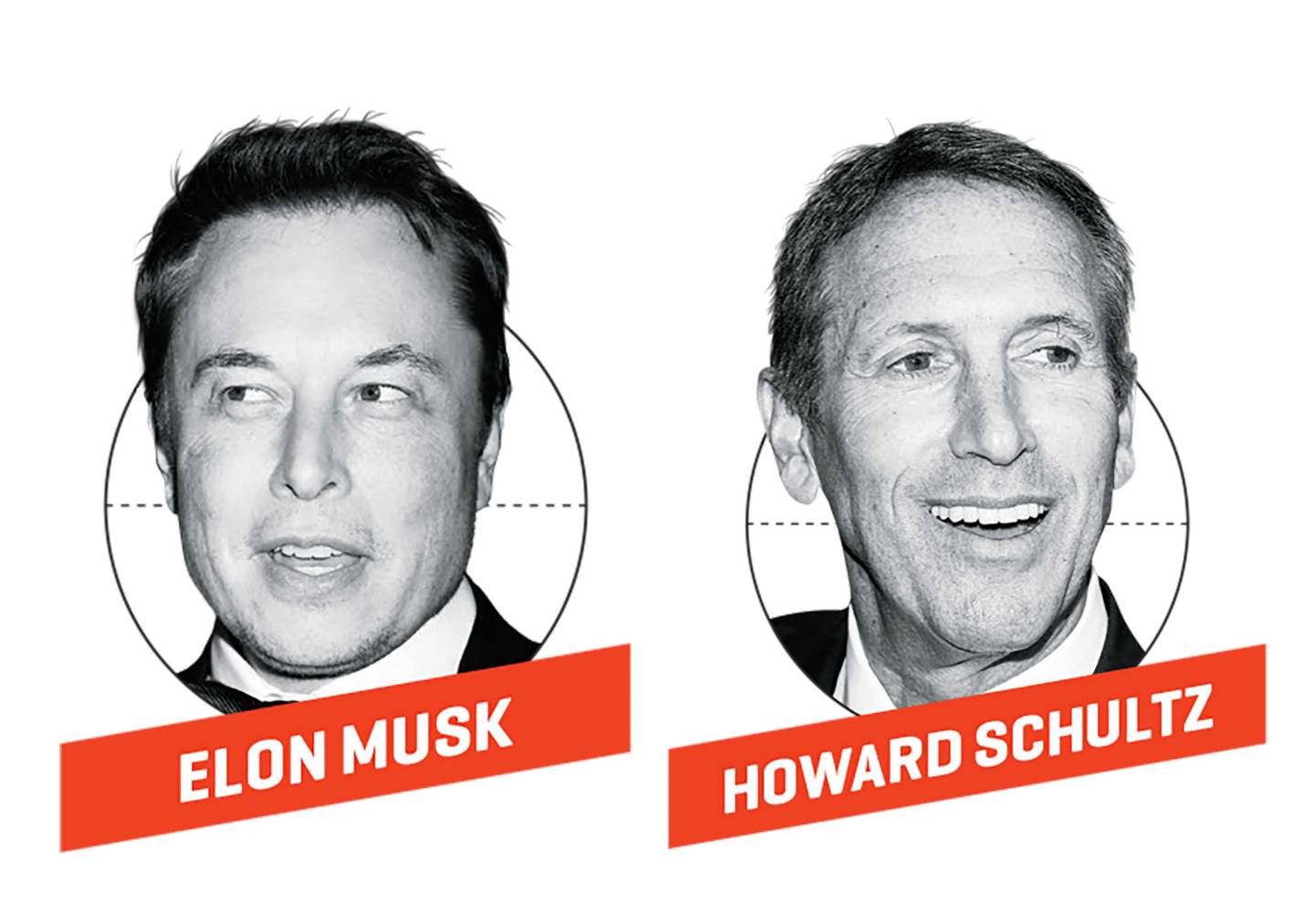 We asked the members of this year’s 40 Under 40 to name the CEO they most admire. The most popular responses? Musk, founder of Tesla and SpaceX, and Schultz, the mega-successful Starbucks CEO.

Musk has appeared on the 40 Under 40 in previous years and, appropriately, is a member of our new 40 Under 40 Hall of Fame. Musk was named by five people on this year’s list: Kayvon Beykpour, the Periscope founder; Michelle Dipp of OvaScience; Orion Hindawi from cybersecurity firm Tanium; James Park, CEO of FitBit; and Logan Green, a cofounder of Lyft, who said Musk’s “ability to build multiple businesses around the most amazing, aspirational, moon-shot ideas is truly inspiring.”

Even more inspiring to these people, apparently, is Howard Schultz: six of the new honorees said the Starbucks chief is the executive they most admire. He was named by: Josh Goldin of private equity firm Alliance Consumer Growth; shaving retailers Andy Katz-Mayfield of Harry’s and Michael Dubin of Dollar Shave Club; exercise exec Melanie Whelan of SoulCycle; Julia Hartz of Eventbrite; and John Zimmer of ride-sharing service Lyft. Schultz “has always believed Starbucks is so much more than just a coffee company, and his passion is palpable in every message he sends to his employees and his shareholders,” says Whelan.

With 11 fans among the 40 Under 40, Musk and Schultz dominated, but other legendary CEOs got shout-outs too, including some you may not have heard of recently. Chris Wanstrath, the GitHub CEO, admires Alfred P. Sloan, who ran General Motors from 1923 to 1956. “He had a really interesting career and published a great memoir, My Years With General Motors. It’s a fascinating look at some of the problems one of the first big companies faced.” Yehuda Shmidman, CEO of Sequential Brands, thought of big dealmaker Bruce Wasserstein. “Unfortunately, I never had the opportunity to meet him in person, but ever since reading Barbarians at the Gate years ago, I always admired ‘Bid ’em up,’ Bruce’s innovative—and BIG-thinking—approach to dealmaking.”

But Lisa Falzone of payments-hardware company Revel admires one CEO so much that she modeled her company’s philosophy after an approach that she believes he embodies. Richard Branson, she says, “puts an element of fun into business. One of the reasons we named our company Revel is to take pleasure in something to have fun to revel in something. Fun has been a part of our brand.”