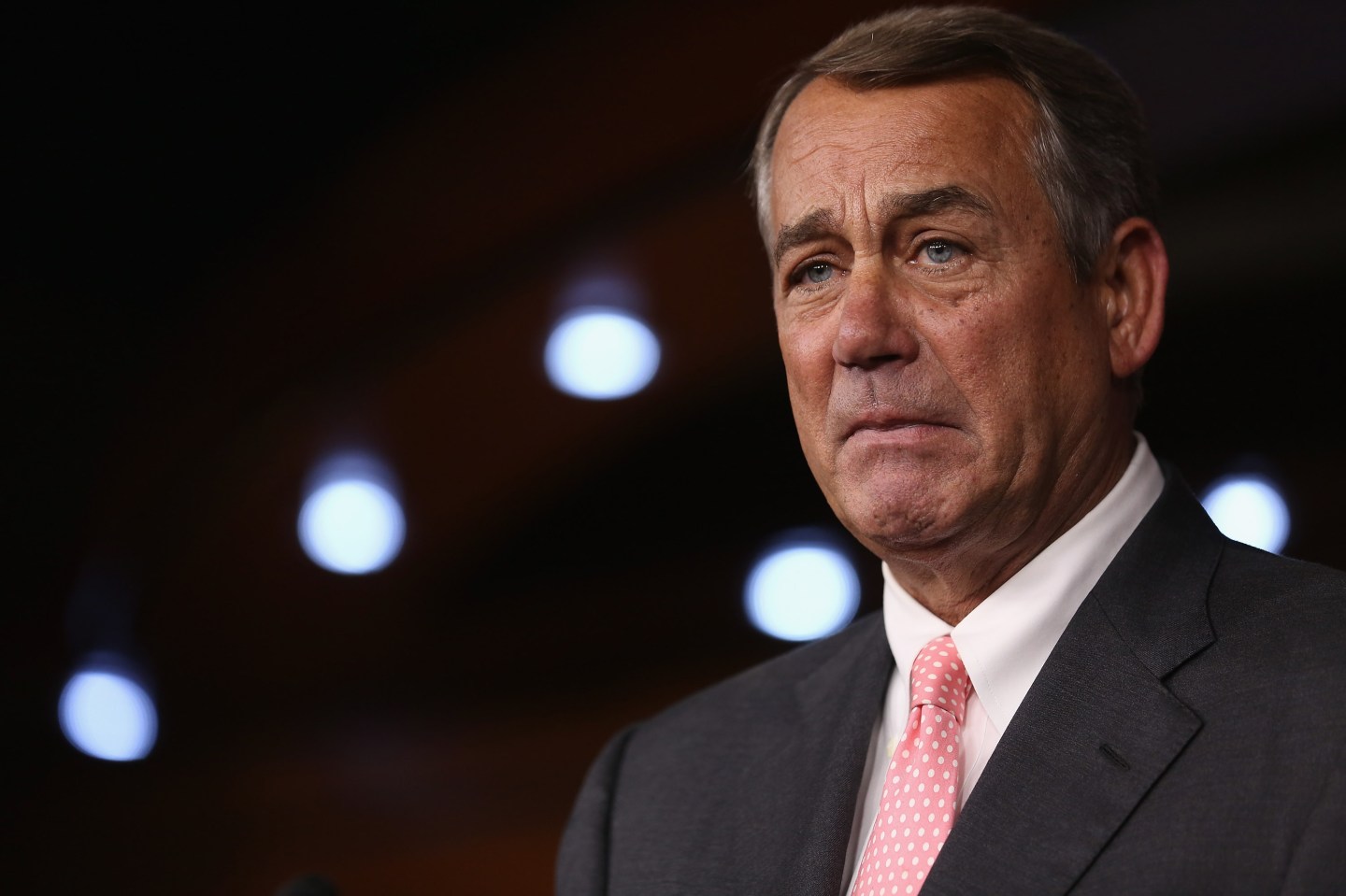 WASHINGTON, DC - SEPTEMBER 25: Speaker of the House John Boehner (R-OH) announces that he is retiring from the House and stepping down as Speaker at the end of October during a news conference at the U.S. Capitol September 25, 2015 in Washington, DC. After 25 years in Congress and five years as Speaker, Boehner said he decided this morning to step down after contemplation and prayer. (Photo by Chip Somodevilla/Getty Images)
Chip Somodevilla Getty Images

House Speaker John Boehner, in the first interview since his shock resignation announcement on Friday, called out as “false prophets” the rightwing fringe that forced his hand.

“The Bible says beware of false prophets, and there are people out there spreading noise about how much can get done,” Boehner said Sunday on CBS’ “Face the Nation.”

The Ohio Republican, a 25-year House veteran, had been facing a vote to oust him from his leadership position pushed forward by a conservative rump group. Those Tea Party-aligned defectors were unhappy with Boehner’s stewardship generally but also by what they viewed as his weak approach to stripping federal support for Planned Parenthood. And they have been angling to shut down the government over the issue.

Boehner on Sunday pledged that won’t happen. Instead, he said the House will adopt a short-term patch from the Senate that will fund government operations into December. And Republicans will establish a special committee to investigate Planned Parenthood, the women’s healthcare provider facing a firestorm of controversy over undercover videos showing workers discussing fetal tissue research.

Boehner was eyeing retirement, anyway, with plans to announce on his Nov. 17 birthday that he would step down at the end of the year. On Sunday, he said he moved the announcement up in part to spare colleagues a politically difficult vote to defend him, though he’s confident he would have survived it easily, “with 400 votes, probably.”

With a month left before Boehner hands back his gavel, some in Washington are wondering whether he will attempt a legislative blitz to pass big-ticket priorities held up by conservative opposition, such as immigration reform, a major budget deal, and new infrastructure spending. Boehner appeared to curb expectations, explaining, “I’m going to make the same decisions the same way I have over the last four-and-a-half years, to make sure that we’re passing conservative legislation that is good for the country.” But he added, “I don’t want to leave my successor a dirty barn. So I want to clean the barn up a little bit before the next person gets there.”

Boehner used his first valedictory sit-down to list the accomplishments of his term, name-checking spending reductions, a deal to extend most of the Bush tax cuts, and a (relatively modest) stab at entitlement reform. In the same breath, he noted that he got all of that done without the help of his most conservative members, who argued that those packages didn’t go far enough.“Really?! This is the part that I really don’t understand,” the speaker said, pointing out that the framers of the American system intended for government to move deliberately. On whether his detractors are unrealistic in their expectations, Boehner said, “Absolutely!” But he also suggested they may be more cynical than they let on insofar as they “whip people into a frenzy believing they can accomplish things that they know, they know, are never going to happen.”

And when it comes to Texas Sen. Ted Cruz, a Tea Party tribune and outspoken critic of the speaker, Boehner referred to the assessment he gave at an August fundraiser in Colorado. At that event, Boehner called Cruz a “jackass.”