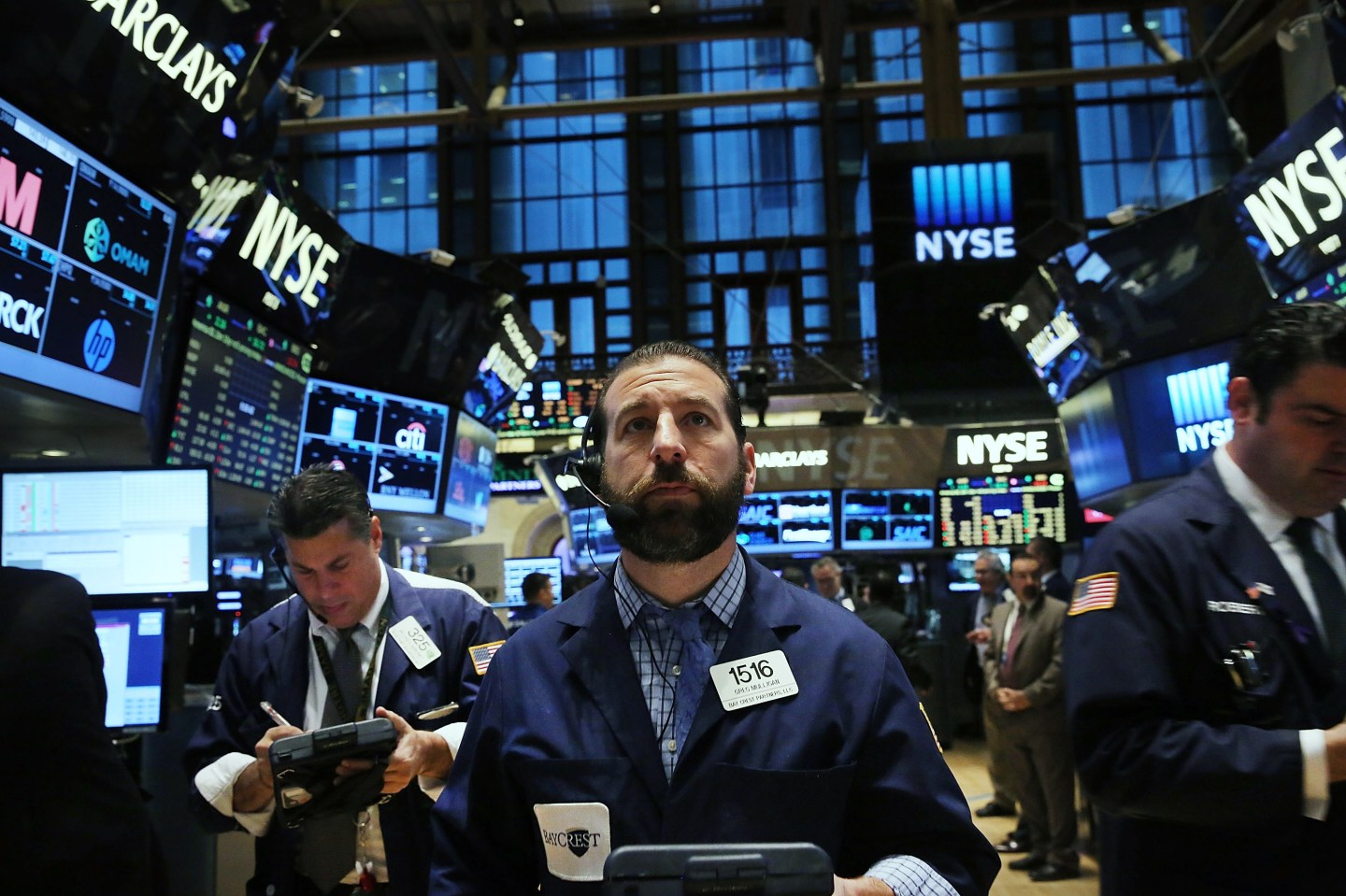 Forecasts for third-quarter S&P 500 earnings now call for a 3.9 percent decline from a year ago, based on Thomson Reuters data, with half of the S&P sectors estimated to post lower profits thanks to falling oil prices, a strong U.S. dollar and weak global demand.

Expectations for future quarters are falling as well. A rolling 12-month forward earnings per share forecast now stands near negative 2 percent, the lowest since late 2009, when it was down 10.1 percent, according to Thomson Reuters I/B/E/S data.

That’s further reason for stock investors to worry since market multiples are still above historic levels despite the recent sell-off. Investors are inclined to pay more for companies that are showing growth in earnings and revenue.

The weak forecasts have some strategists talking about an “earnings recession,” meaning two quarterly profit declines in a row, as opposed to an economic recession, in which gross domestic product falls for two straight quarters.

“Earnings recessions aren’t good things. I don’t care what the state of the economy is or anything else,” said Michael Mullaney, chief investment officer at Fiduciary Trust Co in Boston.

The S&P 500 is down about 9 percent from its May 21 closing high, dragged down by concern over the effect of slower Chinese growth on global demand and the uncertain interest rate outlook. The low earnings outlook adds another burden.

This week, Caterpillar slashed its 2015 revenue forecast and announced job cuts of up to 10,000, among many U.S. industrial companies hit by the mining and energy downturn. Also this week, Pier 1 Imports cut its full-year earnings forecast, while Bed Bath & Beyond gave third-quarter guidance below analysts’ expectations.

“We are continuing to work through the near-term issues stemming from our elevated inventory levels and have adopted a more cautious and deliberate view of the business based on our first-half trends,” Jeffrey Boyer, Pier 1 chief financial officer, said in the earnings report.

On the other hand, among early reporters for the third-quarter season, Nike shares hit a record high after it reported upbeat earnings late Thursday.

Negative outlooks from S&P 500 companies for the quarter outnumber positive ones by a ratio of 3.2 to 1, above the long-term average of 2.7 to 1, Thomson Reuters data showed.

“How can we drive the market higher when all of these signals aren’t showing a lot of prosperity?” said Daniel Morgan, senior portfolio manager at Synovus Trust Company in Atlanta, Georgia, who cited earnings growth as one of the drivers of the market.

To be sure, the vast majority of companies usually exceed their earnings forecasts when they report real numbers.

“This part in the earnings cycle is typically the low point for estimates,” said Greg Harrison, Thomson Reuters’ senior research analyst. In the first two quarters of 2015, companies went into their reporting season with analysts predicting a profit decline for the S&P 500, and in both quarters, they eked out gains instead.

In the last two weeks, analysts have dropped their third-quarter earnings predictions by about 0.3 percentage point. There was no change in estimates in the final weeks of the quarter in the first two quarters of 2015.

And companies may be snapping their streak of squeezing profits out of dismal revenues. For the first time since the second quarter of 2011, sales, seen down 3.2 percent in the third quarter from a year ago, are not projected to fall as fast as earnings. Companies have been bolstering their earnings per share figures by buying back their own shares and thus reducing their share counts, and that may happen again this quarter.

Even with the recent selloff, stocks are still expensive by some gauges. The S&P 500 index is selling at roughly 16 times its expected earnings for the next 12 months, lower than this year’s peak of 17.8 but higher than the historic mean of about 15. The index would have to drop to about 1,800 to bring valuations back to the long-term range. The S&P 500 closed at 1,931.34 on Friday.

Moreover, forward and trailing price-to-earnings ratios for the S&P 500 are converging, another sign of collapsing growth expectations. The trailing P/E stands at about 16.5, Thomson Reuters data shows. Last year at this time, the forward P/E was also 16 but the trailing was 17.6.

The last period of convergence was in 2009 when earnings were declining following the financial crisis.

The 3.9 percent estimated decline in third-quarter profits – down sharply from a July 1 forecast for a 0.4 percent dip – would be the first quarterly profit decline for the S&P 500 since the third quarter of 2009.

Energy again is expected to drag down the S&P 500 third-quarter forecast the most, with an expected 64.7 percent decrease in the sector. Without the energy sector, the forecast for third-quarter earnings shows a gain of 3.7 percent.

Earnings for the commodity-sensitive materials are expected to fall 13.8 percent, while industrials’ earnings are seen down 3.6 percent.