These startups are delivering cocktails to your doorstep 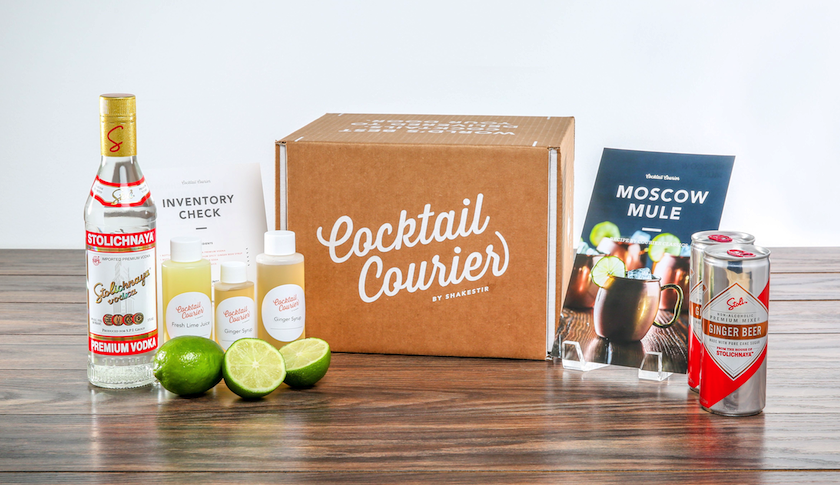 How many of these cocktail ingredients do you have at home: Avion Reposado tequila, boiron pineapple puree, guajillo chile syrup, fresh squeezed lime juice, tajin chile salt, and a whole lime?

Cocktail Courier is betting your answer is: Not many. All those ingredients go into the “Little Market,” which is one of a number of drink kits the cocktail home-delivery service builds, filled with spirits, mixers, fruits, and other garnishes to make do-it-yourself cocktails a smoother pour.

“The cocktail world is in an exciting time, and the consumer has this willingness to learn more about cocktails,” says Scott Goldman, co-founder of Cocktail Courier, which delivers kits across 40 states.

Along with a handful of rivals, Cocktail Courier joins a sub-segment of the broader on-demand alcohol delivery business popularized by Minibar, Drizly, and Thirstie. The D.I.Y. cocktail kits generally are shipped under two business models: monthly subscriptions or standalone orders.

Cocktail Courier’s drinks cost between about $5 and $13, and the company generates about half its business from subscription plans that can run as frequently as every week. The rest of the business comes from standalone orders, and Cocktail Courier says about two out of every three customers are saying, “I’ll have another.” Rival SaloonBox, a Kickstarter-backed startup that launched this week, is subscription-only, while Instapour delivers cocktails on demand.

“Cocktails aren’t harder to make than pasta sauce, but a high percentage of people will go out to make pasta sauce,” says Derek Brown, a mixologist and co-owner of four bars in Washington, D.C. “When it comes to a cocktail, there is an intimidation factor that is pretty strong.”

Delivery startups want to take that fear out of crafting drinks as complex as the Little Market. Most of their cocktails feature around half a dozen ingredients and come in precise measurements with detailed instructions.

Home delivery is a new bet on the strength of a cocktail culture that has spread across U.S. restaurants and bars. The renaissance for carefully crafted cocktails began in the 1980s but has really proliferated over the past decade, fueled by trendy bars in major cities where mixologists are willing to experiment with classic cocktails or new concoctions. They are even helping bring back liquors that had long been left for dead. The rye whiskey comeback, for example, can thank big city bartenders for boosting sales.

Cocktail Courier kicked off its business in New York City at the end of 2014 and expanded to Chicago a few months later, shipping kits stocked with as many as seven ingredients with the goal to get them to a customer’s home within an hour or two.

But the startup learned that cocktail lovers don’t order their kits so spontaneously, so it pivoted to a delivery model across most states that takes a few days to ship. The company also streamlined its ingredient list and offers a subscription service that costs $40 per month including shipping. SaloonBox’s subscription costs $32.50 a month, plus shipping and handling.

Instapour, which operates in New York City and Los Angeles, is chasing the on-demand business. Kits cost about $50, or under $8 a drink, and are stocked with all ingredients, a shaker, and three “Instapour” blends. The company aims to fulfill deliveries within an hour.

The “Blue Apron” of booze

Cocktail delivery startups like to compare themselves to Blue Apron, saying the experience and service they provide is very similar to what the food delivery provider has popularized. It’s a wise comparison: Blue Apron earned a $2 billion valuation earlier this year after the company’s latest funding round.

How often, though, will imbibers want to order cocktail kits? Food is a daily necessity, but alcoholic beverages are of course, an indulgence. Cocktail Courier is less than a year old, while Instapour, and SaloonBox launched this month, so it’s too soon to tell if these are sustainable, profitable business concepts. But for now, these cocktail delivery startups say demand is exceeding expectations.