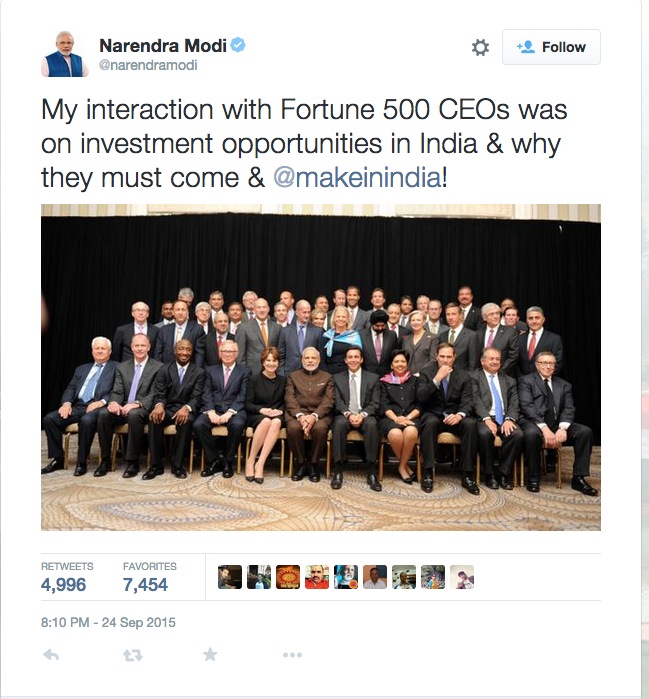 The popular prime minister – he has an astonishing 87% favorability rating in India, according to my former colleagues at Pew Research – invited the CEOs to give their advice on how he can accelerate economic growth in India. And the CEOs were not shy in responding. They praised the prime minister’s efforts to improve the climate for business, but highlighted a host of obstacles – complicated regulations, excessive permitting, confusing bureaucracy, poor infrastructure, overlapping local taxes, etc. – and urged him to pick up the pace of change. Said one: “It’s not an easy place to do business.”

The prime minister acknowledged their concerns, and pledged to speed up efforts to reduce the role of government in business. “The world is not going to wait for us. I know that,” he said.

The high turnout from the CEOs highlights the prime position India holds in today’s global economy. With China slowing (several of the CEOs had met with President Xi Jinping in Seattle Wednesday), India’s 7.5% growth rate makes it the fastest growing major economy in the world today, and many of the CEOs cited plans to expand there.

Group shot here. My job as moderator was to make sure everyone in this large and voluble group got to speak (they did). Excellent dinner courtesy of New York chef Vikas Khanna.