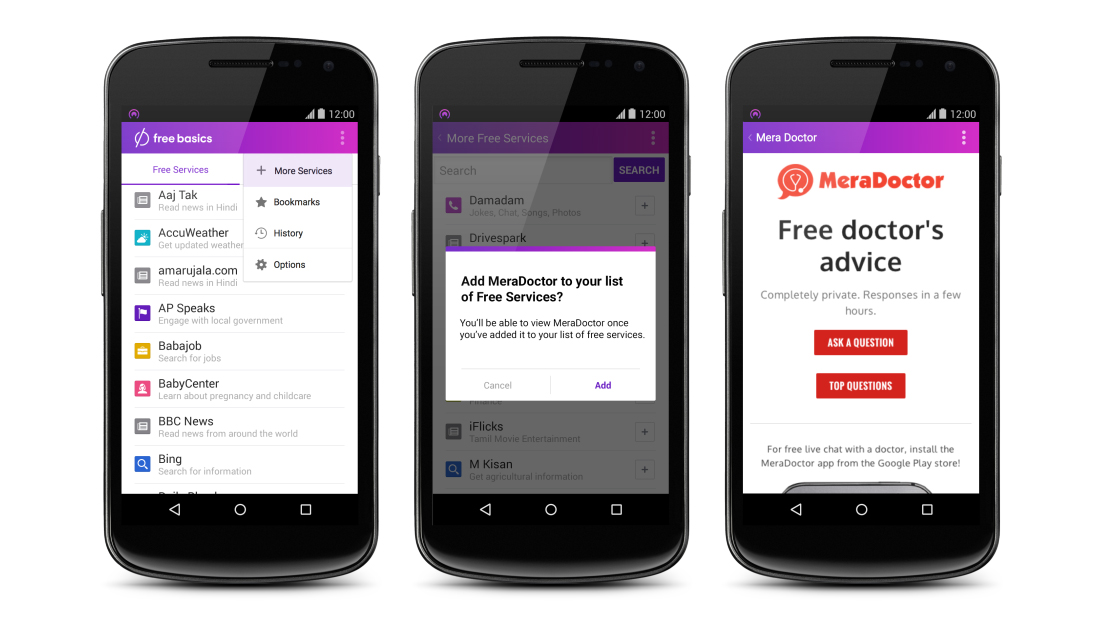 You may not be aware that Facebook is behind a free mobile application called Internet.org.

On its face, Internet.org is an altruistic endeavor that lets mobile users in developing countries use a selection services without paying for data. As Facebook said in May when it announced the effort: “This is a set of basic websites and services to introduce people to the value of the internet, and that we hope add value to their lives.These websites are very simple and data efficient, so operators can offer these for free in an economically sustainable way. Websites do not pay to be included, and operators don’t charge developers for the data people use for their services.”

Critics, on the other hand, have said that it’s nothing of the sort—a successful Internet.org app is a way for Facebook (FB) to push its services over others among users that haven’t yet expressed a preference.

The company announced on Thursday that it has renamed the app and mobile website to “Free Basics by Facebook” in an effort to distinguish it from other projects under the Internet.org initiative. The company didn’t say whether the change was prompted by the criticism, but it certainly helps address it. It’s now available to people in 19 countries, includes 60 new services developed by independent developers, and the mobile web version newly supports HTTPS for additional security. The rebranding isn’t expected to disrupt existing users.

There are two trends at work with this announcement. The first is the fact that there remains an enormous population across the globe that still lacks regular access to the Internet and its services. According to the Pew Research Center, just a small sliver of the population in many developing nations enjoys Internet access or owns a smartphone. Take Kenya, for example, one of the countries that the Internet.org initiative serves; just 29% of people own a smartphone or regularly access the Internet. (Even in the U.S., which Internet.org does not serve, 13% are still offline, so to speak.) To companies like Facebook, bringing more of the world online is both a boon to the Internet economy and society.

The other trend is Facebook’s embrace of outside development. Facebook originally worked with its telecommunications partners to select services to bundle into its Internet.org app, but the decision was met with criticism from Net Neutrality advocates in India who argued that the lack of transparency around the selection process violated basic Internet neutrality principles. Facebook CEO Mark Zuckerberg denied the allegations—making all apps and services free without winnowing them down would be too costly, he said—but the company quickly responded anyway by opening up its platform.

It’s unlikely that the name change will quiet Facebook’s critics, but it positions the Internet.org initiative to be more expansive than a set of mobile services. Bigger questions remain: How will the world’s offline population come online, and how quickly? Which companies or organizations will help them do so? And to what degree will they benefit?

Narendra Modi, India’s prime minister, is scheduled to visit Facebook’s headquarters on Sunday for a televised question-and-answer session with Zuckerberg.