Popemania is giving these 6 brands a boost 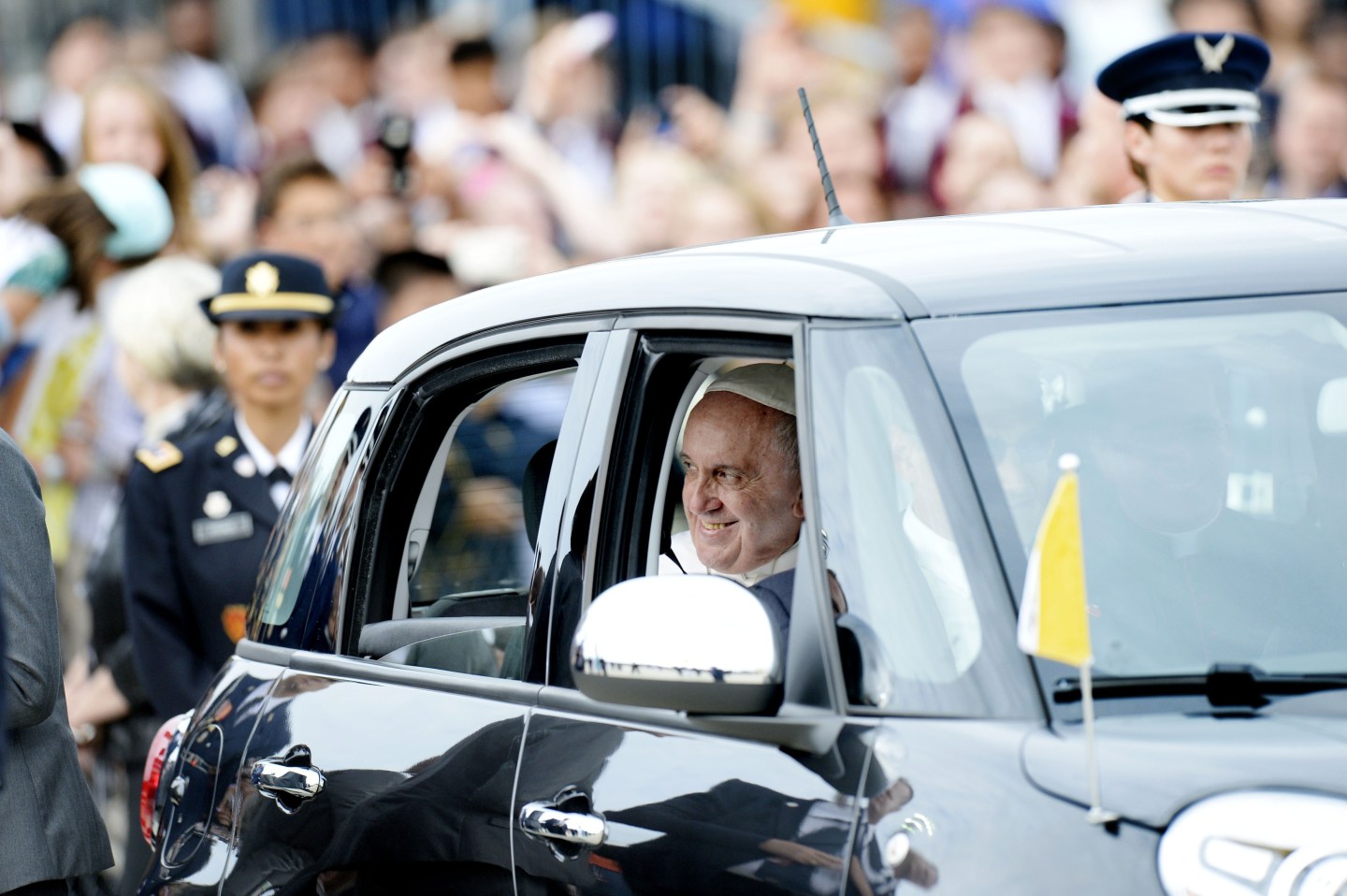 JOINT BASE ANDREWS, MD - SEPTEMBER 22: (AFP OUT) Pope Francis departs in a Fiat after arriving from Cuba September 22, 2015 at Joint Base Andrews, Maryland. Francis will be visiting Washington, New York City and Philadelphia during his first trip to the United States as Pope. (Photo by Olivier Douliery-Pool/Getty Images)
Photograph by Olivier Douliery — Getty Images

The visit of Pope Francis I has been the source of a lot of buzz about religion, income inequality, immigration, the environment, and corporate brands.

Yes, brands. Just ask Fiat. The Pope’s choice of the 500L as his ride has received as many press mentions as a Donald Trump outburst. It’s not the first time Fiat was blessed with such publicity. When Pope Francis arrived in Rio de Janeiro for the first time after becoming pontiff, he got about town in a Fiat Idea. The model, according to the New Yorker, had been a middle-class Brazilian favorite, but became a little hotter after.

Sponsorship marketing is old hat. Spend enough and you can call your brand the official protein drink of the Sochi 2014 Olympic Winter Games. Hyundai became the official NFL auto sponsor earlier this year. NASCAR drivers’ firesuits can barely be seen under the forest of corporate logos. Intel this year was a cosponsor of New York Fashion Week. There’s even an “Official Airline” of San Francisco Pride Parade.

But there’s some publicity that money can’t easily buy, and the first visit of Pope Francis I to the United States from September 22 to September 27 is an example. No company names on the vestments, no corporate banners adorning the golf cart that will help ferry the pontiff about his rounds. But some companies, business owners and celebs are getting a papal bump because they’re associated, in one way or another, with the pontiff’s visit to the U.S. — or, in part, because they fit into the symbolism Pope Francis uses. Instead of being driven around Washington, D.C. in one of those big black limousines, Pope Francis rode around in a fuel-efficient Fiat 500L, emphasizing his concern for the environment and moderate economic consumption.

The association is one that can’t be beaten because of the status that Francis currently enjoys. He’s fourth on the list of the top 50 leaders in the world. His Twitter account has 7.2 million followers. Francis has a 90% favorability rating among U.S. Catholics — and 70% among all adults in the country.

That’s one heck of a halo. Here are six corporate or personal brands that got received a PR boost because of their involvement with the Pope’s visit to the U.S.

Wing of an Alitalia Airbus A321, taking off from Roma Fiumicino International airport, September 28, 2012.Photograph by Alexander Klein/AFP/Getty Images

Italian airline Alitalia has had a hard time of late. The Italian airline saw a $148 million loss for the first half of 2015 as competitors wooed away its customers. On September 18, CEO Silvano Cassano resigned less than a year after taking the job. But on September 19 there was good news, as Pope Francis boarded an Alitalia Airbus A330-200, first for Cuba and then the U.S. The Vatican chartered the jet, referred to as “Shepherd I” for the trip.

Fiat has seemed to get the biggest brand boost during this papal trip. With dozens of major media mentions, it’s receiving the type of positive press mentions that are the drooling desire of PR representatives.

Pope Francis in his Jeep Popemobile during a visit to Ecuador in July 2015.Photograph by Guillermo Granja — Reuters

Even though Fiat has been getting a lot of press, it’s not the only auto brand getting a papal lift. For a religion more than 2,000 years old that, until 2014, conducted all its business in Latin, one of the oddest terms associated with the papacy is the “Popemobile.” The informal name for the car that carries the Pope along processional routes dates back to 1930, when it was first used for the Mercedes-Benz Nürburg 460 that carried Pope Pius XI. For this trip it is a white Jeep Wrangler, probably with a glass-front roof and open sides.

The Pope has to sit sometimes, which is why in New York there will be a chair, custom-built by day laborers who also happen to be talented carpenters. But at Independence Hall in Philadelphia, Francis and four cardinals will each sit on a $1,490 armed dining chair donated by iconic American furniture manufacturer Thos. Moser, which is donating the furniture. The company also built a brace for the 150 year-old fragile Lincoln Lectern, used by the President when he gave the Gettysburg Address, from which Francis will speak in Philadelphia. Thos. Moser also created a black walnut replica of the Lectern, in case the stand needed a stand-in. [Update: An earlier version incorrectly referred to the chair as a Catena Arm Chair. The Thos. Moser chair shown is actually a Harpswell Chair with custom-embroidered Liberty Bell back, which the company is providing for Pope Francis’ use.]

Buddy Valastro is a surprise guest on ABC’s The Chew, Wednesday, November 12, 2014.Photograph by Jeff Neira — ABC via Getty Images

Buddy Valastro, the Hoboken bakery owner who came to cable TV fame as the Cake Boss, gets a high-profile boost and fulfillment of a lifelong professional dream. The devout Catholic baker was asked to create a cake to serve when Francis visits Philadelphia’s Festival of Families. At least word, Valastro was torn between making the dessert look like the Vatican or the Pope’s hat.

A number of entertainers will be performing before the Pope, including Jennifer Hudson and Harry Connick, Jr., in Madison Square Garden. But at the World Meeting of Families in Philadelphia on September 26, Aretha Franklin, the Queen of Soul will headline a lineup including Italian tenor Andrea Bocelli, the Philadelphia Orchestra, and Sister Sledge, with Mark Wahlberg acting as master of ceremonies before an anticipated crowd of 750,000. All the performers are donating their time. The 72-year-old Queen of Soul called the opportunity a “blessing,” all of which seems entirely appropriate.

For more on Pope Francis’ visit, watch this Fortune video: