Can Pope Francis save Alitalia? 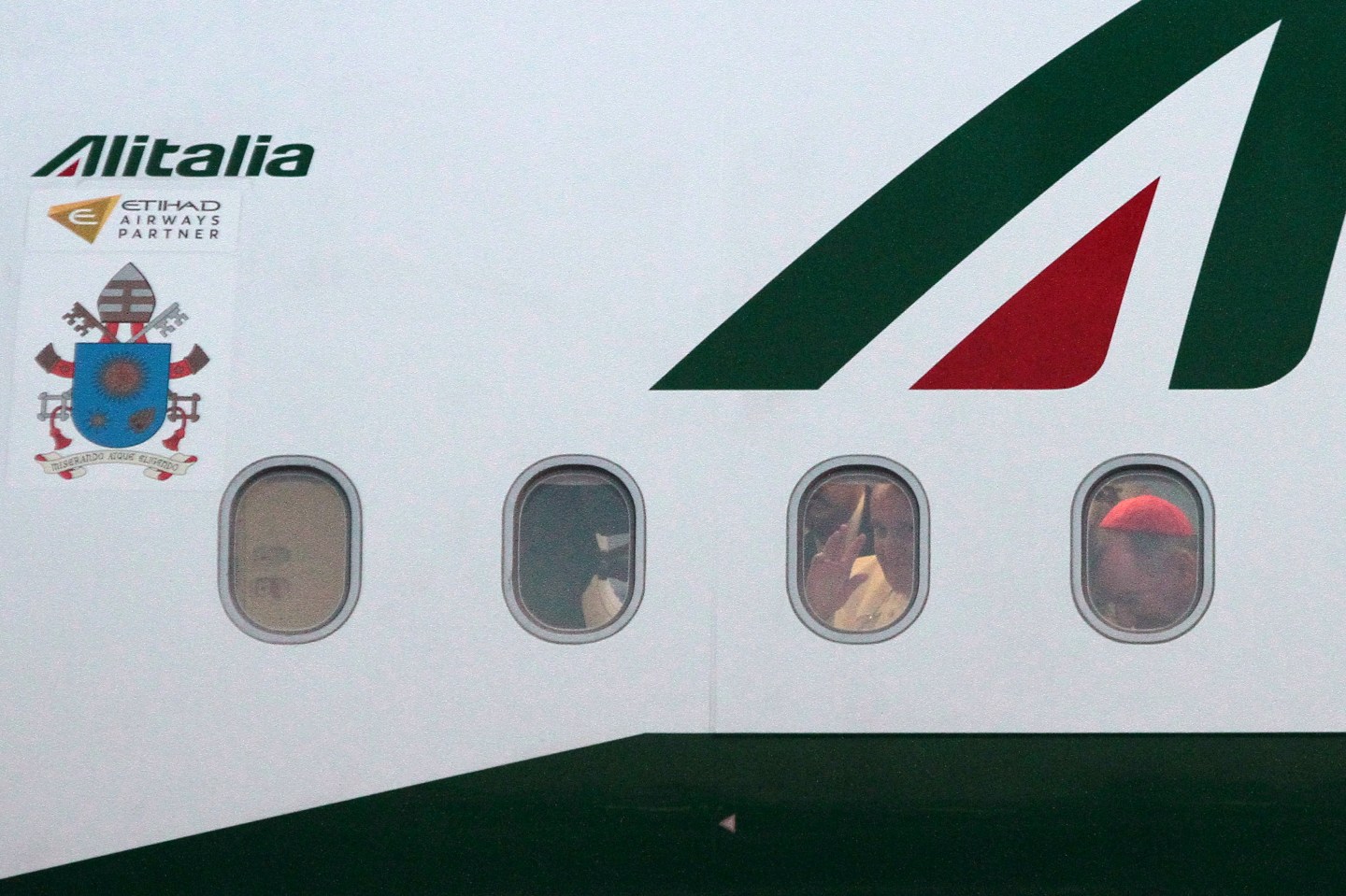 Pope Francis waves through the window of an airplane at the Sarajevo airport, June 6, 2015. REUTERS/Stringer - RTX1FEXR
Photograph by Reuter

On Friday, Sept. 18, Alitalia announced that its CEO, Silvano Cassano, was leaving after less than a year on the job. Although the Italian flag carrier insisted that his departure wasn’t related to its weak financial performance, it followed the Cassono news by posting a $148 million loss for the first half of 2015. Alitalia’s prospects appeared to improve when Etihad Airways of Abu Dhabi bought 49%, and effective control, of the ailing airline last August as part of a $2 billion rescue plan.

But since then, discounters Ryanair and easyJet are stealing customers in its former stronghold, regional and domestic flights. Alitalia is struggling to expand its share of high-fare business passengers flying long-haul routes between big cities. Under Cassano, a shipping and luxury goods veteran, the strategy stayed grounded on the tarmac.

Despite its travails, Alitalia is benefiting from a godsend in papal publicity. The day after the shakeup at the top, Pope Francis boarded an Alitalia Airbus A330-200 for Havana at Rome’s Flumicino Airport. Since then, the Pope’s aircraft, festooned with the Papal shield to the side of the passenger door where the Pope emerges, loomed large in videos and photos as the Pope greeted Cuban President Raúl Castro and bestowed blessings on children on his much-awaited arrival in Havana.

In fact, the Vatican doesn’t have its own private aircraft. It charters the widebody jet from Alitalia for the Pope’s intercontinental flights. The aircraft, christened the Raffaello Sanzio after the great late Renaissance painter who immortalized late Renaissance Popes, doesn’t have an office, a conference room, or any of the special features found on Air Force One. It’s the same as the planes used for normal commercial passengers, featuring 20 seats in the first class cabin, and 263 in coach. The Pope has a first class row to himself, while the heads of his secretariats occupy seats behind him.

The coach area is packed with journalists from leading newspapers, magazines and TV networks around the globe, from CNN, to the AP, to Time, to Univision, the Italian daily La Stampa, and of course the Vatican weekly L’Osservatore Romano. Alitalia provides the Vatican with a heavily discounted charter rate, and the more than 200 journalists pay their own way. Hence, the expense to the Holy See is minimal.

Big media covets those seats for good reason. As a matter of tradition, the Pope does not grant official interviews. The only time he mixes with journalists is on his trips, and Francis relishes the opportunity. The Pontiff regularly wanders into the coach cabin to dispense blessings, shake hands, and field questions. He even displays a rakish sense of humor. Asked about the secret source of his immense energy on a trip to Latin America in July, the Pope jabbed at the sensationalist media by quipping, “You’d like to say that I take drugs!”

On the flight to Havana, a Univision reporter presented the Pontiff with a box of Argentinian-style empanadas. The Pope graciously shared the dish with everyone on the plane.

On Tuesday, Pope Francis will arrive in the U.S., landing at Joint Base Andrews near Washington, DC, greeted by fanfare likely to dwarf the welcome of any of his predecessors.

Alitalia needs help, and for any brand, what could be a better benediction than providing the vehicle for an historic apostolic journey?

For more about airlines, watch this Fortune video: