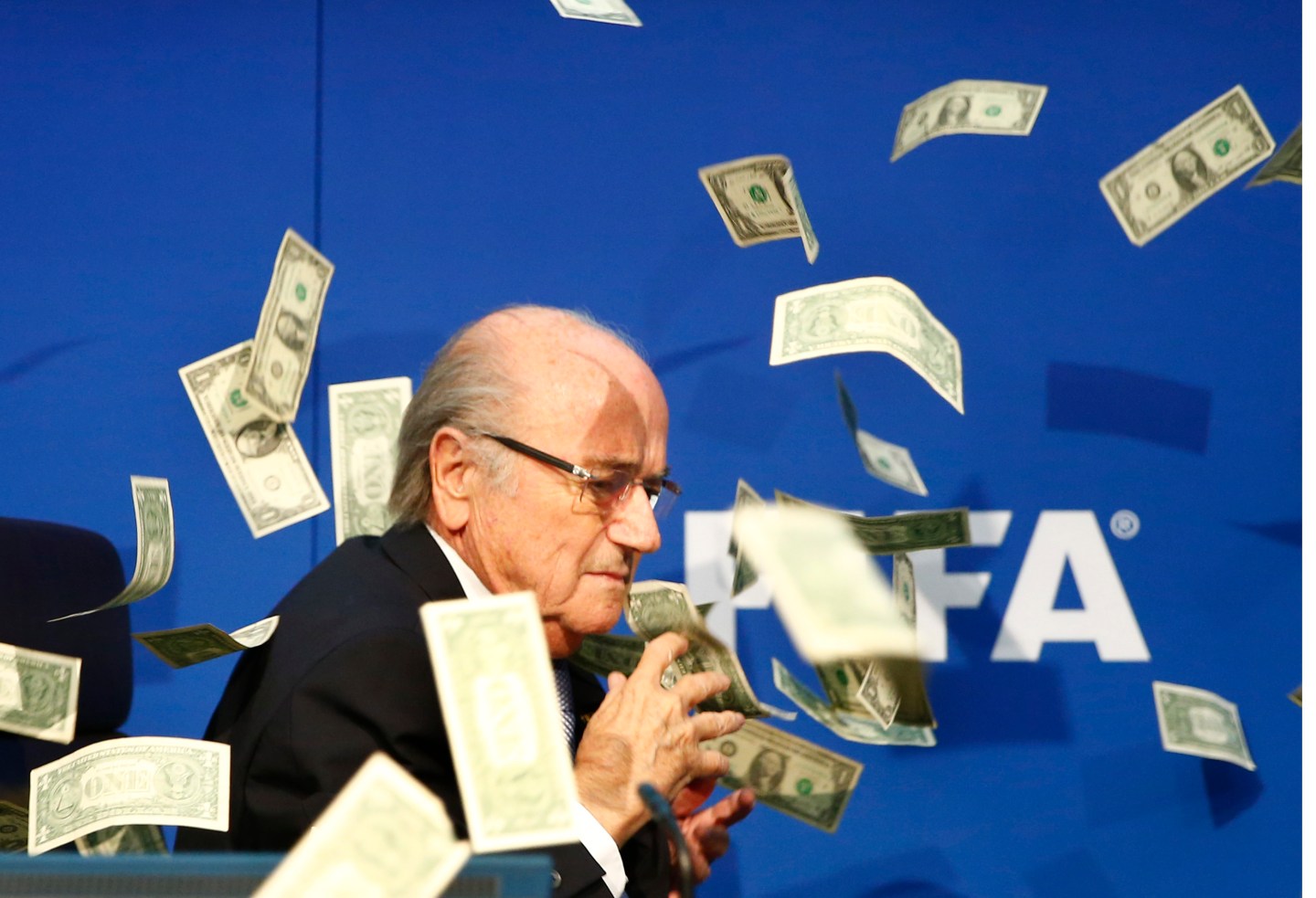 British comedian known as Lee Nelson (unseen) throws banknotes at FIFA President Sepp Blatter as he arrives for a news conference after the Extraordinary FIFA Executive Committee Meeting at the FIFA headquarters in Zurich, Switzerland July 20, 2015. World football's troubled governing body FIFA will vote for a new president, to replace Sepp Blatter, at a special congress to be held on February 26 in Zurich, the organisation said on Monday. REUTERS/Arnd Wiegmann TPX IMAGES OF THE DAY - RTX1L1FT
Photograph by Arnd Wiegmann — Reuters

If Sepp Blatter thought that resigning his longtime perch as president of FIFA in June would allow him to retire quietly, he was very mistaken. On Friday the Attorney General of Switzerland, where the world’s governing soccer body is based, announced it has opened a criminal investigation into Blatter “on suspicion of criminal mismanagement” and “misappropriation.”

Blatter, you’ll recall, stepped down in June just one week after the indictments of nine FIFA officials in May. Blatter was not one of the nine arrested in a posh hotel in Zurich, but has been accused of accepting bribes from countries in exchange for World Cup bids. He has staunchly denied wrongdoing but did say when he resigned that FIFA, “needs a profound restructuring… My mandate does not appear to be supported by everybody.” (For the full background on all of this, see: Everything you need to know about FIFA corruption charges.)

Now the Switzerland Attorney General is investigating two specific contracts allegedly signed by Blatter: one made in 2005 with the Caribbean Football Union and its then-president Jack Warner, and one signed in 2011 with the Union of European Football Associations (UEFA) and its president Michel Platini. The Swiss AG’s office:

The OAG suspects that on 12 September 2005 Mr. Joseph Blatter has signed a contract with the Caribbean Football Union… there is as suspicion that, in the implementation of this agreement, Joseph Blatter also violated his fiduciary duties and acted against the interest of FIFA and/or FIFA Marketing & TV AG.

Additionally, Mr. Joseph Blatter is suspected of a disloyal payment of CHF 2 million to Michel Platini, President of Union of European Football Associations (UEFA), at the expense of FIFA, which was allegedly made for work performed between January 1999 and June 2002 ; this payment was executed in February 2011.

One of the biggest surprises of the probe is the explicit inclusion of Platini, who had not been previously implicated. (Warner, on the other hand, has been investigated for corruption on many occasions.)

The announcement from the Swiss AG concludes that “the presumption of innocence applies” for Blatter. FIFA’s critics and detractors, many of whom have railed of corruption for decades, may not feel that way as they read this news.