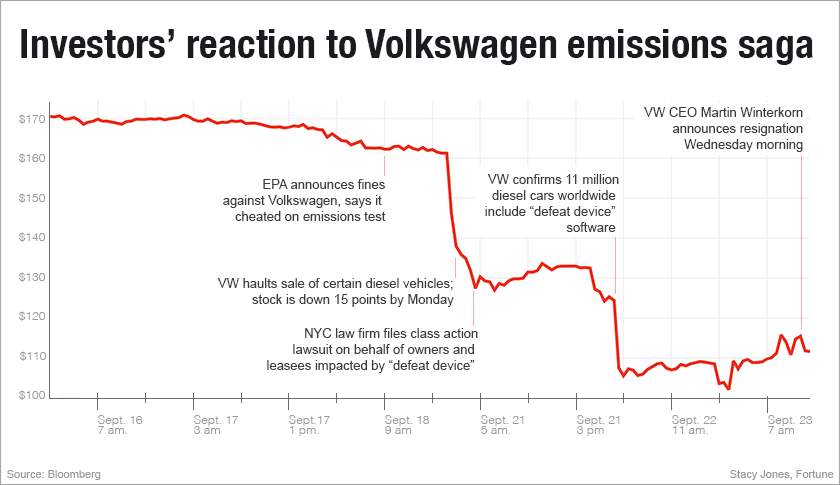 German automaker Volkswagen has seen its stock price tumble about 30% since the Environmental Protection Agency announced last Friday that the automaker manipulated software to hide the emissions its cars produce.

Shares of VW have fallen from around $160 on Friday to around $110 as of Wednesday afternoon.

The emissions scandal is the biggest in VW’s history. The automaker has now admitted it cheated on emissions tests, misinforming U.S. regulators about the measurements of toxic emissions in some of its diesel cars. VW could face lawsuits and $18 billion in penalties, and a damaged reputation could also affect car sales. VW has recalled nearly half a million vehicles as a result of the scandal.

On Wednesday,VW’s CEO Martin Winterkorn announced his resignation, causing the automaker’s stock price to halt its decline: “As CEO I accept responsibility for the irregularities that have been found in diesel engines and have therefore requested the Supervisory Board to agree on terminating my function as CEO of the Volkswagen Group,” he said in a statement. “I am doing this in the interests of the company even though I am not aware of any wrong doing on my part.”

The volatility of the stock is shown in the chart above, including the EPA announcement on Friday, the announcement of a class action lawsuit, news of the CEO resigning, and more.

For more on Volkswagen, watch this Fortune video: