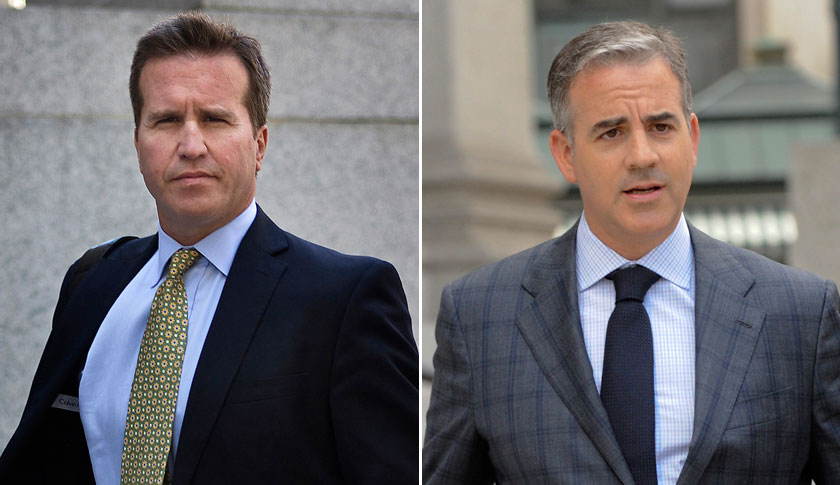 Todd Newman, former portfolio manager for Diamondback Capital Management LLC, exits federal court in New York, U.S., on Thursday, May 2, 2013. Newman was sentenced to 4 1/2 years in prison for his role in an insider-trading scheme that the U.S. said reaped $72 million. Photographer: Victor J. Blue/Bloomberg via Getty Images Anthony Chiasson, co-founder of Level Global Investors LP, left, exits federal court with his attorney Gregory Morvillo following a sentencing hearing in New York, U.S., on Monday, May 13, 2013. Chiasson will be sentenced to 6 1/2 years in prison for using illegal tips funneled to him from analysts and company insiders to make $68 million for his hedge fund, a judge said. Photographer: Louis Lanzano/Bloomberg via Getty Images
Photographs by Getty Images

On Monday the U.S. Supreme Court will consider whether to hear the controversial insider trading cases of former hedge fund portfolio managers Todd Newman and Anthony Chiasson—prosecutions that have cast a pall over the once lauded record of Manhattan U.S. Attorney Preet Bharara in this area.

Though the importance of the cases is hardly in doubt, and the Solicitor General of the United States is asking the Court to hear them—a factor that ordinarily receives deference from the Court—the appeals are beset with a major procedural anomaly that undercuts their chances of acceptance.

But before getting to that, let’s recall the case’s theatrical beginning and its highly disconcerting denouement. In November 2010, F.B.I. agents staged a dramatic morning raid on the offices of three hedge funds: Diamondback Capital Management, Level Global Investors, and Loch Capital. All three firms later closed their doors, as nervous investors pulled their money out.

In January 2012, Newman and Chiasson, of Diamondback and Level Global, respectively, were charged with securities fraud. (No one from Loch Capital was ever arrested.) That December they were convicted and, in May 2013, sentenced to lengthy terms: 54 months for Newman and 78 months for Chiasson. For a while the two appeared to represent just a couple more unremarkable notches on Bharara’s belt; since he took office in August 2009, his office has arrested 100 people for insider trading, of whom 87 have been convicted so far.

But last December the U.S. Court of Appeals for the Second Circuit not only overturned Newman’s and Chiasson’s convictions, but dismissed their indictments—barring Bharara from retrying them, unless the Supreme Court intervenes. Prosecutors had not only convinced the trial judge to use the wrong jury instructions, the appeals court held, but had also—and this was the fatal part—failed to come forward with evidence that could have convicted the two men even had the proper instructions been given.

In the argot of insider trading jurisprudence, Newman and Chiasson were “remote tippees.” That’s because, under the prosecution’s theory, corporate insiders (the tippers) at Dell and Nvidia had each leaked material nonpublic information to an intermediary (the original tippee), who then relayed that information to at least one other intermediary before the information was finally relayed to Newman and Chiasson, who traded on it.

Their cases raised two key—though, to lay persons, weirdly beside-the-point—questions. (They seem beside the point in part because there is no specific statute forbidding insider trading; instead, judges have, through case law, stretched a general fraud statute to cover some of the conduct we consider insider trading, while disagreeing about ultimate goals and how far they are willing to contort the conventional concept of fraud. For more detail, see “The Gray Art of Not Quite Insider Trading.”)

The first question was whether the original tipper had received a “personal benefit” in exchange for the original leak. That’s important because a Supreme Court precedent in 1983 established that, to commit a crime, a tipper of material nonpublic information has to receive some kind of personal benefit in exchange for his leak. (Basically, the Court felt that there are some types of non-corruptly motivated leaks of confidential information that can actually benefit the market, and it wanted to prevent such leaks from being treated as crimes.) The tippee’s liability derives from the tipper’s, so if the tipper didn’t commit a crime, neither did the tippee, or any remote tippee.

The second key question was whether, to convict a remote tippee like Newman or Chiasson, the government needed to prove that Newman and Chiasson knew that the original tipper had received a personal benefit (assuming, of course, that the tipper did receive one).

The questions are important and recurring because hedge fund managers have become some of the biggest fish in the Wall Street biome, and the fear is that if they are trading on inside information, it will often be on the basis of tips received from tippers they never personally deal with. No one wants to hand corrupt hedge fund managers an easy way to profit with impunity from insider trading. (Since the Second Circuit’s ruling in Newman, U.S. Attorney Bharara has had to drop insider trading charges that he had previously brought against five other defendants.)

As the government sees things, the Second Circuit’s ruling in December mistakenly beefed up the nature of the “personal benefit” that the original tipper must receive in order to commit a crime. In the past, writes Solicitor General Donald Verrilli, Jr., in the certiorari petition of the U.S. Department of Justice, the tipper’s personal benefit could take the form of either an obvious quid-pro-quo (like a payment of money) or the less obvious, more warm and fuzzy reward inherent in giving a “gift” to “a trading relative or friend.” The Second Circuit decision, in Verrilli’s view, effectively construed the second type of benefit out of existence, by limiting it to situations where “there is a meaningfully close personal relationship that generates an exchange that is objective, consequential, and represents at least a potential gain of a pecuniary or similarly valuable nature.”

Newman and Chiasson contend, of course, that the Second Circuit ruling worked no change at all, and merely restored the law to what Supreme Court precedent had long contemplated it should be. (Newman is represented by Stephen Fishbein of Shearman & Sterling, while Chiasson’s lead appellate counsel is Mark Pomerantz of Paul, Weiss, Rifkind, Wharton & Garrison.)

But the striking omission in Verrilli’s certiorari petition is its failure to directly take issue with the other portion of the Second Circuit’s ruling, in which that court found that the government presented “no evidence” that Newman and Chiasson knew the tipper had received a personal benefit. For that reason, even if the Supreme Court were to take the case and agree with Verrilli that the Second Circuit’s definition of personal benefit was wrong, it seems that Newman and Chiasson would still walk, for lack of evidence that they knew that their tippees at Dell and Nvidia received any personal benefit.

That’s a problem because, under the Constitution, federal courts aren’t supposed to render “advisory opinions”—i.e., decisions that have no concrete impact on a party’s life or property—even if such an opinion might give helpful guidance in future cases.

Verrilli contends in his submissions that if the Supreme Court decides that the Second Circuit got the definition of personal benefit wrong, it could then send the case back to the Second Circuit to search the record anew, and decide whether it still considered the government’s evidence insufficient to prove that Newman and Chiasson could have inferred that the tipper received a personal benefit, as now properly defined.