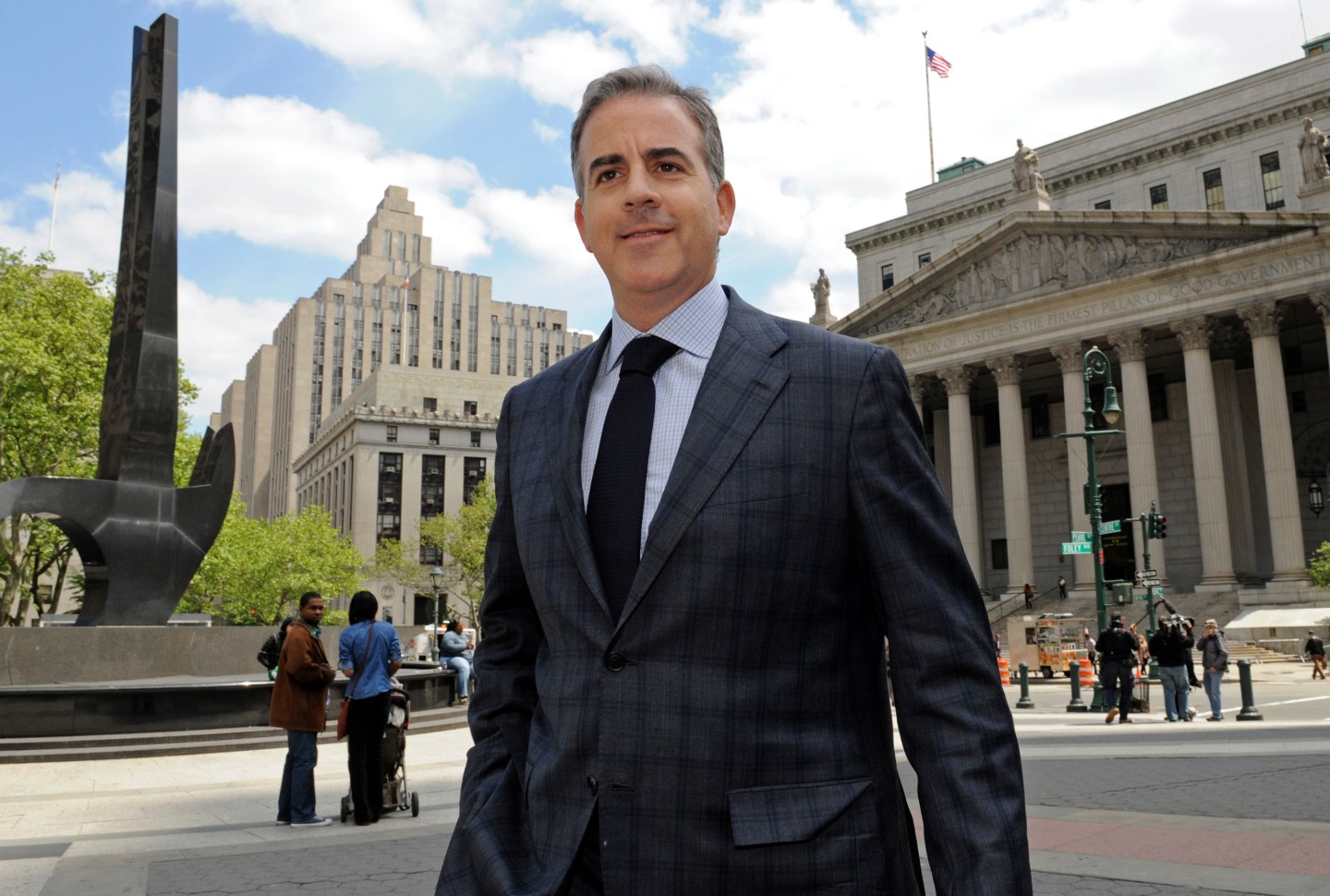 Anthony Chiasson, co-founder of Level Global Investors LP, exits federal court following a sentencing hearing in New York, U.S., on Monday, May 13, 2013. Chiasson was sentenced to 6 1/2 years in prison for using illegal tips funneled to him from analysts and company insiders to make $68 million for his hedge fund. Photographer: Peter Foley/Bloomberg via Getty Images
Photograph by Peter Foley — Bloomberg via Getty Images/file

A federal appeals court yesterday unanimously overturned the insider trading convictions of two investment fund portfolio managers, Todd Newman of Diamondback Capital and Anthony Chiasson of Level Global Investors, in a ruling that will make it quite challenging to win a certain subset of such prosecutions in the future.

Newman and Chiasson had each been found guilty of using material nonpublic information leaked to them by corporate insiders they had never met, but which had been passed along through three or four levels of intermediaries. The ruling appears, as a practical matter, to make it very difficult for such “remote tippees” to be successfully prosecuted in the future, at least in criminal actions.

The ruling, if it stands, will also likely doom the conviction of at least one other remote tippee caught up in Manhattan U.S. Attorney Preet Bharara’s insider trading prosecution dragnet: Michael Steinberg, a former portfolio manager for SAC Capital. One other remote tippee prosecuted by Bharara, Rengan Rajaratnam, was acquitted after trial in July. (Yesterday’s ruling will not affect, however, the celebrated convictions of Rengan’s brother, Galleon hedge fund owner Raj Rajaratnam, or that of SAC Capital portfolio manager Matthew Martoma.)

In a statement, Bharara said that yesterday’s ruling “interprets the securities laws in a way that will limit the ability to prosecute people who trade on leaked inside information,” but said it would affect “only a subset” of those previously convicted by him. He said he was still assessing the ruling and was considering appealing. (Since assuming the office in August 2009, Bharara has charged 95 people with insider trading and, prior to yesterday’s decision, he had won 89 convictions while suffering one acquittal.)

The opinion, authored by circuit judge Barrington D. Parker, is an illustration of a fact about the insider trading laws that sometimes surprises the lay public. Though we often think of those laws as forbidding any trading on material inside information—and many Securities and Exchange Commission staffers and U.S. attorneys think they the laws ought to do that—the U.S. Supreme Court has repeatedly said that they do not sweep so broadly.

Certain kinds of information advantage are actually legal, and that’s why the lines get murky. I wrote a cover feature about this for the September 2, 2013 issue of Fortune, “The Gray Art of Not Quite Insider Trading.”

The starting point for trying to understand the anomalies of this area of the law is that there is no actual statute specifically addressed at “insider trading.” Instead, courts have interpreted the general law against “securities fraud” to prohibit some forms of insider trading.

The most clear-cut case is that of a corporate insider—a CFO, say—who uses confidential information about his corporation to trade for his own profit. Judges have said that this amounts to “fraud” because the officer is breaching his fiduciary duty to the company’s shareholders and using the information to gain a personal trading advantage over them.

If the insider leaks material nonpublic information to someone outside the corporation—a tippee—then the tippee, if he trades on the information, can also be liable for insider trading, even though the tippee doesn’t technically have any fiduciary duty to the corporation’s shareholders. The tippee’s liability is said to derive from the tipper’s.

But in a landmark 1983 decision, known as Dirks v. S.E.C., the Supreme Court drew an important limitation on tippee liability. Dirks involved odd facts: the former director of an insurance company leaked information about fraud at his company to a stockbroker in hopes of exposing the wrongdoing. Since Dirks received no “personal benefit” from the broker in exchange for the leak, the court held that neither he nor the broker, nor the broker’s downstream clients, were liable for insider trading.

Ever since Dirks, the tippee of inside information has been considered immune from insider trading liability so long as the tipper did not receive a “personal benefit” in exchange for leaking the information.

In many cases that sort of quid-pro-quo isn’t hard to prove. Usually the leaker expects or demands payment in exchange for taking the risk of breaking his company’s rules to provide inside information, and if the government goes after the tippee himself, it has no trouble making its case.

But in the prosecutions of Chiasson and Newman, the situation was different. The government alleged that insiders at Nvidia and Dell were leaking information to a group of unprincipled analysts, who were then sharing information with each other. The analysts, in turn, forwarded some of the tips they received to portfolio managers within their own firms. Newman and Chiasson were such portfolio managers.

Both failures of proof were fatal to the prosecutions, according to Judge Parker. (And it’s hard to imagine many remote tipper prosecutions in which those gaps in proof could be filled beyond a reasonable doubt.)

Though this ruling may seem intuitively wrong to many, it stems from the Supreme Court’s desire, as expressed in Dirks, to encourage stock analysts to continue to dig hard to learn as much information as they can about the stocks they cover. Such research ensures that stocks are valued accurately and that, in turn, promotes market efficiency. The fact that these analysts gain informational advantages over others in the process of unearthing such information is not, then, necessarily illegal. Sometimes, in fact, it benefits society.