Why this pharma CEO bought his arch-rival’s stock 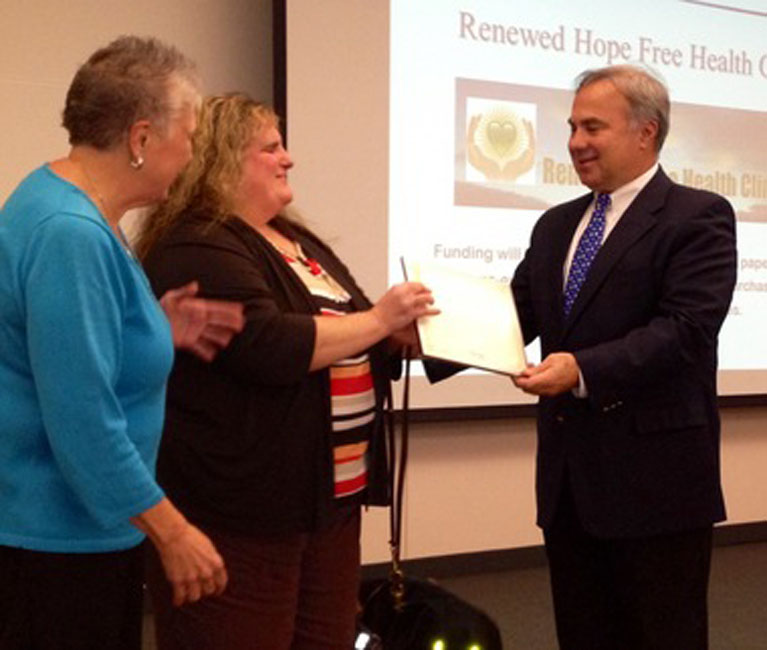 Image #: 25569259 Perrigo Chairman, President and CEO Joseph C. Papa, right, presents a certificate to commemorate the Perrigo Foundation's gift of $25,000 to Renewed Hope Free Health Clinic. Receiving the gift is Carol Visser, left, president of Renewed Hope's board of directors, and Marcia Beare, center, executive director Renewed Hope. Beare said the money will help her organization cover its rent for the next year; provide devices that help diabetics but cost each person about $45 per week; and provide some items to help equip examination rooms at the health clinic. Al Jones | MLive/Gazette MLIVE.COM /Landov
Photograph by Al Jones — MLIVE.COM/Landov

Perrigo CEO Joe Papa slammed generic drugmaker Mylan on Thursday as he implored his shareholders to reject Mylan’s hostile takeover offer, calling it “insulting” and “value-destructive.” Papa particularly excoriated Mylan’s stock, which he said had “limited upside” and would provide “little financial benefit for shareholders down the road.”

But here’s the rub: Just a couple of hours earlier, Papa had disclosed in an SEC filing that he personally owns a significant amount of Mylan shares—indicating that not too long ago, he actually thought Mylan’s stock looked pretty good. (See Fortune’s profile of Mylan and its CEO Heather Bresch from the Sept. 15 issue of the magazine.)

The value of Mylan’s stock is a central issue in the takeover battle, because Mylan’s shares make up about two-thirds of its $27 billion tender offer for Ireland-based pharma firm Perrigo (PRGO), which commenced on Monday. Papa warned Perrigo investors that exchanging their shares for those in Mylan (MYL) would yield bleak returns: “In the long term, shareholders will lose out even more value…the stock will always trade with…a governance discount,” he said on a conference call.

Papa currently owns 4,965 shares of Mylan (a stake valued at more than $245,000)—three-quarters of which he purchased on March 12. That was just a few weeks before Mylan proposed to acquire Perrigo, a maker of drugstore-brand over-the-counter medicines, in April.

An active investor with most of his personal portfolio allocated to various health care companies, Papa apparently invested in Mylan before he knew of its impending takeover bid. Once Mylan announced its intentions, Papa felt that it would be unethical to trade or sell his suitor’s stock while fending off the deal, according to a Perrigo spokesperson.

“It is safe to say if he knew then what he knows now about the scope of Mylan’s unfriendly governance tactics,” the spokesperson said, “he wouldn’t be an investor. Unfortunately, now he is stuck with the position.”

Mylan, for its part, had a chipper response to the revelation that one of its harshest critics is actually one of its shareholders—and one who was bullish just six months ago. “We are pleased that Mr. Papa personally saw the upside investment opportunity in Mylan stock when we were trading in the high-$50s,” a Mylan spokesperson said, “Which of course makes his comments now about the company all the more confusing.”

The value of Papa’s Mylan holdings is down about 20% since his latest purchase in March. Meantime, he owns 119,415 shares, or $21.6 million worth, of Perrigo.

For more pharmaceutical-industry news, see this video from Fortune: