This governor is worth keeping tabs on 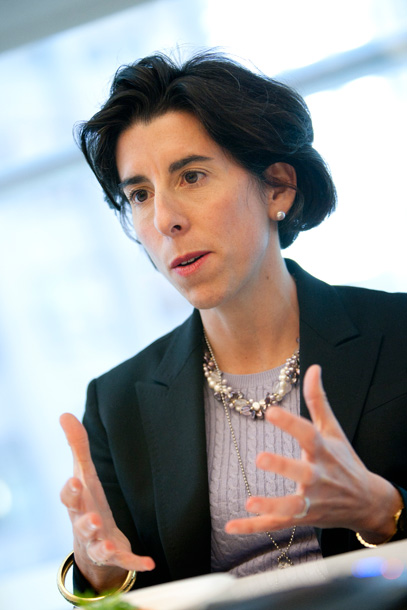 Rhode Island Gov. Gina Raimondo is touring the back room of a silk-screening shop in East Providence, talking up how her new budget helps small businesses. The air is humid and sweet like a laundromat’s, but the blazer-clad Raimondo doesn’t seem to mind. She smiles as she spots a run of black T-shirts hurtling down the folding rack, each one with bright pink lettering that says, DESIGNED TO BE BRAVE. It’s a coincidence, the shop’s owner says, but with Raimondo’s history, no one would be surprised if it weren’t.

Last November the 44-year-old became the first Democratic governor in Rhode Island in more than two decades, but she won after angering some party allies. In Raimondo’s previous role as state treasurer, her pension overhaul slashed cost-of-living increases for public employees, increased their retirement age, and moved them from a defined-benefit plan into a hybrid system that included defined contribution. Unions were livid, and the resulting contest drew national attention (both admiring and furious) to the state, as well as to the little-known former venture capital exec who pushed the reforms into existence.

For Raimondo, who attended Harvard, Yale, and Oxford (as a Rhodes Scholar), the politics of reform were subservient to the math. She originally ran for treasurer after hearing that budget cuts were threatening local libraries, and became convinced that the state pension system—then funded at just 48%, second-worst in the nation—was patient zero in Rhode Island’s economic malaise. She barnstormed the state, telling a story of actuarial tables and the failure of both politicians and unions. At the same time, she increased the pension funds’ exposure to hedge funds and other high-fee investments, leading some to accuse her of selling out cops and teachers.

When her reforms passed, unions sued. Voters, however, felt differently, sending Raimondo to the governor’s office shortly after. In June the state settled the bulk of the lawsuits—keeping most of her core reforms in place after more than a year of mediations.

“There is so much hand-wringing and talking in politics,” Raimondo said, during a conversation in her State House office. “My approach is to define the problem and, if we can all agree on that, then I’m willing to compromise a ton on ways to fix it.”

It’s working: Her recent budget passed unanimously in the state’s House. Designed to address unemployment and growth, it eliminated a sales tax on commercial energy use, added a tax to Airbnb-type vacation rentals, lowered the minimum corporate tax rate, and increased K–12 spending (including funding for school construction and an all-day-kindergarten mandate).

Besides being held up as a model for other cash-strapped governments, the state’s recent successes have fueled speculation about Raimondo’s future. Asked about it, she demurs—mostly. “I can’t imagine myself doing anything in the legislative branch.” But? “I really like putting a team together and getting things done in the executive branch.” Just one more reason Rhode Island is worth watching.

A version of this article appears in the September 15, 2015 issue of Fortune magazine with the headline “Tiny state, big fighter.”