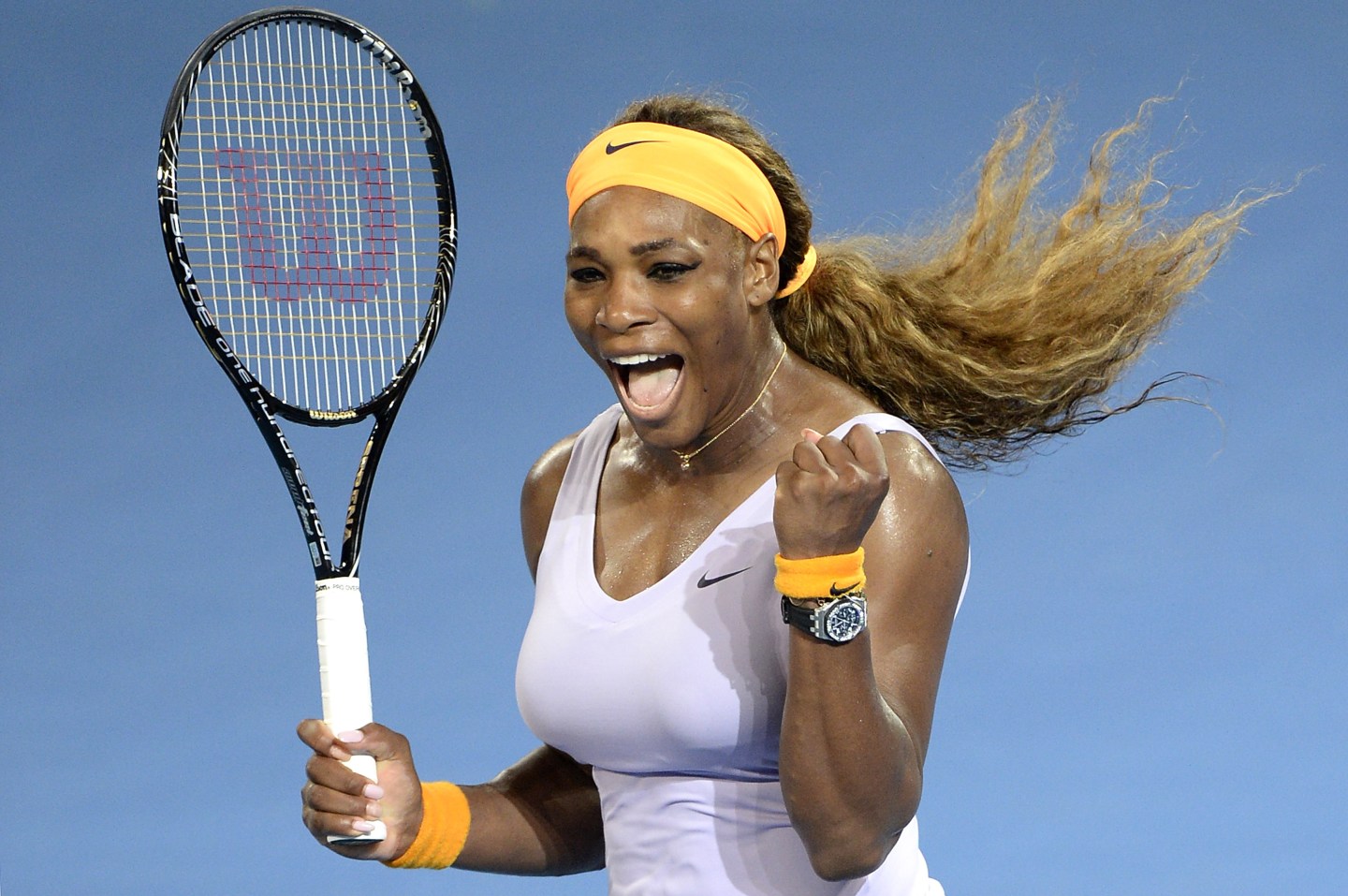 BRISBANE, AUSTRALIA - JANUARY 04: Serena Williams of the USA celebrates victory after winning her finals match against Victoria Azarenka of Belarus during day seven of the 2014 Brisbane International at Queensland Tennis Centre on January 4, 2014 in Brisbane, Australia. (Photo by Bradley Kanaris/Getty Images)
Photograph by Bradley Kanaris—Getty Images

When Yahoo CEO Marissa Mayer announced plans to work through her current pregnancy—with twins, no less!—some women saw it as confirmation that non-stop “leaning in” is the only the only viable path to high-level success.

Williams has been dominating headlines during this year’s US Open and stoking excitement as she makes a run at a calendar-year Grand Slam (winning all four major tournaments in a single year)—a feat that has only been accomplished by five other singles players. Indeed, some have made the case that she is the best tennis player of all time.

Yet, while it may feel like Williams has been a consistent force in tennis, she has actually taken several breaks from the sport—most forced by an injury or illness.

One of her most dramatic absences began in July 2010, after she stepped on glass and injured a tendon in her right foot. She reinjured her foot in October of that year, requiring a second operation, and then had a life-threatening pulmonary embolism in February 2011. A few weeks later, she developed a hematoma in her stomach.

There were other less lengthy absences, include dropping out of the Brisbane National in 2012 due to an ankle injury (she was out about a month), and leaving Wimbledon in 2014 due to a viral illness.

While Williams probably would have preferred to do without such breaks, Andrew Marcus, CEO of MyTennisLessons, the world’s largest online marketplace for tennis instruction, says that having some time away from the pressures of high level competition can be helpful for athletes—particularly in a sport as mentally taxing as tennis.

“The sport at its highest level is very taxing on an athlete’s mental and emotional endurance. Not only the pressures of competing on the biggest stages, but the daily grind required to maintain yourself physically can be a serious mental and emotional strain,” he said. Stepping away from those stresses can have a revitalizing effect, says Marcus.

Professionals who take time away from the traditional work-world may also experience a boost. That’s good news for large percentage of women who are likely to step away from full-time work at some point in their career—often when they have kids. Indeed, one study found that 28% of Gen X and 44% of Baby Boomer women report having taken a career break of more than six months to care for children.

Executive coach Peggy Klaus says that executives who take a break—voluntarily or not—often gain a focus and perspective on their careers that’s difficult to attain when we’re caught up in the day-to-day. “Some of those who are most successful when they reenter the workforce are those who take a month—or three months, six months—to just breathe and do the psychological and emotional work they need in order to see what type of career works best for them,” she says.

Of course, sometimes finding the perfect post-break job requires a bit of trial and error. Carol Fishman Cohen is a good example. Cohen’s career hit a bump when her employer, investment bank Drexel Burnham Lambert, collapsed while she was on maternity leave. Rather than try to hop back into another full-time job, Cohen ended up spending more than a decade out of the traditional workforce (she did take on project work for some of that period). She then accepted a job Bain Capital—only to discover that her goals and interests had changed.

Cohen ended up leaving Bain to build a new career informed by her return to the working world. She is now CEO and co-founder of iRelaunch, a career reentry resource for returning professionals. As someone who lived that experience, she is in a position to pass on what she learned.

“People returning to business roles may have some early transitional issues,” Cohen says. “But then they come back strong and everyone forgets they were ever away in the first place. A high performer is a high performer, career break or no career break.”

For those who want to take the time off—then jump right back in where they left off—some industries offer programs designed to help talented workers do just that.

Jenifer Kelley’s time out of the workforce also came on the heels of her maternity leave. Her company ended up dissolving her team while she was on leave and Kelley chose not to accept the alternate position the firm offered her. When, after taking some time off to care for her children, she decided to return to the world of finance, she turned to a work reentry program. Through Credit Suisse’s Real Returns work reentry program, Kelley says she was able to step back into the industry at a high level: a VP in private banking.

“I had achieved a lot in my career and to step off the train to care for my children was a decision that seemed easy at the time, but…I did worry it would be difficult if not impossible to get back on the same career trajectory,” she said. The Credit Suisse program “allowed me to draw upon the expertise I had developed in my career. I was able to prove that I could still add value,” she says.

Some professionals even return to their original company after a break. Take Amanda Lannert, who was president of gaming company Jellyvision Labs when the first dot-com bubble burst. By August of 2001, the company was struggling and Lannert made the decision to lay herself off. But that didn’t last long: A year later, she was offered a chance to rejoin the company—and took it. Jellyvision has since flourished and she became CEO in 2011.

Lannert sees a couple of lessons in her unexpected time off. First, she says no one should be afraid to fail—even that means putting a temporary kink in your career track: “If you never fail, you never improve,” she says.

Her second takeaway will likely ring true to many who’ve taken a break of one type or another. Resilience in the face of the unexpected is key, she says: “The path to success is never, ever linear.”