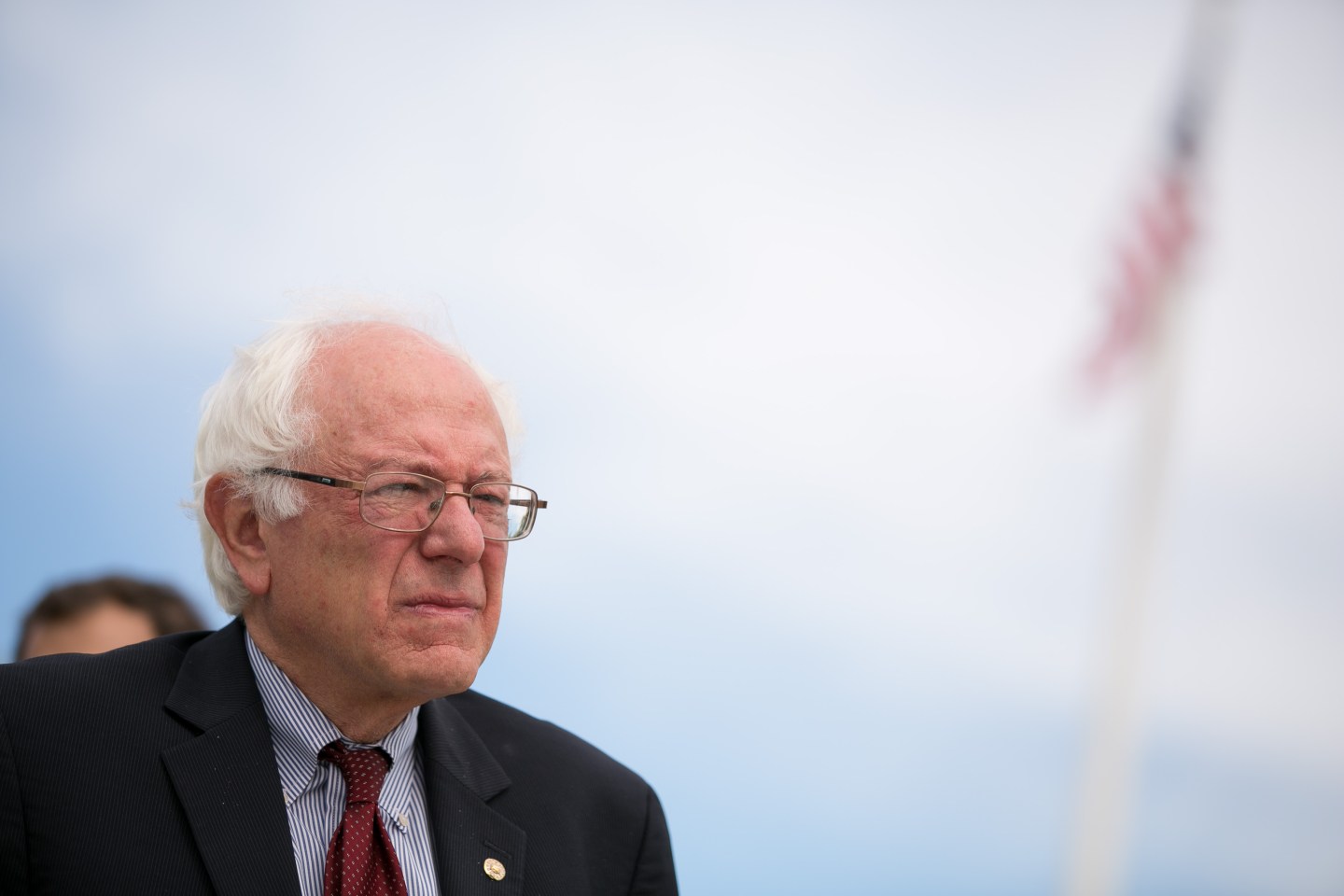 WASHINGTON, DC - OCTOBER 8: Sen. Bernie Sanders (I-VT) is seen outside the Supreme Court in Washington, on October 8, 2013 in Washington, DC. On Tuesday, the Supreme Court will hear oral arguments in McCutcheon v. Federal Election Committee, a first amendment case that will determine how much money an individual can contribute directly to political campaigns. (Photo by Drew Angerer/Getty Images)
Photograph by Drew Angerer — Getty Images

A drab office squeezed between a pawn shop and a dance studio in small-town New Hampshire seems an unlikely place to begin a political revolution, but for Bernie Sanders, a strip mall that had seen better days worked just fine.

“Welcome, all, to the political revolution,” Sanders said to a crowd of more than 100 people baking in the summer sun near Concord on Monday. “You all know New Hampshire plays a unique role in the American political process. We’re going to do well in Iowa, and if we do well here in New Hampshire—between you and me—they ain’t gonna stop us.”

It was the grand opening of the Bernie Sanders campaign office in Concord, the capital of a state that could decide the fate of Sanders’ presidential campaign. As part of the campaign’s rapid expansion in New Hampshire, Sanders had come here to say his movement’s goals—such as universal healthcare, a $15 minimum wage and paid sick leave—were attainable.

“I’m not advocating for pie in the sky,” Sanders said.

There was cake, however. The next day was the upstart Democratic candidate’s birthday, and the crowd surprised him with a birthday cake and a round of “Happy Birthday to You.” “I’m cutting the first slice here,” Sanders said to cheers.

Sanders’ campaign is growing at a breakneck pace in New Hampshire as his new staff struggles to catch up to his popularity in the state. Drawn by Sanders’ message of economic fairness and calls for campaign finance reform, support has swollen for the Vermont senator in the last two months.

In early August, Sanders had just four paid staff members in New Hampshire; the campaign now has 37. The campaign has five offices as of Monday, but by the end of the week, there will be eight offices where volunteers can come phone bank, learn canvassing tips and get organized.

Recent polls show the Vermont senator with a sizable lead in the state over Hillary Clinton, who is still the presumptive frontrunner for the Democratic nomination. An NBC/Marist poll published Sunday showed Sanders with a nine-point edge over Clinton, mustering support of 41% of Democratic voters in New Hampshire compared with 32% for Clinton.

The second contest of the Democratic primary, New Hampshire will be a crucial proving ground for the Vermont senator. If he performs well in the state, he’ll have enough momentum to continue his campaign. But if Sanders loses so close to his home state, it could lead to a premature end.

New Hampshire, however, has long been an undependable ally to contrarian presidential contenders, boosting Democratic upstarts like Sanders early only to ultimately choose establishment candidates. In 1999, then-Sen. Bill Bradley, edged out Al Gore in early polls but eventually lost the state. Former Vermont Gov. Howard Dean polled consistently ahead in 2003, but lost by a wide margin to John Kerry.

Much of Sanders’ support in the New Hampshire is a byproduct of his long career in nearby Vermont, where he began as mayor of the city of Burlington. Politics in New England seep through porous borders, and Sanders was well-known in New Hampshire long before he began his campaign.

Sanders has also campaigned hard in New Hampshire, visiting the state for multi-day swings at least three times since the beginning of August. On Monday, he completed a whirlwind tour at the southern end of the state, beginning at an AFL-CIO labor breakfast in Manchester before heading to a parade in Milford forty minutes south. There, Sanders led hundreds of supporters, outnumbering Hillary Clinton’s cohort by several times, with his crowd chanting “Hey hey, ho ho, corporate greed has got to go.”

From there Sanders visited the a Labor Day barbecue in Amherst before heading back north to Concord to open up the campaign office and cut his cake.

Throughout the day, Sanders repeated variations of his stump speech, calling for a $15 minimum wage, a single-payer healthcare system, paid family leave and sick leave for all American workers, higher taxes on the wealthy and aggressive action on climate change.

The campaign Sanders is building on the ground in New Hampshire is playing catchup with the spontaneous organizing supporters are already doing. Staff who have come on in New Hampshire say that the energy for Sanders is already there, the question is how to harness it.

“The biggest challenge is putting infrastructure together fast enough to support what these people are doing,” said Julia Barnes, state director for Sanders in New Hampshire. “We’re still growing rapidly because we need the infrastructure to process and utilize the volunteers.”

Many volunteers complain they’ve done organizing on their own, including knocking door-to-door, calling around their neighborhoods and handing out flyers. The paid staff of the Sanders campaign now has to harness the energy and turn it into votes.

Much of the organizing for Sanders begins online. Reddit forums, Facebook groups and avid tweeters have directed dollars and web traffic to Sanders.

The campaign infrastructure is being fueled by donations from over 250,000 individual donors, as of the end of the last quarter in late June. The campaign is turning the unexpected influx of money into a hardy organizing infrastructure in the early states and looking for ways to expand its physical footprint beyond Iowa, New Hampshire and South Carolina.

Many key voices in the state have swung to Sanders, with supporters in the audience including the chair of the Sierra Club in New Hampshire sat in the audience, along with current and former state representatives and union officials.

Clinton’s campaign has 36 field organizers in New Hampshire and is paying them with larger donations from a fuller war chest.

Even if he is still a clear underdog to win the Democratic nomination, the summer seems to have paid off for Sanders in New Hampshire. At the beginning of June, polling averages had Sanders at around 15% compared with 50% for Clinton. He now consistently leads her by at least six or seven percentage points.

Many Sanders supporters in New Hampshire are newcomers to politics. Johanna Houman, a grandmother of seven, has never volunteered for a politician before but spends much of her days maintaining a Facebook group for Sanders and handing out flyers.

Alayna Josz, a manicurist in a nail salon, paints Bernie themes for free on customers’ nails and volunteers when she’s not at work. “He has started a conversation with all of us that we are not going to be quiet about,” Josz says.