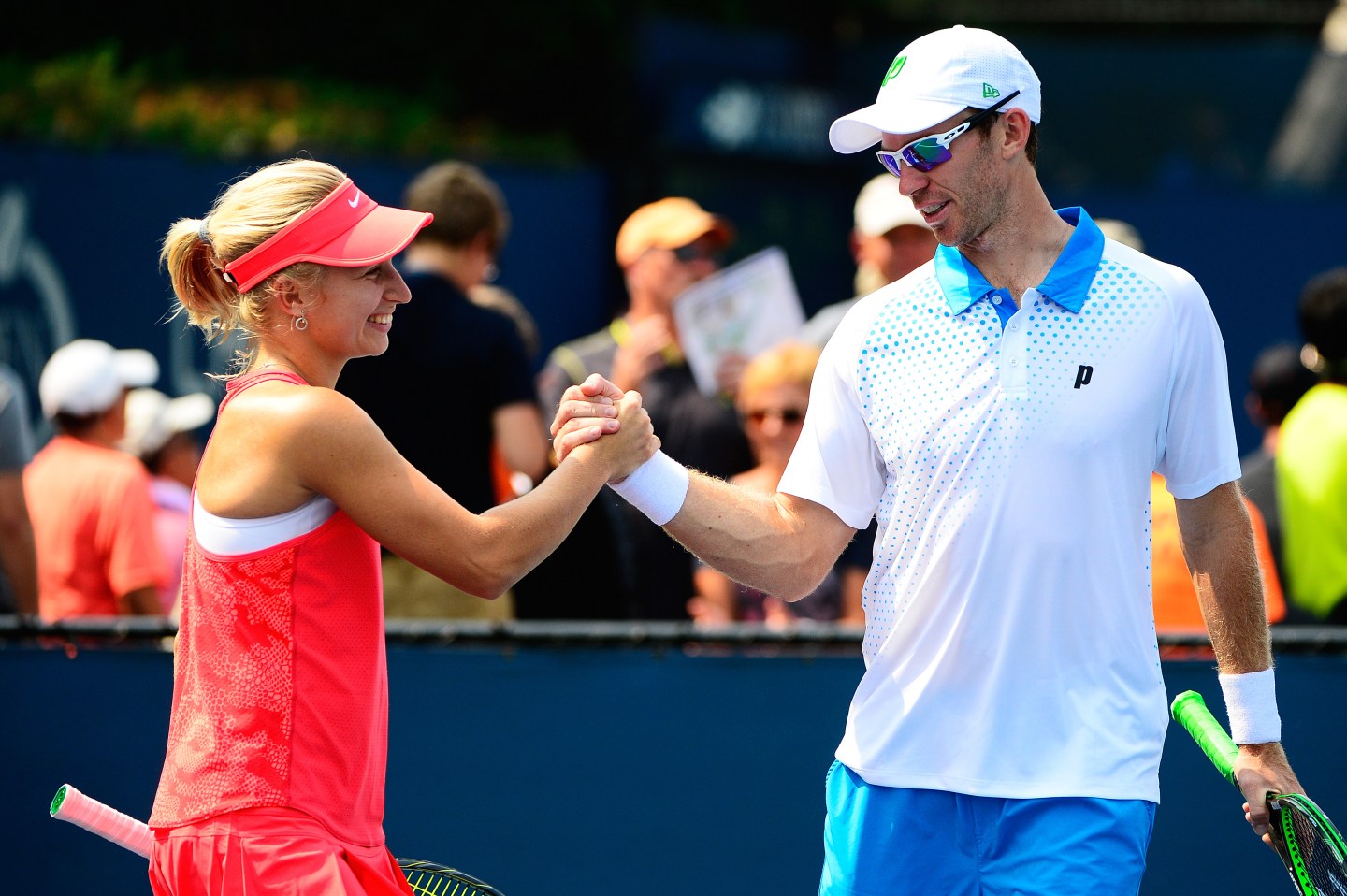 NEW YORK, NY - SEPTEMBER 03: Daria Gavrilova and John Peers of Australia reacts during their Mixed Doubles First Round match against Alexandra Dulgheru and Florin Mergea of Romaniaon Day Four of the 2015 US Open at the USTA Billie Jean King National Tennis Center on September 3, 2015 in the Flushing neighborhood of the Queens borough of New York City. (Photo by Alex Goodlett/Getty Images)
Alex Goodlett Getty Images

This week, a quiet, often-overlooked symbol of gender equality commenced: the start of the mixed doubles competition at the U.S. Open.

The event is one of the few coed professional sporting events: two doubles teams, each composed of one man and one woman, face off for a Grand Slam title. The prize money is lower than in singles (the men’s and women’s singles winners take home $3.3 million compared with a relatively modest $150,000 for the winning mixed doubles team), as are the ratings and glamour factor. But the competition still fierce—after all, a Grand Slam title is at stake and play involves some of the most intense athletes in the game.

As a coed sport played at the highest level, mixed doubles is still something of a unicorn in the world of athletics. So why, decades after Title IX was signed into law in 1972, providing far more opportunities for female athletes, are there still only a handful of professional sports where men and women play together?

It’s logical that tennis would be the leader in pitting men and women against one another. Billie Jean King famously fought against Bobby Riggs in the 1973 “Battle of the Sexes.” That year, the U.S. Open also became the first Grand Slam tournament to offer equal prize money to men and women—still a relatively unusual set-up. FIFA, the embattled soccer organization, for instance, still provides the men’s World Cup with a payout that’s nearly 40 times that of the women’s.

Outside of tennis, coed sporting opportunities remain minimal. In Olympic figure skating there’s the pairs competition, and ice dancing, which combines men and women in a single team. At the Summer Games, the team events in the equestrian competition also group men and women together. For some time, Olympic badminton had a mixed doubles event and at the 2014 Winter Games in Sochi, a mixed luge relay, a biathlon mixed relay and a mixed team event in figure skating were added as medal events.

“I don’t know why it has been so uncommon in the past,” says Olympic historian Bill Mallon. “But the barriers are coming down.”

Mallon pointed to the recent FINA World Aquatics Championships, which included mixed synchronized swimming. At the Youth Olympic Games mixed relays are being added, he says. Oddly, in some ways the new events are a throwback; in the old days of bobsledding before World War II, not only could men and women compete together, but at some championships, it was a requirement to have at least one female on the four-“man” sled, says Mallon.

Ironically, Title IX may be to blame for the still-small number of coed events, says Erin Buzuvis, director of the Center for Gender & Sexuality Studies at Western New England School of Law, because it permits a “separate but equal” framework for sports.

“While I think this policy choice was made for good, pragmatic reasons,” Buzuvis says of Title IX. “It ended up normalizing sex-segregated sports as a sort of default that people don’t think too hard about challenging.” Title IX, she adds, does not prohibit schools or sports organizations from adding coed events, nor does it apply to professional sports, yet it “influences how we think about sports in other contexts,” she says.

This division isn’t unique to sports, says Buzuvis. Another component is our strong cultural bias in favor of sex-segregated everything, she says: “We have a ‘best actor’ and a ‘best actress’ category at the Oscars. We have separate billiards and poker tournaments for women. We devour books about men and women being from different planets. The increase in schools that are offering single sex classes is alarming.”

That division in school and school sports teams may carry over into fans’ preferences as adults, says Andrew C. Billings, a professor at the University of Alabama who has researched gender and sports. “There’s also the notion that whatever sport people grew up being a fan of is what will stick with them for life,” says Billings. “Thus, the lack of coed sports to watch feeds a paucity of coed sports in subsequent decades.”

Meanwhile, back at the U.S. Open, many athletes are calling for more mixed doubles. Taylor Townsend, 19, who with fellow American Donald Young, 26, won her mixed doubles face-off against Jennifer Brady and Mitchell Krueger Thursday night, 6-2, 6-1, said she continues to be a fan of the event. It allows a younger player like her to get experience playing in a Grand Slam tournament and informs her singles game.

The mixed event, she said, gives her a rare chance to compete with Young, who she described as being like a brother. (Young’s father has coached both of them.) Townsend is also competing in women’s doubles with Nicole Gibbs.

“I don’t approach it that differently,” Townsend says of the mixed competition, compared with the women’s. “I think that for me, personally, it’s having a guy on the other side. The ball is coming a little faster. You know that the guy is going to come after you the majority of the time, so you have to be more alert. Whereas women’s doubles, you can take some more chances and be a little more aggressive.”

She added, “But when it boils down to it, it’s the same.”