Meet the Martian Aviator, a smartwatch that talks back 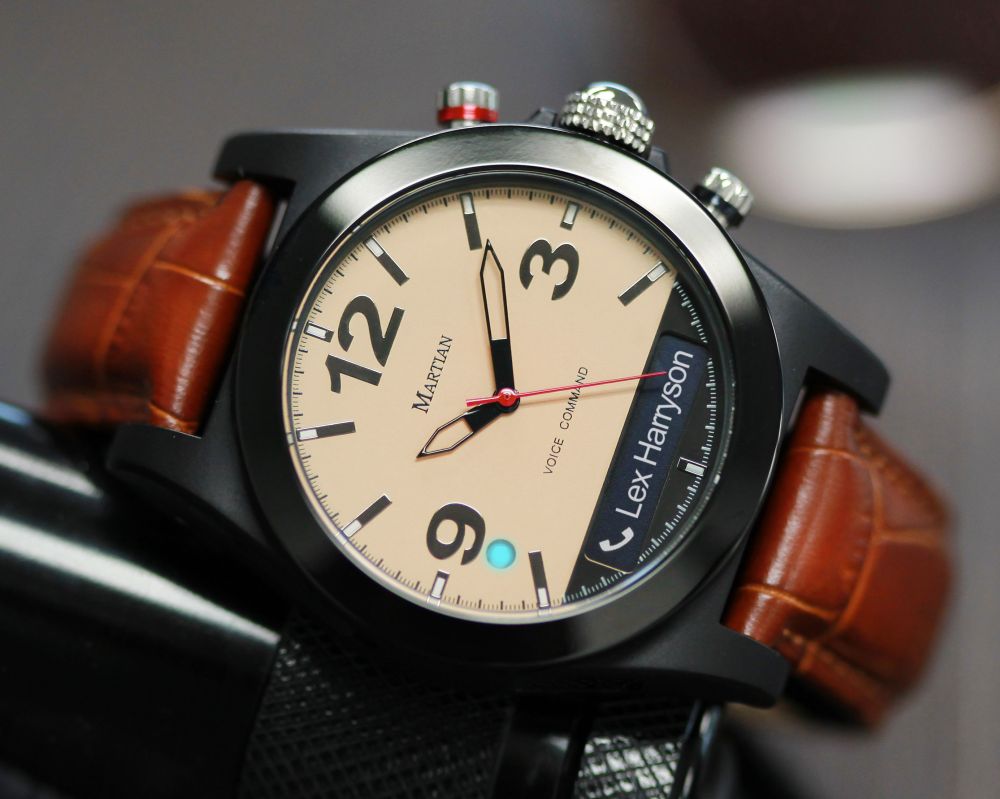 I love a good smartwatch, but I feel like a dork wearing one. Even supposedly style-minded models like the Apple Watch and Pebble Time Steel exude a certain geekiness; you can tell at a glance that they’re tech-pieces, not timepieces.

The Martian Aviator B10 looks like your average Timex, but secretly delivers the single best feature of any smartwatch: notifications.

The Aviator—one of five new watches in Martian’s Voice Command series—includes a speaker and microphone so you can have phone conversations with your wrist, Dick Tracy-style. It’s a smartwatch designed for those who value fashion over features.

With its brown leather strap, black bezel, and understated beige face, the B10 is arguably the classiest-looking model in the collection. The all-white Electra S10 and crystal-ringed E10 were definitely designed with ladies in mind, while the all-black Alpha T10 and Envoy G10 should appeal to men. All watches share the same features, and all—but the Electra E10 ($299)—are priced at $249.

I tested the Aviator. Nice though it looks, I must admit it feels a little cheap. Plus, it’s quite chunky, and therefore a little uncomfortable on the wrist. The aforementioned Apple (AAPL) and Pebble watches are much slimmer, despite packing color screens and other advanced gadgetry.

Thanks to its built-in microphone and speaker, the Aviator lets you interact with your phone even when your phone isn’t nearby. You can invoke Siri, Google (GOOGL) Now, or Samsung’s (SSNLF) S-Voice just by pressing a button, and also carry on phone conversations. Alas, this sounds cooler than it is. Although I found the speaker quality to be fairly good considering its size, it’s just not comfortable to hold your wrist near your mouth for long periods. However, for short-burst activities like listening to your last text message or dictating a new one, this feature is awesome.

Like a traditional wristwatch, the Aviator sports an analog watch face, but with a small OLED window across the bottom. The display lights up when you push a button or receive a notification, and notifications are definitely a Martian specialty. You can set the watch to vibrate in different patterns depending on the type of alert: phone call, text message, Facebook update, calendar appointment, and so on. The screen displays a scrolling ticker—not ideal, especially for long messages—but still helpful for knowing whether or not you need to reach for your phone. If you miss an alert, a sharp tap of the watch glass will make it reappear.

The screen is also helpful in the dark, because although the watch hands don’t glow, the screen will show you the time, date, temperature, and other info.

The watch also offers a leash mode that can help you find a misplaced phone (assuming it’s in Bluetooth range), a tether option that notifies you (via vibration) when you’ve left your phone behind, and a camera mode for triggering snapshots remotely. This stuff can definitely come in handy, though a couple times the watch triggered false “separation” alerts even when my phone was just a few feet away.

Battery life is another key factor for any smartwatch. Martian’s models clever employ two batteries: one for the watch itself, another for the “smart” stuff. The watch battery will run for a full two years, meaning even if the rechargeable one dies while you’re out and about, you’ll still have a functioning timepiece. The rechargeable battery is good for five days, according to Martian, which my tests confirm.

Although, the watch’s battery life is a little disappointing, since my Notifier can easily go 8-10 days between charges. And the Aviator is bigger, though obviously some of the extra features require extra power.

In case the leather band wasn’t enough of a hint, the watch isn’t waterproof, though it can withstand splashes. No showering or swimming with it.

My review sample exhibited a few mechanical issues, namely extremely stiff function buttons and a crown that occasionally popped out on its own, leaving me with analog hands that were no longer moving.

The real issue with the Aviator is that it becomes the default audio destination for phone calls, incoming and outgoing alike. It’s like keeping a speakerphone strapped to your wrist, and inconvenient for those times when you want to speak privately. To do so, you have to tap your phone and route audio back to the handset. It would be nice if Martian’s companion app gave you the option of disabling just the speakerphone functions, but it doesn’t.

I think if you’re going to spend $250-300 on a smartwatch, something like the Pebble Time Steel is the smarter buy. Although, if you don’t mind a rubber wristband, the $199 Pebble Time is also a great option. Of course, for just $129 you can get the Martian Notifier, which offers the same great notification features and longer battery life. Until something smarter comes along, that’s the watch I’m keeping on my wrist.