After on-air shooting in Virginia: What makes coworkers turn violent? 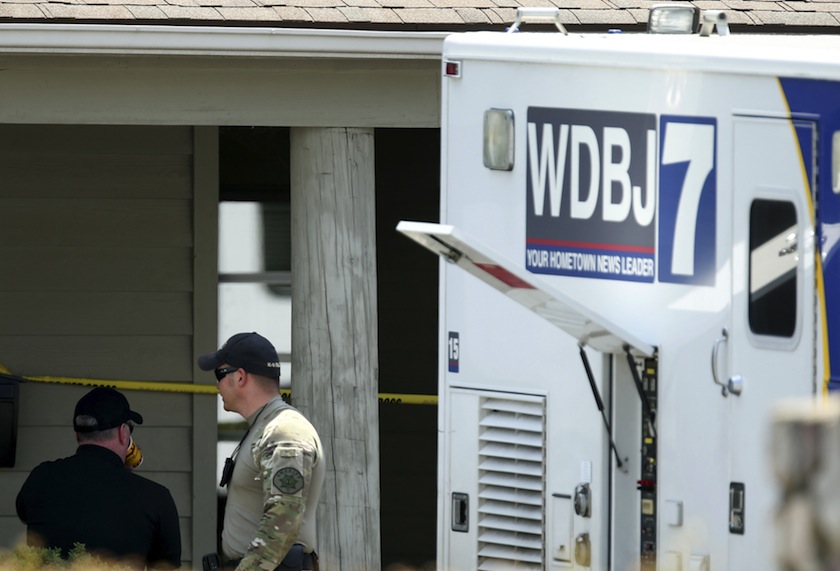 The WDBJ7 live truck is seen outside of the Bridgewater Plaza in Moneta, Virginia, August 26, 2015. The suspect in the on-air shooting of two Virginia television journalists was pronounced dead at a hospital on Wednesday (August 26), police said. The suspect Vester Flanagan, 41, shot himself after a police pursuit following the shooting of the journalists from CBS affiliate WDBJ7 in Roanoke, Virginia. Police pursued the suspect and in the late morning, local media and CNN reported the suspected shooter had shot himself. He was transported from the scene by ambulance but was later pronounced dead at hospital. REUTERS/Chris Keane - RTX1PSA4
Photograph by Chris Keane—Reuters

Just about all of us are familiar with the tensions and challenges of working life—dealing with a difficult boss, feeling ridiculed at a staff meeting, working alongside a deceptively competitive coworker. And many of us know all too well that moment where we feel our emotions just might get the best of us.

Indeed, conflict and the office seem to go hand-in-hand, and that’s partly what makes episodes of workplace violence so uncomfortable to digest. It stokes a fear that we might wind up on the receiving end (or even be the deliverer) of an attack.

The murder of two television journalists in Virginia on Wednesday was alarming for that reason and much more.

Reporter Alison Parker and cameraman Adam Ward, who both worked for WDBJ in Virginia, were gunned down as they broadcast on live television by a former station worker, Vester Lee Flanagan, who had reportedly expressed grievances against the company. Flanagan, who killed himself shortly after the on-air shooting, had worked at the station as a reporter but was let go after several confrontations with colleagues. He’d also complained of racial discrimination. A complaint he filed with the Equal Employment Opportunity Commission was dismissed, according to statements made by station manager Jeffrey Marx. “So we had an unhappy former employee, but this happens. Usually they move on,” Marx said.

Anyone who has spent significant time at a job can relate to Marx’s comments. But what distinguishes those who can deal with that tension from those who can’t?

Kenneth Robbins, clinical professor of psychiatry at the University of Wisconsin-Madison, points out that, given the modern-day office set-up, “it’s amazing that workplace conflict isn’t more of a problem,” he said. Homicides resulted in 404 workplace deaths in 2013, down from 475 in 2012. When people develop relationships—whether with friends or a romantic partner—in most circumstances, we get to know people gradually over time and learn how they react to criticism, shared tasks, and competition as we determine how close to get. But at work, that’s not the case. Coworkers are essentially shoved together in close quarters with little input as to whom they work with and sit near, day after day. “You’re spending hours and hours together and you really don’t know how to avoid the kinds of differences that you might be able to avoid in your personal life,” Robbins says.

Such a setting presents a major challenge for people who aren’t comfortable with developing and maintaining interpersonal relationships or are inexperienced with them. When conflicts arise—whether it’s criticism of their performance or butting heads during a team project—they aren’t able to take it in stride. This problem has been compounded by an increased prevalence of people who live alone. In such cases, relationships among colleagues may represent workers’ most intimate ties. And the inability to deal well with conflict is “the biggest commonality [in episodes of workplace violence],” Robbins says. A sense of a lack of control is another common trait of those who resort to workplace violence. “What anger is is an attempt to take control,” Robbins says.

There’s no telling if Wednesday’s tragedy could have been avoided by any means. And based on what we know now about Flanagan’s tenure at WDBJ, it’s hard to find fault in the station’s dealings with him. (And of course, there’s no justifying Flanagan’s actions, regardless of how he was treated by his former employer. Responsibility for dealing such issues ultimately falls to the individual involved.) That said, there are ways for employers to cut down on risks, Robbins says.

First, employers can ask questions during the hiring process that are aimed at understanding a candidate’s personality, rather than just their skills and professional background: “How did you deal with criticism at your last job? What about in school? Or when you played sports?”

If a candidate stands out as sensitive to rejection or finds managing conflict difficult, that doesn’t necessarily mean he or she won’t be a good employee. And, with a little effort, managers can create an environment that will work well for such sensitive employees.

“In many workplaces, when you see someone who’s clearly sensitive to criticism, people just stop criticizing them, which pushes them further afield until you reach a point where you just can’t keep them, ” Robbins says. He suggests sitting down with every employee—to not single any one person out—and asking them how they’d like to deal with contentious circumstances that may pop up in the workplace. If there’s an in-office between spat, does the employee want to take care of it on his own, or should the boss intervene? When it comes to performance reviews, would the worker prefer a frank conversation or would data that shows how she compares to her peers be more helpful?

“I think most people don’t know how to respond [to those questions], so you need to talk to them about what’s worked in the past,” Robbins says.

In more acute circumstances of erratic or threatening behavior, a manager can order an employee to undergo a mental-health evaluation as a condition of continued employment. (WDBJ had required Flanagan to get counseling but his outbursts continued, according to The New York Times.) Mental health professionals can report the results of such screenings to employers, usually after the evaluated employee signs off on it, though just how much a doctor can disclose is determined by a patchwork of state and federal privacy laws. In some states, mental health professionals are required to notify employers of employees’ violent threats, but raising such a red flag erroneously can subject a practitioner to a breach of confidentiality lawsuit. And the Americans with Disabilities Act adds another wrinkle: employers are required to accommodate workers with a mental health issue so long as they can perform their job and they’re prohibited from discriminating against workers with a disability, including mental illness.

Mental health evaluations are common among airline pilots and police officers, but they’re not just applicable to employees who carry a gun or fly planes. Flanagan “It could be that the mental health of this person means it is not safe for them to do this kind of work,” Robbins says. But as Wednesday’s shooting shows, the sad truth is that intervention from mental health professionals and even the termination of an employee can’t eliminate every threat.