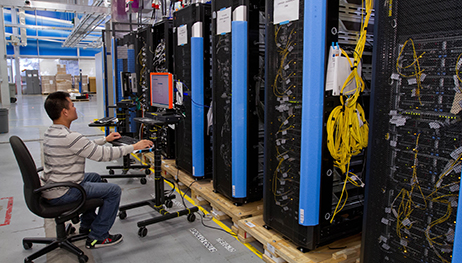 Here’s some good news for enterprise giants like Hewlett-Packard and Dell that get a big part of their revenue from selling tech hardware to businesses. Worldwide server sales grew strongly in the second quarter, according to two different reports this week.

Both firms cited Hewlett-Packard (HPQ) as the market leader in worldwide server sales, with both firms saying the tech titan brought in roughly $3.4 billion in the second quarter. Dell was second followed by IBM (IBM), Lenovo, and Cisco (CSCO).

The biggest loser among big tech vendors was IBM, with both research reports saying that its server sales fell significantly from the previous year. IDC said IBM took in $1.99 billion in the second quarter of 2015, a 33% drop from the $2.97 billion it brought in during the same period last year. Gartner gave a similar assessment, saying IBM’s sales in the category dropped 34% the previous year.

Lenovo is on the rise when it comes to servers, both reports said. Gartner said its server sales hit $949.8 million in the second quarter, more than five times more than the $151.6 million it brought in during the three months in 2014.

Of course, IBM dropping while Lenovo rising in server sales shouldn’t be too surprising, Lenovo bought IBM’s x86 server business in the fall of 2014 for $2.1 billion.

The news of increased server sales couldn’t have come for a better time for big enterprise hardware vendors that have seen the sales of personal computers decline and eat into their businesses.

Also on Wednesday, IDC issued a report forecasting a weakening PC market, with worldwide shipments expected to tumble 8.7% this year. It won’t be until at least 2017 when the research firm believes shipments will stabilize.