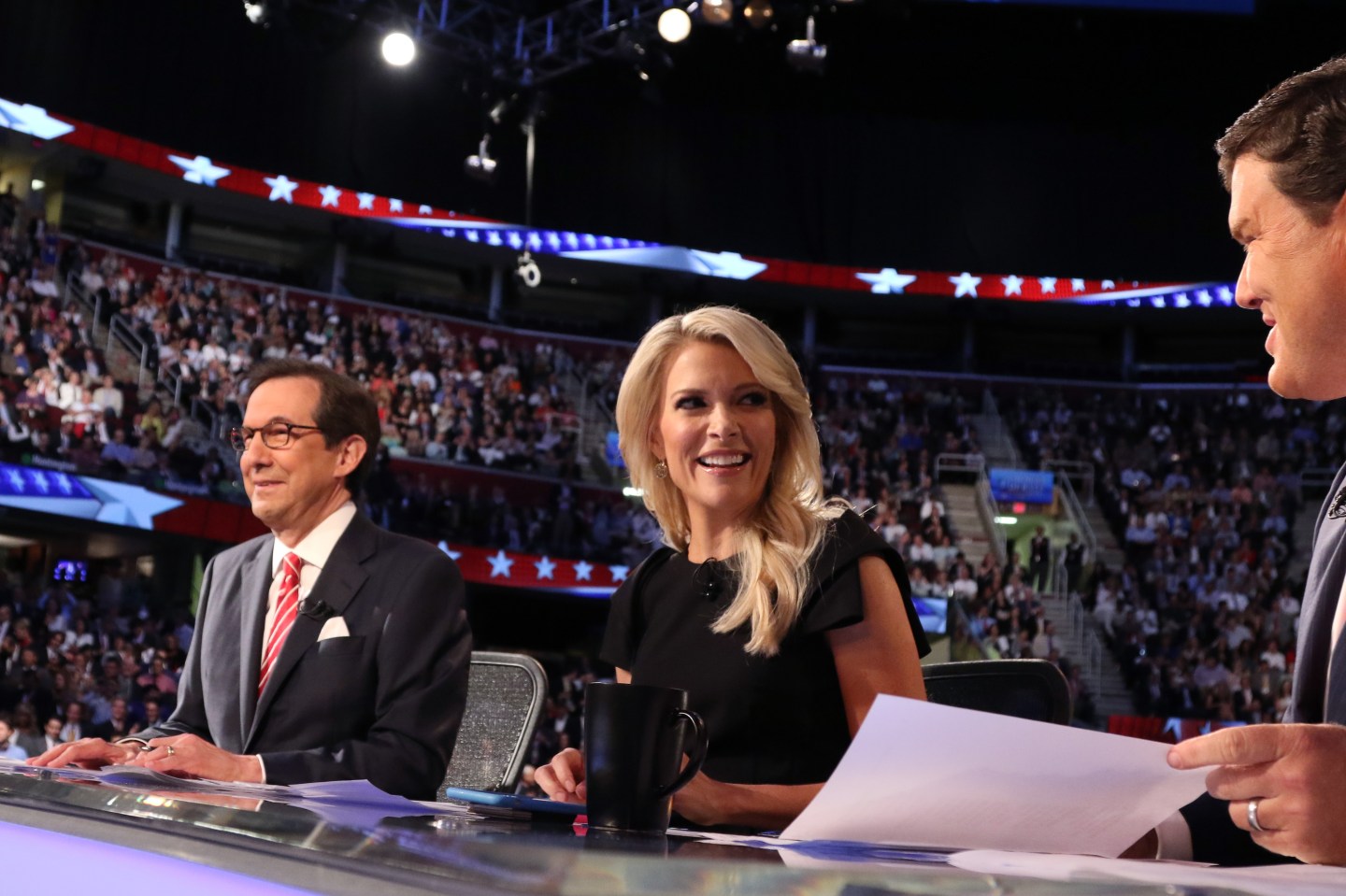 The contentious sparring between Donald Trump and Fox News Channel host Megyn Kelly that lit up during the first GOP presidential primary debate, with the largest audience in for a primary political debate, became its own news cycle. Now, a new series of tweets Trump launched late on Tuesday shows that he isn’t about to let the largely one-sided feud rest.

Trump lit into Kelly upon her return to her Fox News show, The Kelly File, after vacation. Trump claimed that she was “off her game” and said that she take another “eleven day unscheduled vacation,” apparently playing off a New York magazine report that Fox News chairman Roger Ailes had ultimately sided with Trump in the face of ratings and sent Kelly off to let the waters still.

To top it all, Trump repeated a remark calling the journalist, lawyer, and Fox News rising star a “bimbo.”

Kelly’s colleagues — and her boss, Ailes — quickly leapt to her defense. Ailes called Trump’s attack “unacceptable” and “disturbing.” That suggests Trump may not be able to count on the good will of Fox News, generally seen as a needed ally for whomever would climb the heights in the GOP.

Trump not only addressed Kelly directly, but kept answering or retweeting messages from others on Twitter, extending his Tweetstorm. It began with him tweeting:

.@megynkelly must have had a terrible vacation, she is really off her game. Was afraid to confront Dr. Cornel West. No clue on immigration!

I liked The Kelly File much better without @megynkelly. Perhaps she could take another eleven day unscheduled vacation!

"@ColeHudson68: @megynkelly @FoxNews @theBlaze @greta @OreillyFactor Megyn needs to go back on vacation. What a waste of an hour on Fox."

"@bigpaulfla: @realDonaldTrump She has come back looking like Nancy Grace"

"@mstanish53: @realDonaldTrump @megynkelly The bimbo back in town . I hope not for long ."

Fortune contacted Fox News for a comment or interview but received no response before publication.

In a statement provided to CNN, Fox News chairman Roger Ailes said, “Donald Trump’s surprise and unprovoked attack on Megyn Kelly during her show last night is as unacceptable as it is disturbing.” He went on to call Trump’s messages “attacks” and said that he fully supports Kelly. Ailes also said, “Donald Trump rarely apologizes, although in this case, he should. We have never been deterred by politicians or anyone else attacking us for doing our job, much less allowed ourselves to be bullied by anyone and we’re certainly not going to start now. All of our journalists will continue to report in the fair and balanced way that has made FOX News Channel the number one news network in the industry.”

Bret Baier, one of the co-moderators during the debate and a colleague of Kelly’s on Fox News, tweeted that Trump’s continued attacking “needs to stop.”

It's been 19 days since the debate- @realDonaldTrump has made his feelings clear. But THIS needs to stop http://t.co/8BmVPZTGdp #let-it-go

Kelly did not directly address Trump on Twitter, but did post two messages, one quoting criticism of Trump by Jeb Bush and, the other, an alleged list of Trump’s immigration proposals, including requiring Mexico to pay for a border wall, deporting all illegal immigrants, and ending birthright citizenship.

Trump’s previous criticisms, particularly his “blood” remark, caused a heavy backlash, but such reactions have yet to demonstrate a moderating effect on what Trump says.

Even if things calm down in the short term, don’t expect peace to last. Kelly is scheduled to moderate the January debate on Fox, and it is unlikely that either she or Trump will take a more conciliatory approach.

Update 5:20 pm, August 25: Fox News contacted Fortune with the statement from Ailes. The channel had confirmed at the beginning of Kelly’s vacation that it had been pre-planned and not a response to Trump’s initial response to the debate and questioning.

After Fortune heard from Fox News, this story was amended and corrected to clarify Fox News’ position, including the details of what the network said in current and previous statements.