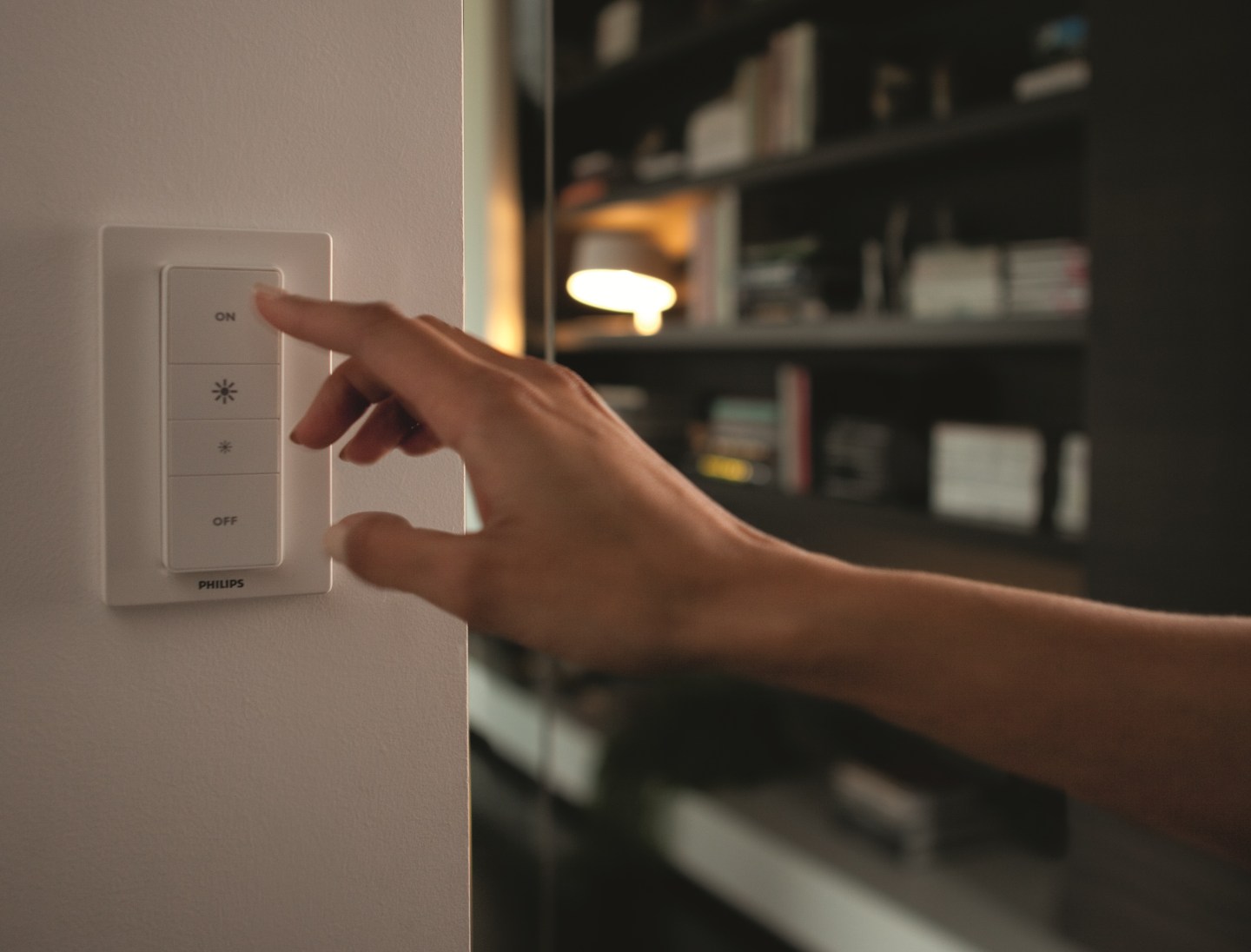 Royal Philips, the maker of the Internet-connected Hue lighting gear that can be controlled via an app, has introduced a wireless switch that lets homeowners dim their lights with a remote or wall-mounted switch. Instead of focusing on connectivity, this product is more about convenience.

The idea is to give homeowners a way to set the mood without having to install wiring, making a good option for nervous home owners or renters.

However, it’s also Philips’ answer to a rush of competitors hitting the market using an alternative technology to deliver the same sort of wireless switch capability that are expected to launch soon. The lights, from companies such as Avi-on and GE or Switchmate will use Bluetooth Mesh radio technology to communicate between the switch and the light bulb instead of ZigBee radios, which is what Philips Hue lights and the switch uses.

The wireless dimming kit works without a Hue bridge, which is what converts the Hue’s Zigbee radio signal to Wi-Fi and let’s the lights connect out to the Internet. The wireless dimmer can connect to the bridge as well.

Either way, for smaller groups of 10 bulbs, the dimmer switch helps provide Hue with an alternative for customers who find its Tap switch, a round hockey-puck sized device that also acts as a physical switch for controlling the lights, a little too oddly shaped to stick on their walls.

That being said, as a diehard fan of Hue lights and of Lutron’s similar dimmer switches, I found Hue’s version of this technology underwhelming.

The Hue dimmer kit contains a white Lux light, which normally sells for $19.95 and the dimmer kit, which could be used as a remote control or installed as a switch on the wall. The remote is rather bulky and battery-powered. When installed on the wall it wobbles, which makes it feel somewhat cheap. The design and printing on the remote look like a prototype, rather than a finished product, especially when compared with the Lutron gear, which it clearly mimics.

But a Lutron dimmer switch costs about $55 and requires wiring which many people will balk at doing. I’ve not seen the Avi-on/GE or Switchmate gear in person yet, so I’ve no idea how the Philips dimmer kit will compare to those. From a lighting perspective, the product works exactly as advertised. However, in many dimmer switches you can turn the light on using the brighter toggle button to gradually brighten the light. That isn’t the case with this kit. You can only turn it on from the on button.

But when turned back on, the light will automatically default to the setting it was at previously. This means if you want to set the mood, you should do it before your party guests arrive or romantic evening starts to play out. Otherwise you risk blinding people while you fiddle with the settings. However, the lights and the dimmer kit are software-controlled so Philips can update them to tweak this in the future if it sees fit.

The kits are expected to go on sale in September for $39.95, and can be used to control up to 10 Hue light bulbs.

Unlike my rush to buy with other Hue gear, I think I’ll sit this one out.

Update: This story was updated to reflect a software update that allows the dimmer to connect to the Philips Hue bridge.