The NFL’s Jen Welter is storming the field 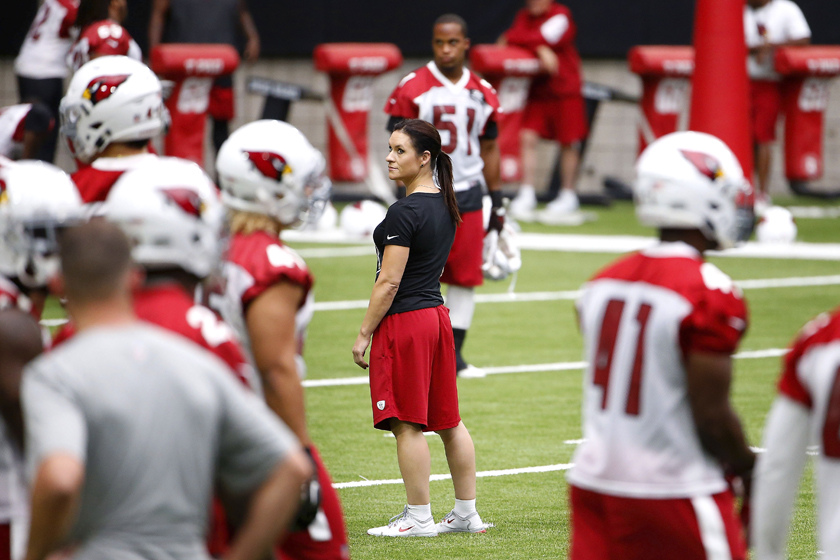 A little over a year ago the country’s four major sports leagues had exactly zero female coaches. But last August, the San Antonio Spurs hired Becky Hammon as an assistant coach, making her the first woman to coach in the NBA. And in July, the NFL broke its own gender barrier, when Jen Welter joined the Arizona Cardinals.

It may seem shocking to imagine a woman coaching in the most macho of pro leagues, but Welter’s résumé is custom-tailored for the job. After a rugby career at Boston College, she played pro football for 14 years, first as a linebacker in the Women’s Football Alliance, then as a running back in the men’s Indoor Football League. (Welter was the first woman to play a position other than kicker on a men’s pro team; she also coached in that league.) Along the way she earned a master’s in sports psychology and a Ph.D. in psychology.

Welter says what’s most surprising is that women are only now being added to the coaching roster. She points to Nancy Lieberman, the most dominant woman in basketball in the 1980s, hired in August as an assistant coach by the Sacramento Kings. “Look at what she did and when she did it,” Welter says. “And yet it’s taken this long for Nancy to work in the NBA?”

For Welter, the case for gender parity in coaching is pragmatic: Good leaders teach their team members, often by providing a viewpoint that they lack. “It’s not about having a woman or a man as a coach, it’s about offering players the best variety of perspectives,” she says. “And that might come from males and females working together.”

Welter is cautious when she is asked about the domestic violence issue, but she hopes that the players in her league can be agents for change—and not just within their sport. “There is always a microscope on the NFL,” she says. “Domestic violence is an issue in our society as a whole. We say, ‘Oh, it’s because he plays football.’ No. It’s not a football-specific issue. However, the blessing in the fact that these guys are watched is that it’s a call to action that the societal issue needs to be handled. We need to do a better job protecting women, educating them, and putting resources around them.”

For now, Welter’s title is assistant coaching intern, and she’s still vying for a full-time gig. But she has a chance to wield real influence in the league. That will mean an adjustment for players accustomed to dealing exclusively with men, says Lawyer Milloy, who played for 15 years and won a Super Bowl. “A good coach is a good coach no matter if it’s a man or woman,” he says. “But it’s a serious change for these guys. Certain things are going to be different when she walks by—their language, things like that.”

But Welter says her leadership depends as much on what she has in common with players as it does on their differences. As a former player, she understands that star athletes can often tune out their coaches. “I was quite a knucklehead,” she says of her own time on the field. “I was talented, and I knew it, and I probably didn’t listen to coaching as much as I should have.” Today, she’s able to see and explain the difference good coaches can make. “I’ve said to these guys, ‘If I ride you, it’s because I see your potential. I don’t care how good you are. Could you be any better?'”

The NFL could certainly be better. Hiring the best person for every job, instead of the best man, is a start.

A shorter version of this article ran in the September 1, 2015 issue of Fortune with the headline “Storming the field.”

Read more about the progress women are making in men’s professional sports:

Becky Hammon is breaking barriers in the NBA

How women are gaining yardage in men’s pro sports