Here’s what could happen to Cuban cigar prices 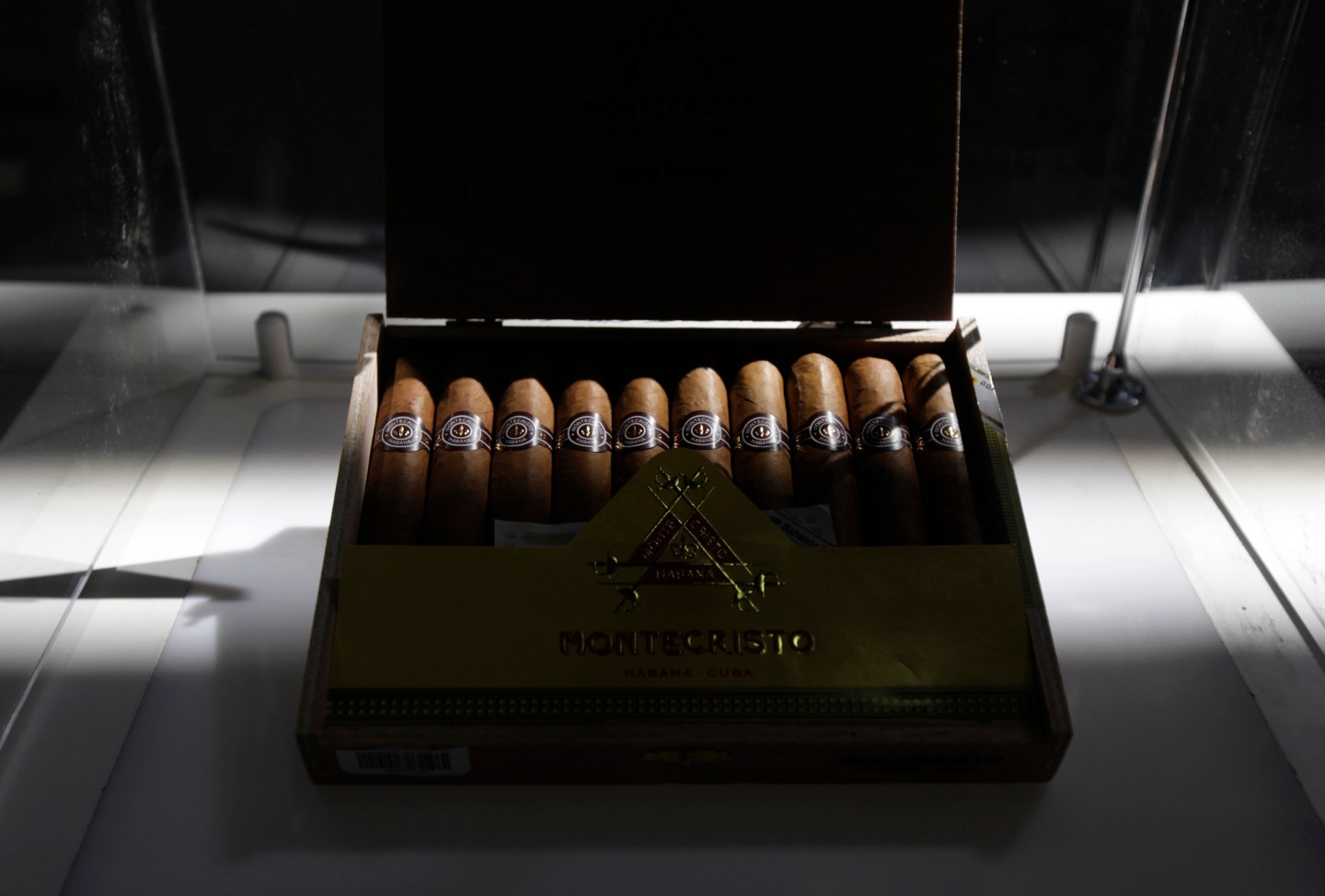 Forbidden pleasures are always the most pleasurable — and expensive. Last year, a cigar auction in London saw a lot of 50 Cuban cigars from 1992 go for $41,463. Cuban cigars have been the stuff of legend to U.S. smokers ever since President John Kennedy imposed broad import bans in 1962.

But with relations slowly thawing between the two countries, the entire cigar industry is wondering whether the supply of product to the U.S. will be reopened. And, if it is, what would happen to the price of a hand-rolled and aged Montecristo? Could the easy availability of Cuban cigars mean they will lose their cachet — and high price? Or will sudden increased demand overwhelm the hand-made supply and drive the cost of a smoke even higher on the global market than today?

There are strong arguments in either direction.

Currently, Americans traveling in Cuba can bring back $100 worth of cigars, thanks to the January 15, 2015 relaxation of trade restrictions under the Obama administration. That’s a big change from a complete ban on new Cuban cigars. But even Secretary of State John Kerry’s presence at the reopening of the U.S. Embassy to Cuba for the first time since 1961 doesn’t mean that you’ll be able to head to the corner tobacconist to light up a hand-rolled Cuban cigar. True opening of trade will still be tricky.

In 1996, Congress passed the Cuban Liberty and Democratic Solidarity (Libertad) Act, also known as the Helms-Burton Act, which locked into place the restrictions enacted by Kennedy. “Sanctions are typically issued by the executive branch as a regulation and don’t require an action of Congress,” Dan Newcomb, a sanctions lawyer at the firm Shearman & Sterling, told Fortune. “Until Helms-Burton is modified, the [President] doesn’t have the power to change the import regulations very much.” Until the House and Senate agree on some action and a president signs a bill into law, there will continue to be no commercial importing of Cuban cigars.

Of course, you could head to Cuba on some type of visit approved by the U.S. and pick up a handful of stogies. Typical prices for a cigar from a Havana tobacco shop now can run from $6, for a Partagás Serie D, No. 5, to $31 for a Cohiba Behike BHK 56. With 25 cigars to the box, that means $150 to $775. Plus, there’s a 10% charge from the Cuban government to change U.S. dollars to the Cuban Peso. All in all, that can be an expensive pleasure.

Why prices could rise

Should Congress drop the barriers, the need to fly to Havana — or a country like Canada or the U.K., where importing Cuban cigars is legal — falls away. Cuban cigar-maker Habanos S.A., a joint venture between the Cuban state and Imperial Tobacco Group PLC, is optimistic about that scenario. According to Reuters, the company hopes to take 25% to 30% of the U.S. market and eventually hit 70%. The company says it could immediately sell between 70 million and 90 million cigars annually if the embargo came down.

And, as part of those assumptions, Habanos, may also be betting that increased demand could drive up global prices on Cuban cigars in general. A sharp increase in purchases coming from the U.S. would be met by the country’s limited hand manufacturing capacity of about 150 million a year, which is about 1% of the world market. Basic economics and high demand for fixed supply could suggest rising prices.

But then look at what happened to Russian vodka

Vodka had been a major premier export of the Soviet Union and a good way to bring in foreign currency, much as cigars are for Cuba. After the collapse of the U.S.S.R., the consumption of vodka in the U.S. became increasingly popular. But the uptick in demand attracted competitors.

U.S. distillers as well as from other countries such as Finland, Sweden, Poland, and even Italy decided to ramp up their efforts. (Smirnoff, originally a Russian brand, has been made in North America for decades.) By 2013, Russia’s most popular exported vodka, Stolichnaya Premium, fell out of the five top-selling brands in the U.S. and vodka imported from Russia dropped by 70 percent between 2012 and 2013. Consumers became accustomed to drinking vodka from many locations. That’s not the way to sustain premium pricing.

The cachet of Cuban cigars

Cuban cigars are known for the quality of the tobacco, their tight rolling, and years of aging. “They’re good and special,” said Stephen Yocco, the cigar buyer for Leavitt & Peirce Tobacco in Cambridge, Massachusetts, to Fortune. “Sometimes a little strong: not for everybody and not on an empty stomach, for sure.” Like a good wine, that owes to the terroir, or the combined effect of geographic, soil characteristics, and climate.

The romance of the Cuban cigar legend might keep the product prices a bit higher for a while, but if Habanos really wants a majority share of American purchases, the company will have to accommodate people of a wide range of price sensitivity. To do so would require machine manufacturing, which could undermine the brand value and potentially make it just another cigar.

According to Yocco, good cigars from other countries that run from $10 to $25, if retailers aren’t jacking up the price, provide strong competition. There is a legal Cuban-like cigar industry in Miami, run by families that left the country, to say nothing of manufacturing in the Dominican Republic, Honduras, or Nicaragua. There are also trademark disputes, with some historical names currently in the hands of non-Cuban companies. It might be that many U.S. consumers would be confused, or actually have developed tastes for products from other locations.

Finally there is a question of whether Cuban cigars are as superior as memory and myth suggest. Experts often prefer them, but there can be quality control problems and some in the business say Cuban cigars are overrated. If that’s true, wider availability could actually hurt pricing.

For the meantime, though, as they used to say long before the embargo, smoke ’em if you got ’em. Because your cheapest legal source is still a good airline flight and visa approval away.