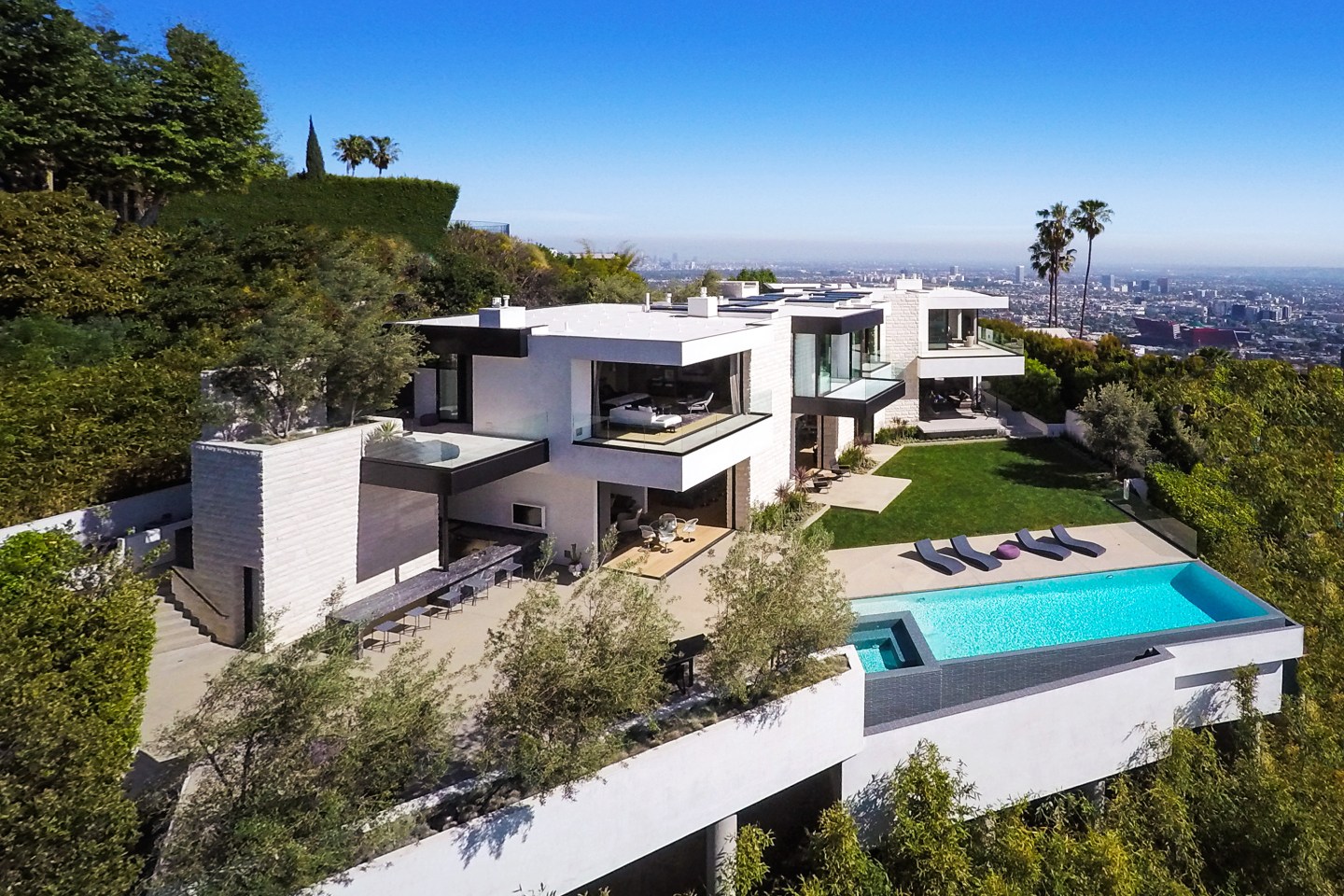 Nestled in the Hollywood Hills sits a five-bedroom, 8.5 bath, 12,530 square foot mansion that is the stuff of dreams. Down the block from Leonardo DiCaprio’s two-home compound and a street over from Keanu Reeves’ place, 9133 Oriole Way has panoramic views, an infinity pool that seems to flow right into the LA skyline, and a spa, wine cellar, screening room, and oversized subterranean garage.

A manse, where not an expense has been spared, fit for a young Hugh Hefner-wannabe.

So why can’t this house sell?

9133 Oriole Way went on the market for $38 million in March 2014, just as LA’s high-end real estate market was gaining steam. The property has had two top-drawer real estate agencies representing it since then, tons of media publicity and even a $40,000 “movie” made to tell its story, replete with bikini-clad models. Yet, this house has had price reductions — and still remains unsold 17 months later.

It turns out that even high-end luxury properties can have shortcomings that no amount of marketing or pizzazz can solve, even during a red-hot, luxury real estate buying spree. And for 9133 Oriole, the biggest shortcoming may be the too-high expectations brought to the negotiating table by the seller, Sean Sassounian, a developer who bought 9133 Oriole seven years ago at the depth of the recession, poured millions into its renovation and then expected to sell it for $35 million.

The address, 9133 Oriole, came on the celebrity radar in 2005, a faint blip when British singer and songwriter Dido bought it for $4.1 million. It was a shadow of itself then, one-third the size, but it always had location going for it.

Then in 2008, in the midst of the recession, Sassounian bought the house for $4.85 million and began a four-year project to raze it and build in its place a state-of-the-art modern estate that he planned to move into. According to both sets of agents who have tried to sell the property, Sassounian spared no expense and took his time—building a sophisticated home with three kitchens for entertaining—catering, outdoor cooking and hanging out—and top of the line materials, finishes and woodwork in every room.

Life and the arrival of three children during the construction got in the way, and in early 2014, Sassounian decided to put the property up for sale. Asking price: $38 million.

The first real estate firm chosen to represent the listing was The Agency, founded by Mauricio Umansky, the husband of “Real Housewives of Beverly Hills” regular Kyle Richards. The Beverly Hills-based global luxury real estate firm managed to get the property covered by a number of national media, including The Wall Street Journal, Financial Times, and Fortune.

Within days of its listing, the first agent, Blair Chang, says he brought Sassounian an all-cash offer for $32 million. The owner turned it down.

In the following months, Chang says he brought in a couple more $30 million plus bids – also rejected.

Several months later, the offering price was cut to $35 million. The problem with the house, according to Chang, is it’s “on the wrong side of the street. Not all the windows have great views of the city.” It also didn’t help that the house sits right on the road and lacks complete privacy.

In April, the listing was given to the real estate team of the moment, Rayni and Branden Williams and their frequent collaborator Ben Bacal. The trio had wowed the market in December with the $70 million sale of 1181 N. Hillcrest Road in Beverly Hills to billionaire Markus Persson, the creator of video game Minecraft.

A speculator property like 9133 Oriole, the 1181 N. Hillcrest property had originally listed for $85 million. Its quick sale helped inject momentum into LA’s already sizzling luxury property market and fueled developer dreams of making killings. According to data analytics firm CoreLogic, 2015’s second quarter set a new record for sales of $2 million-plus homes in LA County, with more than 1,000 moving during those three months. In the two quarters before, when the market was already characterized as hopping, the number hadn’t even cracked 800.

To sell 9133 Oriole, the Williams and Bacal decided to make a video, a tactic they used successfully to lure Persson to LA to check out the property he would ultimately buy. “Los Angeles is seeing a lot of big foreign money coming in, looking for properties,” Branden Williams says, explaining the strategy. “There’s also Internet money.”

The new real estate agents restored the $38 million price tag. Sassounian still “felt he should be getting $34 million or $35 million for the house and that meant we had to list at $38 million again,” Williams explained.

The agents used the video—filmed with five cameras and three drones and set to “My House” by Flo Rida—as a news peg. The media ate it up: The Los Angeles Times, “Good Morning America”, “Inside Edition” and Time spotlighted 9133 Oriole for this over-the-top marketing technique. None mentioned the fact that the property had previously been listed at $38 million or that it had been on the market for more than a year before the video was shot.

“We were looking to reignite interest,” Williams says. “I’ve done tons of showings since the video. We just got a lease offer for $250,000 for one month from the Saudis. But the developer wants to sell it as a brand new house so he turned it down.”

Meanwhile, the house’s price has now been cut to $32.8 million, hurting Sassounian’s chances of getting even $30 million on the final sale. So does Sassounian have any regrets that he didn’t take one of those earlier offers, including that all-cash offer of $32 million? “You never look back on these things,” Sassounian told Fortune. “With this new price, I feel like it will move quickly. We’ve already had one potential buyer make multiple visits.”

Pat Wechsler is a veteran business reporter who has worked for Business Week, Bloomberg, New York magazine and Newsday.

This article has been edited to remove the word “novice” in connection with Mr. Sassounian’s development experience. Mr. Sassounian’s counsel describes him as “an entrepreneur who owns and has developed numerous commercial and residential properties,” including the property described in this article.