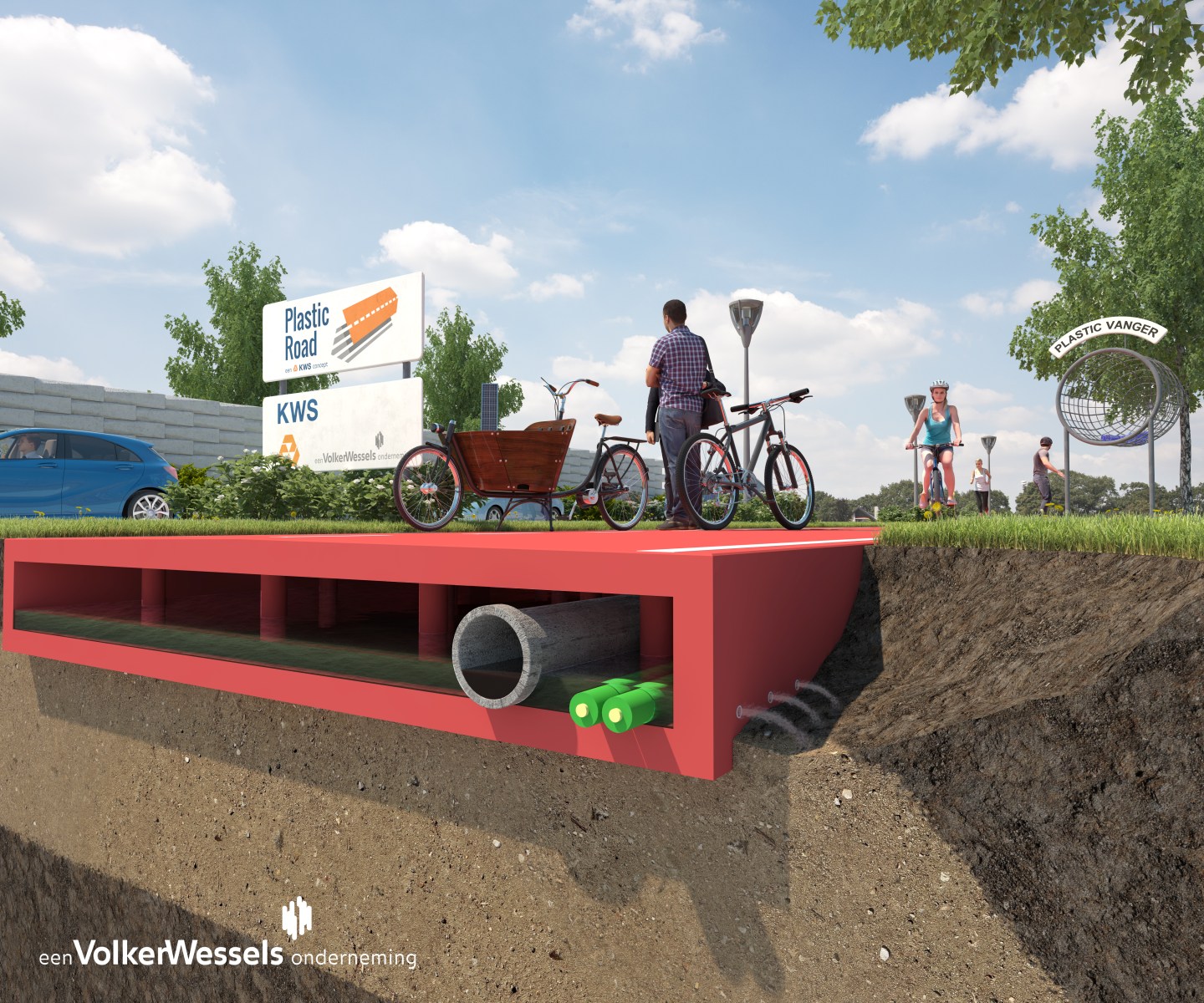 Greenhouse gases aren’t just generated by cars travelling over roads—asphalt roads themselves aren’t so great for the environment.

Anne Koudstaal and Simon Jorritsma, civil engineers with the Dutch company Infralinq (a unit of Royal VolkerWessels Stevin N.V.), are pursuing an idea that’s not just more sustainable, but easier to install and more functional: Roads made out of plastic.

The concept—dubbed simply PlasticRoad—calls for prefabricated sections of roadway made out of recycled plastic, which would snap together like Legos. Hollow spaces in roads would carry infrastructure like electric or fiber-optic wire.

A road made out of plastic bags isn’t as far-fetched as it sounds—we already have recycled plastic docks, and even highway bridges.

PlasticRoad would solve several problems Koudstaal has observed in the Netherlands, but that impact locales around the world.

“We have soft soil in the Netherlands, and asphalt is quite heavy,” Koudstaal says, “So we have a lot of sinking in the roads.” Stone for Dutch roads also has to be imported, while a high water table makes flooding a constant concern. In addition to carrying cable, PlasticRoad’s open interior would collect runoff from heavy rainfalls, and distribute it back into the ground slowly—or, in areas with water shortages, capture rainwater for use.

Installation of a PlasticRoad would be much simpler than laying asphalt, mostly because the road surface would be fabricated off-site. Workers would dig a road bed and line it with sand or aggregate, then lay down the road in sections 5 meters long and 2.5 meters wide. Repair would be equally straightforward—a damaged section of road could be replaced in minutes.

Then there are the environmental aspects. Though asphalt is recycled at a high rate, it’s a petroleum-based material, and its production can hardly be described as green—the EPA estimates that an average asphalt plant emits up to 41,000 pounds of carbon monoxide and up to 31,000 pounds of particulate matter per year, not including the impact of extracting crushed rock. Asphalt is also less durable than you might think—the top layer of an asphalt road must be replaced every 20 years, at best.

Koudstaal thinks a plastic road can do better—“It might go 100 years of lifetime.” And materials would come from hard-to-recycle plastics that are now mostly burned or dumped.

PlasticRoad is also targeting the plastic already floating in the ocean, with a hopeful eye on the work of fellow Dutchman Boyan Slat. Slat’s Ocean Cleanup nonprofit is developing a system of booms and filters that would passively extract floating ocean plastics. The group has a four year timeline for deploying its first array, and has estimated that it could extract 70 million kilograms of plastics from the ocean in ten years of operation.

Koudstaal says Infralinq has received a flood of interest since the announcement of the PlasticRoad project, and is now investigating potential development partnerships.