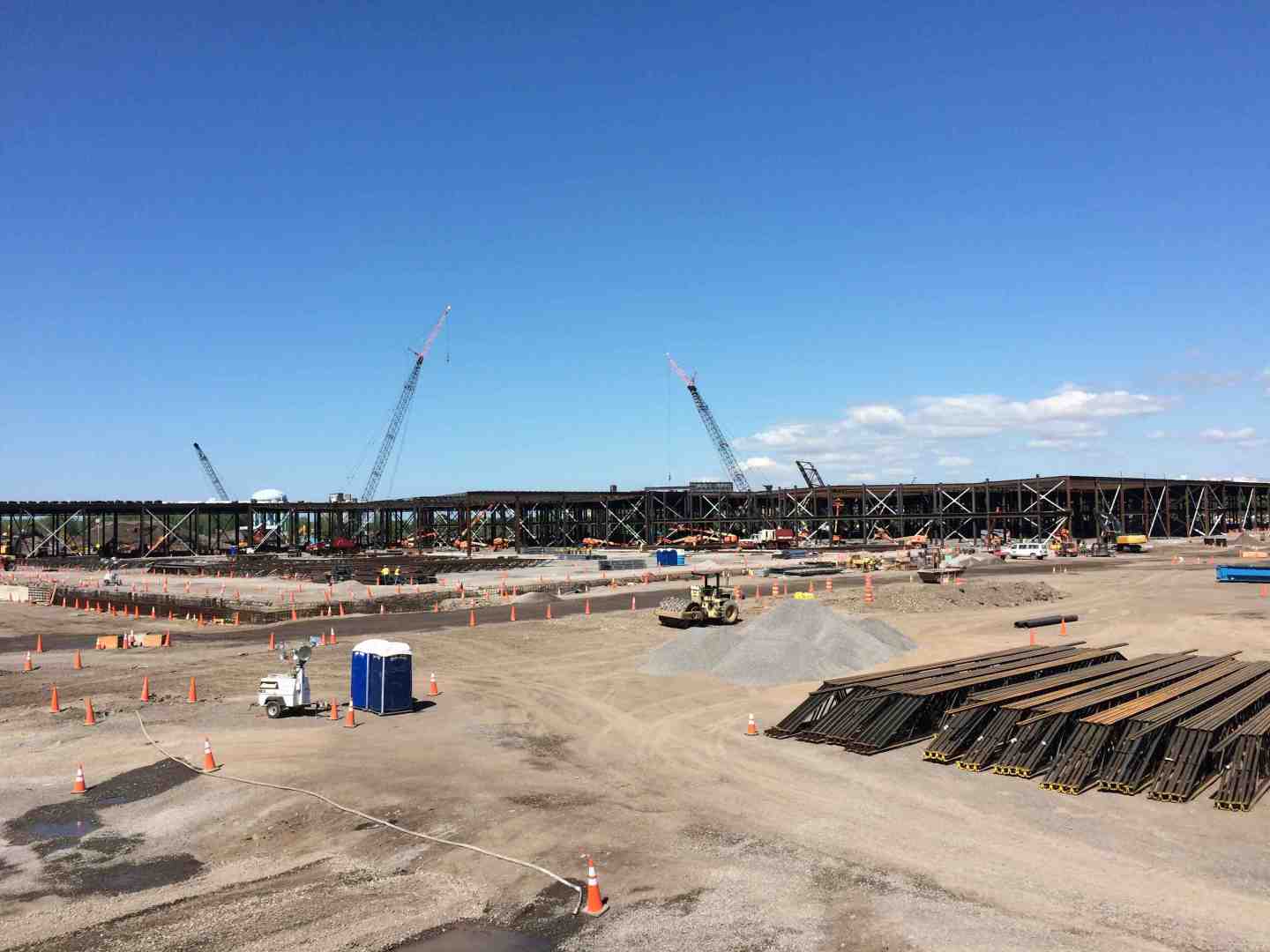 Last week, workers finished building the structural steel frame for SolarCity’s huge, 1 million-square-foot solar panel factory in Buffalo, in upstate New York. When completed, potentially early next year, the factory will be the largest of its kind in the Western Hemisphere.

The factory is a very big deal for SolarCity, as well as the region, which was hit hard by the loss of the steel industry in the 80’s and the economic downturn in recent years. SolarCity and New York Gov. Andrew Cuomo’s offices have said the project will create close to 3,000 jobs in western New York and a total of 5,000 jobs across the state.

The potential of new jobs is part of the reason why Governor Cuomo held a “topping off” ceremony at the factory construction site last week. At the ceremony, Cuomo and a group of workers signed a steel beam used in the facility. Of course, as such media events go, photographers for the governor and SolarCity captured the ceremony and what the factory currently looks like.

The exterior is still incomplete. Work on it isn’t expected to be complete until the last three months of this year.

When the factory is finished it will eventually house machines that can churn out highly efficient solar cells made from layers of silicon and copper. Other equipment will help workers package modules together into panels, laminate them with glass, and equip them with the needed electrical components.

This is the first factory for SolarCity, which up until now has bought solar panels from manufacturers and built a business off of installing, financing, and marketing solar systems. Last year SolarCity acquired startup Silevo, which has been making a new type of highly efficient hybrid solar cell in a factory in China.

Last week is the first time I noticed the governor’s office calling the facility “the Gigafactory,” a reuse of the nickname given to Tesla’s huge battery factory that is under construction outside of Reno, Nev. SolarCity doesn’t seem to be calling its Buffalo factory a “Gigafactory” in its press materials or earnings reports. Of course, Elon Musk is both SolarCity’s chairman and Tesla’s CEO.

Construction on SolarCity’s factory started just 11 months ago. Zheng Xu, the CEO of Silevo, said at the recent ceremony that the construction project was the fastest one he’s seen done internationally.

In return for getting such a good deal, SolarCity has to meet certain to hit certain operational milestones that include employing a certain amount of employees within a specific time period. It must also spend $5 billion in capital expenses within New York over 10 years. If the company fails to meet these milestones, it has to pay $41.2 million to the foundation for each year it doesn’t meet the requirements.

Specifically, SolarCity has to commission the factory within three months of when construction is completed, and reach full production output within three months after that. SolarCity also has to employ 1,460 people within the factory for the first five years, and employ another 2,000 workers in New York to sell, market and install the solar panels for five years. In addition, SolarCity is supposed to work with the foundation to bring in another 1,440 support contractor and supplier jobs in New York, and also make an effort to consider New York suppliers as partners.

As SolarCity acknowledged in its latest earnings report, scaling up production at such a fast rate, while maintaining quality will be difficult.