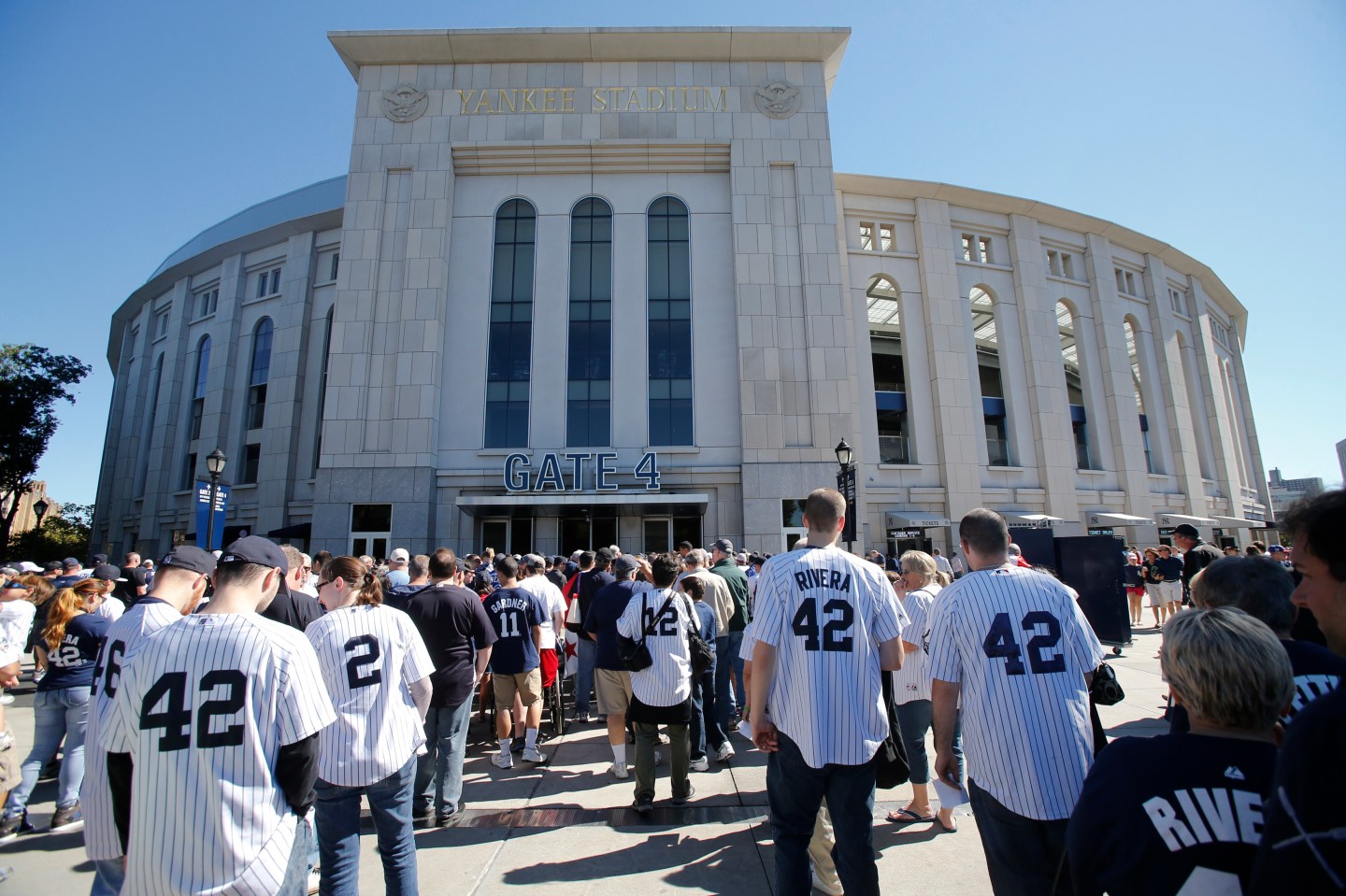 If you’ve ever spent a long time in line outside a stadium, you know the frustration. You’ve already paid for a ticket, only to wait for the privilege of going inside—where you’ll probably spend more of your money. The New York Yankees know it too. And so the baseball club has partnered with the tech security company Clear to ease stadium entry.

Based in New York City, Clear calls itself a “secure identity platform” and uses biometrics—your fingerprint—for faster entry at airports and other venues. Here’s how it works: Skip the traditional line, step up to a screen or mounted tablet, and lay down your finger. Clear recognizes you and your information and authorizes entry. You still need to present your ticket to a ticketing agent, but you can skip the security line. (There are still random screenings.) Think of Clear as a TSA Pre-Check or Walt Disney FastPass for the ballpark.

Clear is available at 12 airports in the U.S. (including San Francisco, Denver and Las Vegas) but only began appearing in ball parks this season. After a “soft launch” with the San Francisco Giants at AT&T Park last September, it officially debuted there at the beginning of this season. Since then, it launched at Coors Field (home to the Colorado Rockies) in late July, and now at Yankee Stadium beginning on Friday. The Yankees are putting Clear at only two gates to start—one of them is the entrance to the suites, the other is a public gate near the main lobby—but there will be tents this weekend where fans can sign up.

The technology continues to attract attention in the world of sports and entertainment. Clear CEO Caryn Seidman-Becker says the company is in talks with other ball parks as well as non-sports venues like concert halls. (Long lines, of course, are not exclusive to airports and baseball games). “It’s simple: this is a way for our fans to get inside more quickly,” Yankees SVP of strategic ventures Marty Greenspun tells Fortune. “We already knew that the Giants beta-tested it last year. Our hope now is that other venues in the marketplace also adopt the Clear model, and then there will be certain synergies that can happen.”

Those synergies would come with a cost. Fans can sign up for the baseball version of Clear (called Fast Access) for free, giving them access not just to Yankee Stadium events (including NYCFC soccer games and concerts) but to other Clear-equipped baseball venues, like AT&T Park. But the full Clear membership, which includes airports, costs $15 per month. There are currently 400,000 full members, all of whom get the stadium access without re-enrolling.

Seidman-Becker says that the Clear system appeals to ballparks for safety purposes as much as it does for fan experience. Clear is recognized as anti-terrorism technology by the U.S. Department of Homeland Security. “Sports stadiums are starting to look a lot like airports,” she says. “Yankee Stadium holds 49,000 people and the majority of those people show up 30-45 minutes within the start of a game. It’s a lot of traffic at once. Our technology enables them to get in safely and securely.” Clear’s ambitious goal: Installation in all major sports stadiums, domestically and internationally.

Many fans may not care to sign up for Clear, may not notice it, or may decide it won’t save them a significant amount of time. (You still need to do bag check if you have a bag; you still need to hand your ticket to a human being.) But the authentication technology could have bigger implications beyond entry. Other parts of a venue could use Clear systems to talk to each other and make other verification processes go faster, such as checking age for alcohol consumption or I.D for a souvenir purchase.

With luck, Clear could even alleviate the mounting difficulty professional sports venues face in enticing fans to come to a game in the first place. The experience of watching at home has become so good, and the drawbacks of going live so many (high cost, transportation time, wait times at the door), that some fans don’t see the value of paying to go. Shorter lines could sweeten the deal.

“In general, getting in and out of a stadium, everyone grouses that it’s worse than it used to be,” says Seidman-Becker. “You’re seeing friction in this area in so many places, and our technology can be a great cure to the bottleneck. In a digital world where people are staying home on their computers, sports stadiums have to do better. Lots of baseball teams are seeing that now and reaching out to us. We love all of our baseball partners, but as a New York City company, we are especially ecstatic to be partnering with the Yankees.”