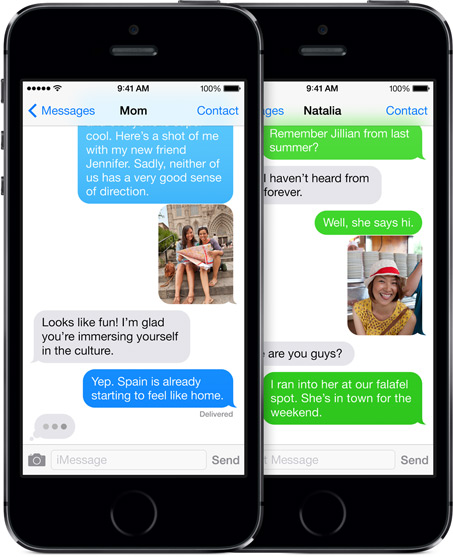 It feels like Apple got away with one. Even though a judge agreed the company hurt consumers by sending millions of text messages into a blackhole, the iPhone maker was still able to wriggle away from a class action lawsuit this week. It’s one of those cases where the court probably got the law right, but the outcome still feels unfair.

The case in question involves Apple’s iMessage service, which lets iPhone owners text each other for free via their data plan instead of over SMS, which is clunkier and can result in charges from the phone carrier.

While iMessage is popular, it can also create big technical headaches when an Apple (AAPL) user ditches their iPhone for another device such as a Samsung phone. If that happens, the person won’t receive any messages from friends or family members who still have an iPhone – even though, from the senders’ perspective, it will look like the message went out just fine.

Many people got upset over this bug, and understandably so. Just think how many friends or couples got into arguments because it appeared someone was ignoring their texts. Or think of the parents who worried because their child didn’t reply to a message.

What’s worse is that Apple knew about this bug (especially as customers and phone companies kept complaining about it) but didn’t really do anything about it. For a long time, there was no practical way for a former iPhone owner to escape this message blackhole, though Apple finally introduced a website last year where people can flag the problem.

All of this is probably why U.S. District Judge Lucy Koh of Silicon Valley, who is one of the most tech savvy judges in the country, ruled in November that a class action lawsuit against Apple could go forward. Koh rebuffed Apple’s claims that it did nothing wrong, and that the consumer who filed the lawsuit was simply whining that the technology didn’t do what she thought it should do.

Instead, Koh agreed that Apple appeared to be liable for “a tortious interference with contract” claim — in plain English, this means that Apple wrongly interfered with phone carrier contracts that entitled customers to receive text messages.

That ruling opened the door for everyone who had lost text messages due to the iMessage bug to bring a claim against Apple, potentially requiring the company to pay out millions in damages. But what the judge gave, she took away again via this week’s ruling.

According to the new ruling, the woman bringing the lawsuit may have been harmed, but she nonetheless can’t go after Apple with a class action case. The reason is because Apple was not responsible for all of the missing messages. For some people, their phone contract never gave them a right to receive texts in the first place while, in some cases, the messages went missing for other reasons, and so on.

Judge Koh pointed out that the proposed class action covered everyone in the U.S. who switched from an iPhone to another phone, but that this category was too broad. It included people who were harmed by Apple and some who weren’t – and there’s no practical way to quickly identify who falls into each category.

This means that people can still file individual lawsuits against Apple but, realistically, almost no one will since it would’t be worth the time and expense. The woman who filed the class action can appeal, of course, but for now it looks like a long shot.

The bottom line is Apple could and should have done more to help people avoid the iMessage mess, but thanks to a legal loophole, it’s off the hook in court. Here’s the ruling (I’ve underlined some of the relevant bits if you want)