Here’s why small satellites are so big right now 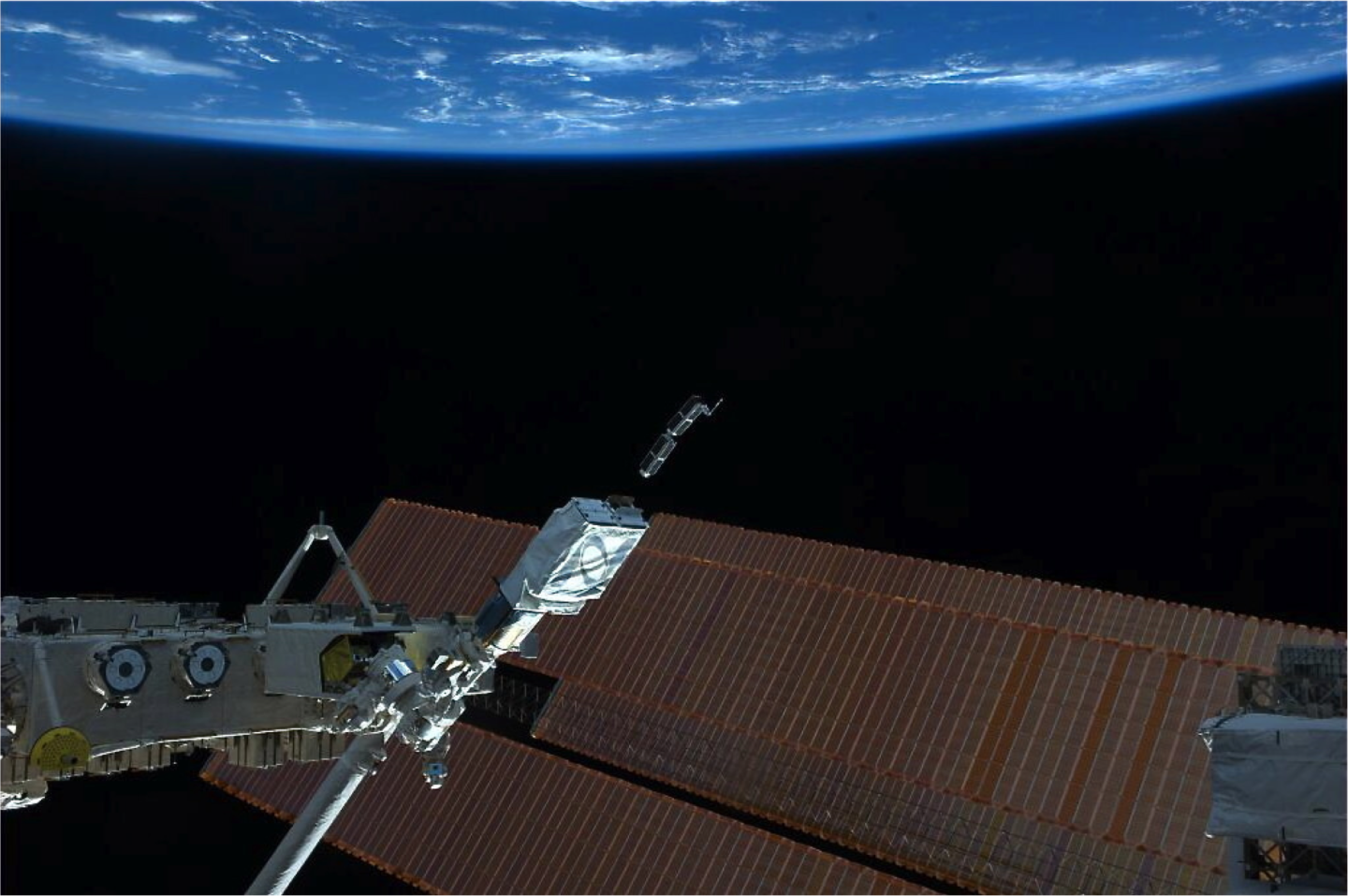 It’s a bullish time to be in the commercial space business these days. The industry as a whole has grown more than sixfold in the last five years to include more than 800 companies. Deal activity has increased for three years straight, according to data published by CB Insights. In the first half of 2015 the industry hit four-year highs both in terms of deals completed and dollars invested (driven largely by a $1 billion Series D funding round for SpaceX in January).

Most of that investment has been swallowed up by a private space launch industry anchored by Elon Musk’s SpaceX. The allure of new data streams from orbit (powered by a new breed smaller satellite technologies) has lured an increasingly prestigious roster of venture capital firms and Fortune 500 companies toward the satellite industry. It’s an industry long considered too capital-intensive and risky for many investors since a late-‘90s collapse of several satellite communication companies.

Interest in small satellites—typically defined as those under 500 kilograms (1,100 pounds)—has grown over the years based on a number of factors working in tandem: The miniaturization of once-bulky satellite components, standardization of many satellite parts, and other factors have trimmed costs substantially. That has made the building, launching, and operation of “smallsat” constellations increasingly feasible.

When it comes to investment, there’s also a psychological factor at play, says Will Marshall, co-founder and CEO of earth imaging satellite service Planet Labs. “There’s a sudden threshold that’s been reached,” Marshall says. “Some people made some bets and won. Investment is recognizing that, and investors like to see some early players succeed. In some sense, some of the early players in the space renaissance have made it easier for investors to get their heads around it.”

Planet Labs is one of those early players in the newspace renaissance. Founded in 2010, the company has a constellation of 36 small satellites in orbit, each of which is capable of imaging the earth at three to five meters resolution. The company now has a growing stable of paying customers eager to get their hands on regularly refreshed satellite imagery of specific parts of the planet.

Planet Labs isn’t the only smallsat success story. Companies like Digital Globe, O3B, and Skybox—which was acquired by Google (GOOGL) last year for $500 million—have all put satellites in orbit while lining up customers for data and other services those satellites provide. Their relative success coupled with the vast potential for space-based Internet services and real-time satellite imaging has made believers out of many investors and potential customers alike. As a result, the industry has pulled in more as companies like SpaceX prove commercial access to space can be less expensive, and increasingly feasible.

What investors are betting on is nothing short of the future of big data, the Internet, and global market intelligence all rolled into a suite of orbital technologies. “What’s driving a lot of the excitement in the eyes of investors is really ones and zeros—it’s software, it’s services,” says Richard Rocket, CEO and co-founder of space industry analysis firm NewSpace Global. “It’s not so much the infrastructure itself, or the satellites themselves.”

Right now those services fall into two main categories: space-based Internet and high-resolution earth imaging. Some have likened the advent of reliable, space-based Internet service as a second coming of the first Internet boom. Smallsats would provide technology capable of plugging new people and markets into the global web-based marketplace and enabling new business models (Facebook last week unveiled a solar-powered, broadband-beaming drone aircraft designed for the same purpose). Likewise, near-real time (or even real time) satellite imagery would allow global corporations to monitor all their assets at the same time and generate high-resolution visual data for individual companies, governments, or those trading on global financial markets.

“It’s a really, really big opportunity with very attractive economics,” says Steve Jurvetson, a partner at Silicon Valley venture capital firm Draper Fisher Jurvetson. The firm was an early investor in both SpaceX and Planet Labs. “There will be a whole other wave of businesses that build on the data streams or are ancillary to these smallsat companies.”

The upfront capital investment in space-related businesses is high, Jurvetson adds, but the amount of room to run is virtually unparalleled in any other industry. “Compared to other industries, I have never seen such an enormous margin for improvement. There’s this canonical thing about a startup needing to pitch a 10X improvement to be a worthwhile investment. You rarely see an entrepreneur pitch a 100X improvement. But in space we’ve seen 1,000X, and really we’ve seen 10,000X.”

That growth is a testament to the huge amount of technical talent flowing into the newspace industry, and a sign of how imperfect the incumbents are, Jurvetson says. Those two ingredients make for a market in which nimble startups have a lot of space to move in and grab market share.

Over the past decade, roughly $2.5 billion has been invested in small satellites, NewSpace Global’s Rocket says; nearly half of that amount has come into play in the last 12 months. In January, Google and Fidelity announced a $1 billion investment in SpaceX to help the company build out its own constellation of Internet-beaming satellites. That same month, newcomer OneWeb announced that it would likewise put in orbit a constellation of 648 smallsats capable of supplying Internet to points on the ground below (the estimated $2 billion project, set to begin launching in 2018, is not accounted for in NewSpace’s $2.5 billion number cited above).

On the startup side, companies like Spire and BlackSky Global have in the past year gathered tens of millions in venture cash from the likes of Bessemer Venture Partners, Lemnos Labs, RRE Ventures, and Vulcan Capital—investments that would’ve been hard to come by just a few years ago. BlackSky promises an earth imaging constellation that will deliver imagery more frequently than existing services do at a lower price point, Spaceflight Industries CEO Jason Andrews says. Spire will offer a range of data services, most notably real-time maritime tracking of ships anywhere in the world and relevant weather data.

These investors are banking on the idea that in just a few years data from smallsats will begin impacting business models around the world. It’s a fact not lost on corporate investors either. Many see real-time imaging data as well as better weather and asset tracking as potential competitive edges they can’t afford to ignore, Rocket says. Investment in smallsat technologies and companies is also coming from global corporations like Airbus (EADSY), Harris Co. (HRS), FedEx (FDX), and—of course—Google. For these companies, it’s not just about investing in the next big thing, but investing in keeping their existing revenue streams competitive.

“Almost regardless of business model, those Fortune 500s today who ignore what smallsats are doing … (i.e. earth imaging, providing communications or Internet services) they’re going to be on the wrong end of financial evolution in the next decade,” Rocket says. “The number of Fortune 500s that are putting money into small satellites—it’s not an alarming rate, it’s not irrational exuberance, but it’s an increasing rate that we expect to continue.”

The greatest potential land mine threatening the smallsat boom in the near term has little to do with the smallsat industry itself and much to do with how those satellites get to orbit, Rocket says. The June 28 launch failure of a SpaceX Falcon 9 rocket—one which was carrying 8 Planet Labs imaging satellites—reminded the industry that space is still a risky business. If the launch industry can’t begin launching more frequently and more reliably than it is now, there could be a bottleneck that would trap some of these smallsat assets on the ground.

“In the next couple of years we predict that billions will continue to be invested in smallsats,” Rocket says. “But if we do not see launches happening at a much higher rate than it is now—and more of these launch vehicles coming online and becoming operational—we’ll see a stalling. Investors won’t get the returns they want, and investment will slow down.”