Here’s what the owner of a small business really earns 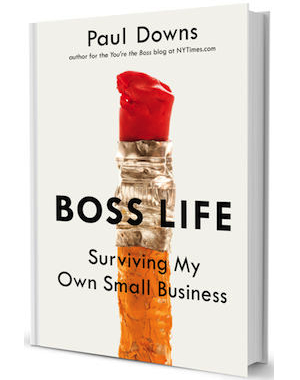 Paul Downs has been running a custom furniture company for nearly three decades. In this excerpt from his first book, Boss Life: Surviving My Own Business, he chronicles a year in the life of a real small business, with a real boss, a real set of employees, and the real challenges they all face.

My biggest expense is payroll. Payday is every second Tuesday. The amount varies depending on the exact number of hours worked, but it has been averaging $36,000. This covers hourly wage, pension contribution, and payroll taxes for fifteen people, including me. It doesn’t include the cost of health insurance, which is $10,140 a month (to cover nine of the fifteen workers and their families, including me). The pay rate for each worker ranges from thirteen dollars an hour to thirty-six dollars an hour. Add them up and the cost to employ all those people for one hour is $317. (That number excludes my own salary.) That’s before payroll taxes, workmen’s comp insurance, and unemployment insurance, which vary in complicated ways but add another 18 percent or so to the cost.

Payroll is a very difficult number to reduce, unless I get rid of some employees. I can’t simply have everyone work fewer hours—not at this point. We lost a lot of time with Company S, and we are behind on our other work. And if we don’t complete jobs, we won’t get the preship or final payments, which is the only cash I am sure to receive.

I cannot ask people to work more hours without pay. That is illegal for unsalaried workers. And a reduction in pay rates is a drastic and morale-crippling move. In the fall of 2008, I cut my workers’ pay by 15 percent, and it was not popular. I got away with it because it was obvious to everyone that we were in serious trouble, and they had no place better to go. In 2012, the woodworking economy is still rocky, but it’s a lot better than it was. If I cut everyone’s pay again, some of them will leave—most likely, my best guys. We still have work to do, and I’m hoping that we will turn this thing around, so I don’t want to risk defections.

Fortunately, there’s one worker who will never quit. He’s getting a good-size paycheck, too, so stopping his income will have an effect. I know from long experience that this guy will put up with anything I give him—work longer hours, do multiple jobs, reorder his personal finances, even loan money back to the company if necessary. Who is this patsy? You already guessed: the boss.

Over the years I have raised and lowered my pay countless times, using it as a throttle to increase or decrease our cash burn rate. Do I have enormous piles of gold coins in my basement, a vast store of personal wealth that I can tap when needed to fund my business? Not at all.

I’m not broke, but my business has not generated much wealth for me. Manufacturing custom furniture is not known as a lucrative profession, because it isn’t. For example, take a look at how my company performed from 2003 to 2011. Sales for that period totaled $16,352,367. The profits? The total for those years is negative. The vast majority of those losses happened before the crash in 2008, when The Partner and I were doing a very bad job of trying to grow the company. From 2003 to 2008, our losses totaled $1,086,648. The Partner ate much of that when he left. My father, my brother, and I—the remaining shareholders—made emergency loans in those years just to keep the doors open. Since 2009, I have managed to stop the bleeding, and the company has made profits totaling $210,114. That still leaves an accumulated loss of $872,084.

I have managed, during some very rocky years, to pay my bills. First and foremost, all the employees who have worked for me got paid, on time and in full. All the taxes were paid, on time and in full. All the vendors and my landlord were paid in full (not necessarily on time, but I used most of the post-2009 profits to gradually eliminate the debt). While the company owes my partners and me a pretty good pile of cheddar, it owes nobody else.

Between 2003 and 2010, my annual salary averaged $78,484. That number includes the amount I had to pay for health insurance—taxable compensation for a company owner. My cash wage was lower. Each year I loaned, on average, $29,363 of that back to the company (after I had paid taxes on it). That left me an average of $49,121 a year. I’m hardly one of those predatory CEOs making millions while my workers starve.

I have a lifestyle to match my income. My wife and I live very modestly. We don’t travel much. Even if we wanted to, the unpredictable behavior of our son, Henry, who is autistic, keeps us from anything but family visits. I own two crappy cars: a 1992 Toyota Camry and a 1999 Honda Odyssey. Nancy is very frugal and gets most of our clothes at the thrift shop. And we don’t eat out. Nancy is a very good cook, so we eat at home every night.

That windfall came right on time. My oldest son starts college in September, and my wife, in preparation for the empty-nest experience, is getting a master’s degree so she can teach. Her schedule will match Henry’s so that she can be at home when he is, and I can continue to work myself. Tuition bills for both of them will start in September. The first year will eat through all my savings.

I’m not complaining. I am doing better than the vast majority of people in the world. But I do not feel secure. I have pledged my personal wealth to cover debts that the company has incurred. Aside from the $387,098 that the company owes me, the lease on our shop space requires payment in full, even if we fail. I currently have twenty-six months left to go before I renew. At $9,250 a month, I am committed to shell out $240,500. The business has two credit cards with a $65,000 line of credit—we generally have about $30,000 a month in outstanding charges. If I get behind, they will come after my personal assets. And, realistically, there is a minimum level of spending just to keep some employees on staff and the lights on. If I have to lay everyone off, and there’s nobody to do the work, I am done. I have too much overhead to start as a single-man operation again. I need to spend $5,000 a day to be in business. If I have to reach into my pocket to do it, after sixty days I will have lost all my cash, and my house will be heading into foreclosure.

So owning a business, even one with millions in revenue, has not made me rich. I feel a great deal of shame at my lack of success. I can’t tell you how many times I have attended parties and felt humiliated when doctors and lawyers describe fancy trips to Africa, rounds of golf, and nice cars. If I had joined my contemporaries who went to law or business school, and stepped onto the corporate treadmill, I would at least have a high salary to show for my efforts. Sure, you can live that life and fail in any number of ways, but you also don’t have to invent the profession as you go.

Do you know any wealthy woodworkers? I didn’t think so. If they exist, nobody is talking about them. I’d really like to know how to convert my business into one that does great work, and pays its people well, and makes its owners rich. I haven’t figured out how to do this on my own. I need to look elsewhere for guidance.

Where can I get good advice? This has been a problem for me from the start. I opened my doors when I was fresh out of college, back in 1986. I didn’t even know anyone in the business. And there was no Internet back then, no magic universal library that answered every question. My nature is to try to figure things out on my own, which, in retrospect, has been bad for me. I stumbled on the most basic business problems: Where do I buy materials? How do I keep records? How do I pay taxes for my employees? How do I advertise? It was very hard to find answers. There were books about running a business, but none about my business. I never imagined that anyone would be interested in helping me, so I never asked for help. And I was always so strapped for time that I would implement the first idea I found, even if it was bad practice. I just muddled along for years and years.