This box opens up new possibilities for fresh food delivery 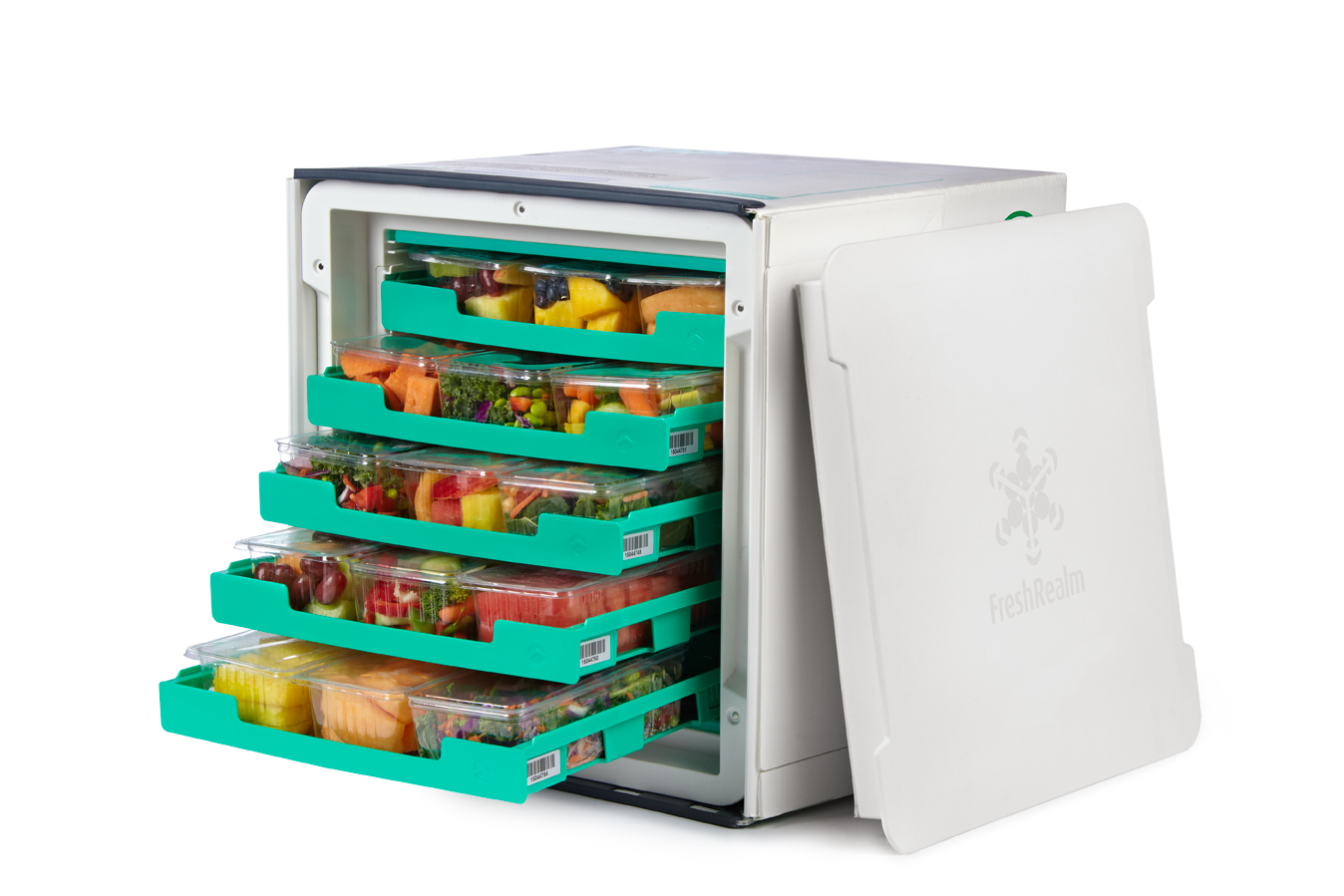 “If you think about all the people who go to the grocery story,” asks FreshRealm CEO Michale Lippold, “How many of them have everything else delivered to their house, other than their food?”

Lippold’s company is one of a number trying to make fresh food part of the broader shift to online delivery. Recipe kit services like Blue Apron and Plated, along with grocery services like Instacart, have been jockeying for position in a surging market. Time-strapped consumers are doing less grocery shopping and more eating out—even as a chorus of food pundits and cooking shows remind them they could be doing better.

The major meal subscription services, though, rely on low-tech and wasteful shipping technology—little more than lined cardboard boxes, with each ingredient packed in a plastic bag and kept cold with a disposable gel pack.

Lippold and his team thought they could do better, so they’ve spent the last two years developing a food shipping container called the Vessel, and a logistics platform to back it up.

Despite its sci-fi name and sleek design, the Vessel is basically a really advanced cooler, sized for shipping by common carriers like FedEx. Inside are five sliding drawers, a reusable cold source, and a lot of engineering. FreshRealm has been cagey about the details, and Lippold says only that it uses “a combination of convection and conduction.”

But the upshot is that every part of the container stays consistently between just above freezing and 41 degrees Fahrenheit, crucial for safety when shipping food, particularly meat.

Door-to-door delivery of products like milk nearly ended with the arrival of home refrigeration, and the travails of grocery-delivery services have shown how difficult it is to make fresh food delivery work in an era when people aren’t home as much.

FreshRealm hopes to solve that problem, and a few others. The company says the Vessel can sit on a porch and stay cold until late on the day of delivery. Its better temperature control allows for shipping prepared ingredients—sliced carrots, chopped onions, and even pre-cut meat.

And the entire box is reusable—FreshRealm’s software sends the shipper back to pick it up the next day. Contrast that with Blue Apron’s advice that waste-conscious subscribers cut open gel packs and empty them before recycling. Back in reality, the EPA says less than 15 percent of plastic packaging ever makes its way to the recycling bin—even when consumers don’t have to drain blue goop from it.

“Recycling is great, and we think everyone should do it,” says Brian Gleeson, spokesman for the food delivery service Terra’s Kitchen. “But reuse is even better.”

Terra’s Kitchen is the first service to sign up to use FreshRealm’s system, and has been delivering recipe kits to most of the West Coast for the past three months. Meals costing from $14 to $21 make Terra’s Kitchen substantially pricier than competitors, but their pre-sliced ingredients could be attractive for the same busy people who have made them increasingly popular in grocery stores.

Though Terra’s Kitchen handles design, marketing, and production of its meals, FreshRealm runs the packing facility and manages shipping. Lippold says the eventual goal is for FreshRealm to become a platform for a variety of growers and producers delivering delicate products from fresh-pressed juice to prepared salads.

FreshRealm was founded two years ago as a spinoff of Colavo Growers (CVGW), which still holds a 50% stake. FreshRealm also raised $10 million in 2014 from Impermanence LLC.