General Stanley McChrystal: We should all lead like gardeners 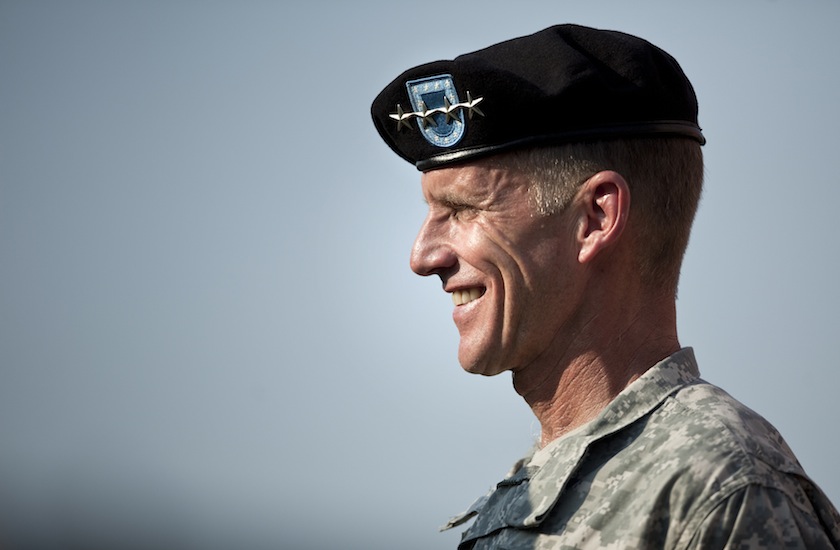 In 2003, as head of the Joint Special Operations Task Force in charge of incapacitating Al-Qaeda in Iraq, General Stanley McChrystal faced a formidable management challenge. He and his team were not facing the kind of conventional opponent that much military training focuses on. To succeed, McChrystal had to change the way he worked with his team. In the following excerpt from his book, Team of Teams, McChrystal describes what managers can glean from the practice of gardening, in matters of business or war.

Gardeners plant and harvest, but more than anything, they tend. Plants are watered, beds are fertilized, and weeds are removed.

Long days are spent walking humid pathways or on sore knees examining fragile stalks. Regular visits by good gardeners are not pro forma gestures of concern—they leave the crop stronger. So it is with leaders.

The military term is “battlefield circulation” and it refers to senior leaders’ visiting locations and units. I found that these trips, like almost everything, benefited from careful planning and focused execution. Most of these visits had multiple objectives: to increase the leader’s understanding of the situation, to communicate guidance to the force, and to lead and inspire. A good visit can accomplish all three, but a bad visit can leave subordinates confused and demoralized.

Visits offer an opportunity to gain insights absent from formal reports that have passed through the layers of a bureaucracy. I found it helpful to communicate before the visit the primary questions I had and to ask for background information I could review before arriving. On-site, briefings from the local leadership were appropriate, but they needed to be accompanied by less formal interaction with individuals further down the chain. It was pointless to bring junior members to big meetings in front of their entire chain of command and expect candor, but I found that creating the right venues was easy to organize.

There’s an art to asking questions. Briefings are valuable but normally communicate primarily what the subordinate leader wants you to know, and often the picture they provide is incomplete. Thoughtful questions can help fill in the blanks. Early in 2005 my intelligence officer, then– Colonel (later Lieutenant General) Mike Flynn, taught me a great technique. We were visiting a unit that boasted of having more than 250 intelligence sources (Iraqi civilians recruited to pass information to U.S. forces). I was deeply impressed. Mike then asked a simple question: “Can you describe your very best source? I’ll assume that all the others are less valuable.” The unit admitted that the best was new and unproven, and in an instant it was clear that their source network had little real substance.

I later used a specific question when talking to junior officers and sergeants in small bases in Afghanistan: “If I told you that you weren’t going home until we win—what would you do differently?” At first they would chuckle, assuming I was joking, but soon realized I wasn’t. At that point most became very thoughtful. If they were forced to operate on a metric of task completion, rather than watching the clock until they went home, the implications would be significant. Almost all were good soldiers and leaders, but they had been shaped into thinking in terms of their tour of duty, a time horizon that rarely predicted successful mission completion.

Once they recalculated, their answers were impressive. Most adjusted their approach to take a longer view of solving the problem. You might expect them to seek a quicker solution and an earlier ticket home. But they were experienced enough to know that real solutions demand the long view—simple fixes are illusory. Although I couldn’t change the troop rotation policy, as I left, I’d ask each soldier to execute his or her duties with that mind-set.

Communicating during visits is nonstop. From small group meetings with leaders to “town hall” talks to larger groups, I found it essential to let members of the command hear directly from me. I’d often start by stand- ing in front of them and asking them to look into my eyes and decide over the next hour if they trusted me. I told them I was doing the same with them. “You have the right to judge in person the leader who represents you—and I have the right to size you up as well.” I avoided talking down to them, and I tried to understand and respect their perspective. It was often difficult. Soldiers fighting a daily battle under frightening conditions can feel their leaders are far removed from their reality. There’s no magic cure for this challenge, and soothing words that aren’t backed up by action encourage cynicism. If, after hearing their problems or concerns, I couldn’t do anything about them, I found it far better to state that directly than to pretend I could change things. Simple honesty shows, and earns, respect.

It is important to be realistic. Visits are often planned by well-intentioned, energetic staff members who plan more activities than can be accomplished. Hurried “drive-by” interactions leave subordinates frustrated—if you come to ask questions, leave enough time to listen to the answers. And remember that even senior leaders are human. Congressional delegations would often arrive in Iraq so exhausted by the long flight and their jammed schedules that they would doze off as we tried to explain what we were doing. It is hard to learn or express support for the force if you are asleep.

Over my career I’d watched senior leader visits have unintended negative consequences. Typically schedules were unrealistically overloaded and were modified during the visit to cancel parts of the plan. On the surface it might be the necessary decision, but invariably soldiers who had spent days preparing a briefing or demonstration for the “great man’s” visit were informed at the last minute that all their work had been for naught. It was not a good way to improve morale.

I would tell my staff about the “dinosaur’s tail”: As a leader grows more senior, his bulk and tail become huge, but like the brontosaurus, his brain remains modestly small. When plans are changed and the huge beast turns, its tail often thoughtlessly knocks over people and things. That the destruction was unintentional doesn’t make it any better.