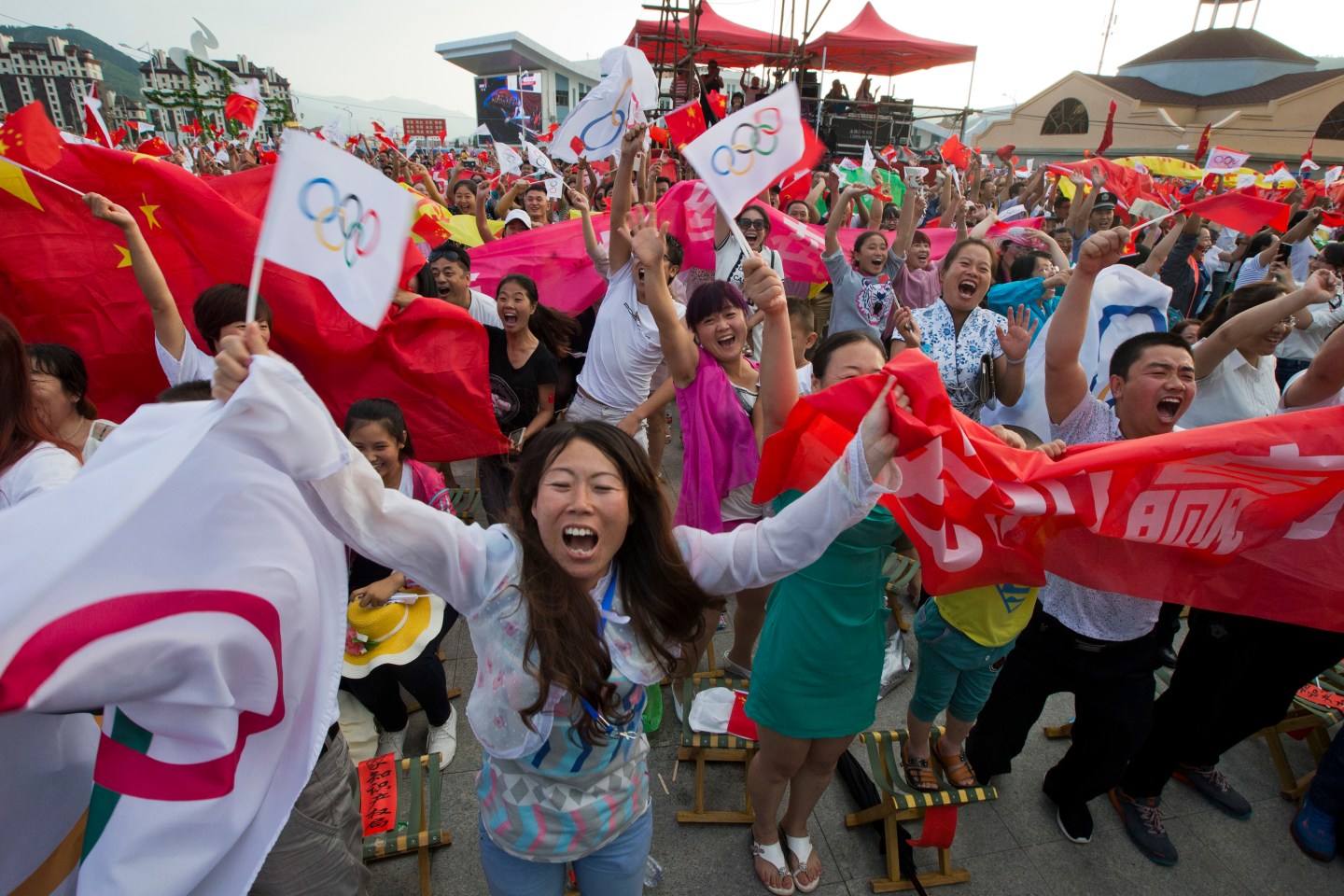 Residents celebrate as Beijing is announced as the host city for the 2022 Winter Olympics at the ski resort region of Chongli where the Nordic skiing, ski jumping, and other outdoor Olympic events will be held in northern China's Hebei province Friday, July 31, 2015. Beijing was selected Friday to host the 2022 Winter Olympics, becoming the first city awarded both the winter and summer games. (AP Photo/Ng Han Guan)
Photograph by Ng Han Guan — AP

The Chinese city of Beijing has been named host of the 2022 Winter Olympics, beating out Almaty, Kazakhstan in the process.

The decision was made at the 128th International Olympic Committee session in Kuala Lumpur, Malaysia. Beijing’s win will set Olympic history, as no other city has hosted both the Winter and Summer Olympic games. Beijing hosted the Summer Olympics in 2008.

Still, there’s plenty of uncertainty over Beijing’s ability to host wintertime athletics. Here are four questions Fortune has about the 2022 Games:

How much will it cost China?

The pride of hosting an Olympic event has lost some of its luster in recent years. Hosting the Olympics might seem like it affords international bragging rights, but in reality it’s a big economic drain. Greece’s 2004 Athens Summer Olympics left the country with $11 billion in debt, according to CNN. Beijing’s own 2008 Summer Games, meanwhile, cost $44 billion. The previous Winter Olympic Games, held in Sochi, Russia, cost about $50 billion.

Will there be any economic benefit at all?

It’s hard to say. Beijing believes hosting the 2022 Olympics will be a boon for its tourism industry. Per Beijing’s bid committee website:

Beijing’s tourism industry is developing dramatically and has become an important pillar industry for the capital’s economic development. With a development concept of “Great Tourism,” Beijing is making itself a world-class tourism city. Beijing is home to more than 200 A-class or higher-rated tourist attractions, 14 national industry-themed tourism demonstration spots and 15 agriculture-themed tourism demonstration spots, more than 200 municipality-level folklore tourism villages and nearly 10,000 municipality-level folklore tourism households, and more than 720 three-star or higher-rated hotels.

How can Beijing host Winter events?

Beijing’s not exactly a winter city — but then again, neither was Sochi. So expect fake snow. Lots and lots of fake snow. Here’s a little on how Sochi accomplished the winter miracle, per The New York Times:

Machines make snow the same way nature does, by freezing water droplets. But they do it a few feet above the ground, rather than in the much colder conditions high in the atmosphere. Snowmaking machines employ a few thermodynamic tricks to help, but at times there is a limit to what physics can do.

Temperature is key in this process. Should Beijing be too warm around the time of the Games, things may get a little dicey. Still, as CNN notes, Beijing will host the ice-based events, while competitions requiring snow will be held about 120 miles to Beijing’s northwest in Zhangjiakou.

And what about the pollution?

Beijing officials, of course, are doing their best to dissipate doubts regarding the city’s smog and pollution issues. For what it’s worth, the city did curb pollution effectively in 2008, so it’s possible it could repeat those efforts.

Xu Jicheng, who helps lead Beijing 2022’s press efforts, said in a statement that “technically the pollution has been reduced and controlled, we have seven more years to go and it will be sunshine and white clouds.”