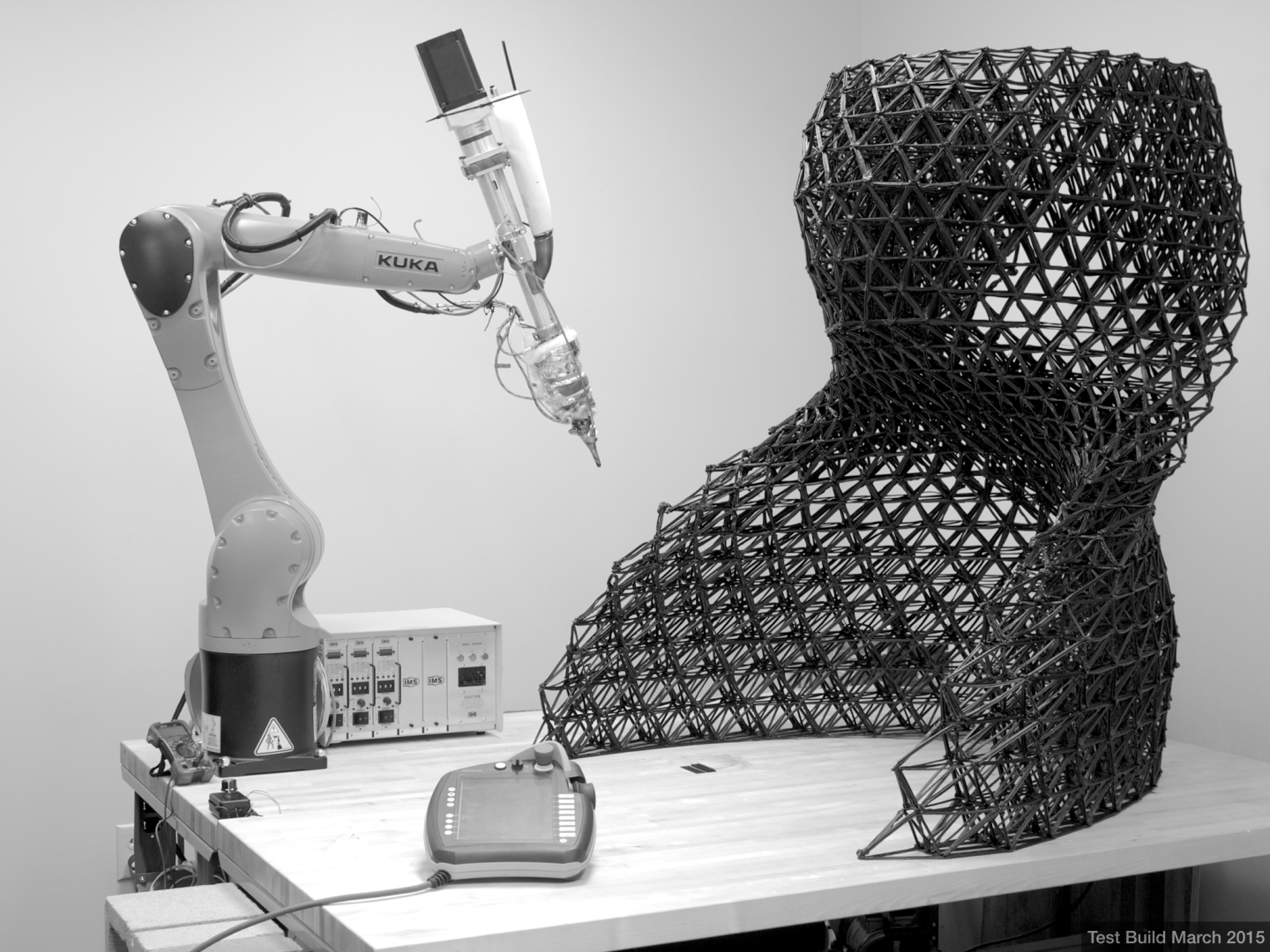 DO NOT REUSE
Courtesy of Branch Technology

For Platt Boyd, inspiration struck in the way aspiring writers envision their Great American Novels taking shape: late at night, after a drink.

In Boyd’s case, however, the drink was just a caffeinated beverage. And while he had pen in hand, that pen was the 3Doodler, an instrument for creating freeform, 3D-printed objects. Boyd drew a 3D matrix.

“Something that weighed a half an ounce supported 18 pounds of books,” he says.

At that point Boyd knew he was on to something. Roughly a year and a half later, he’s now the founder and CEO of Branch Technology, a Chattanooga-based startup that thinks it can change the future of building construction with 3D printing.

“Modern buildings are always systems that come together to form a composite assembly,” Boy says. “We’re saying: how little can we 3D print and allow these other materials to become the strength of the wall assembly?”

Branch Technology calls its building strategy cellular fabrication. As opposed to conventional 3D printing where thermoplastics are heated, then cooled, and then layered to create a structure, Branch uses a freeform 3D printer that solidifies building material—in Branch’s case, a mixture of ABS plastic and carbon fiber—in open space. The printer’s extruder head is attached to 12-and-a-half-foot robotic arm supplied by Kuka Robotics, which in turn travels on a 33-foot rail. Using this system, Boyd says Branch Technology can print a 3D matrix 25-feet wide by 58-feet long. These open matrices printed by Branch serve as an internal support structure, over top of which foam insulation, concrete, and other, conventional construction materials are layered.

“We have an algorithm that can generate geometry and robotic code to create this matrix,” he says. “That open matrix is very lightweight. We fit them together like big Lego blocks on site, [and] then you apply construction materials on site to become a wall assembly in the field. If someone sends us a file, a CAD file, then we can produce that wall.”

Boyd, an architect of 15 years, cut his teeth working for Seay, Seay & Litchfield Architects in Alabama, where he and his fellow partners mainly did architectural work for universities, the Department of Defense, and a few house contractors. He left the firm in May 2014, and two months ago he moved north to Chattanooga as part of the GIGTANK accelerator program, where he unveiled Branch Technology for the first time at GIGTANK’s Demo Day.

So far the four-man startup has raised a little more than $900,000 in seed funding, a portion of which came from Boyd’s own 401K savings. It’s now looking for another $1.5 million in funding.

According to Boyd, a 2-and-a-half-pound 3D-printed matrix with spray foam applied can support a little less than 3,000 pounds. But Branch Technology’s selling point, he says, is that using these 3D-printed matrices as the starting point for wall assemblies drops construction costs to somewhere between $80 and $140 a square foot. Compare that to the thousands of dollars it sometimes costs to build grand buildings with creative designs, and you have what Boyd believes is his startup’s most marketable factor.

“It’s thin-shell concrete construction when it’s all said and done,” he says. “On top of those materials you can add whatever interior or exterior finish you want. Outside could be stucco, or brick. It’s the real deal.”

Perhaps the place for this technology is in the Bay Area, where, as SPUR reported, “residential units [are] going for $1,000 per square foot or more in newly constructed buildings in San Francisco’s most desirable neighborhoods.”

For now, the startup is staying put in Chattanooga, where it plans to put its bold prediction regarding the future of construction—an industry worth $8.5 trillion worldwide—to the test. Branch Technology is sponsoring a $10,000 design competition to construct the first 3D-printed house using the startup’s cellular fabrication technology. The contest begins in September, and entrants must supply plans to build a house between 1,200 and 1,400 square feet. Branch Technology’s partner in the endeavor is Oak Ridge National Laboratory, which was responsible for 3D printing a Shelby Cobra at this year’s North American International Auto Show.

“What we’re focusing on right now are those interior walls and those exterior walls,” Boyd says. “Eventually, roofs. But you have to see something at scale to see it work, and know that it can withstand the forces of nature.”