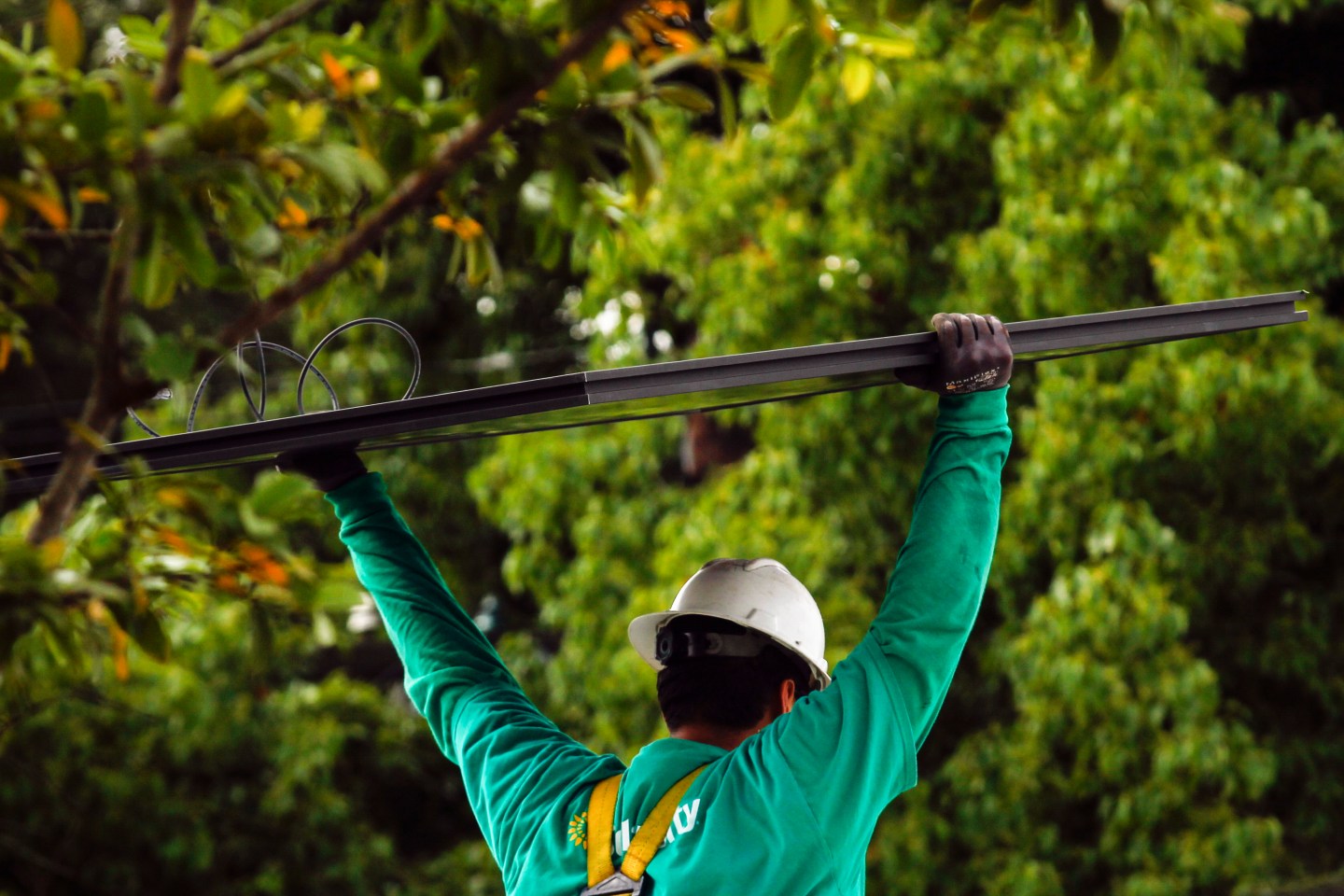 A SolarCity Corp. employee carries a solar panel on the roof of a home in the Eagle Rock neighborhood of Los Angeles, California, U.S., on Wednesday, May 7, 2014. SolarCity Corp., the largest U.S solar-power provider by market value, is expected to announce quarterly earnings figures after the close of U.S. financial markets on May 7. Photographer: Patrick T. Fallon/Bloomberg via Getty Images
Photograph by Patrick T. Fallon — Bloomberg via Getty Images

In a move to expand the market for solar panels in the U.S., solar company SolarCity on Tuesday said it plans to sell a new solar service product to small and medium-sized businesses. The company, which is the largest solar installer and financier in the U.S., made the announcement one day before it is due to announce its second quarter earnings on Wednesday.

Some might be surprised to hear the solar industry needs a new product to sell rooftop solar panels to mom-and-pop shops, or businesses with under 500 employees. But in an interview with Fortune, SolarCity chief executive officer Lyndon Rive explained: “the truth is that small and medium businesses have been neglected by the solar industry over the past five years.”

Why? The segment has fallen into the gap between the large commercial customers (like a Walmart), which generate big contracts for solar installers, and the residential solar market, which creates a steady stream of small projects that are manageable enough for in-house installer teams to handle. In addition, some solar financiers haven’t been comfortable taking on the credit risk of funding smaller commercial systems through lease contracts.

As a result, most solar installers, like SolarCity, have either outsourced these small and medium-sized business customers to other installers, which adds costs, or have just been unwilling to service the segment.

But what’s falling into that middle ground is a market that is potentially very large. There’s 28 million small and medium-sized businesses, which account for 99% of all businesses in the U.S., said Rive, who founded SolarCity with brother Peter Rive and the support of cousin Elon Musk.

SolarCity’s new solar service product will offer these small businesses solar lease deals that are similar to the contracts it currently offers to home-owners to go solar. SolarCity plans to service these customers with its team of in-house solar installers.

SolarCity was one of the pioneers of the business model that offers customers solar panels for little or no money down, through a long term contract to buy the solar energy in a monthly bill over a couple decades. Customers pay monthly energy bills that are usually lower than what they would pay to their utility. SolarCity raises funds from investors to pay for the upfront cost of the panels and buys solar panels from manufacturers.

Today, most solar panel deals are done through these types of contracts. Rive thinks SolarCity’s solar contracts for small and medium-sized businesses could open up the solar market for this new customer in the same way it has for home-owners. He says small businesses will be able to save 5% to 25% on their monthly energy bills by doing a solar lease deal with SolarCity.

Why now? SolarCity says that thanks to a change in a law in California last year, solar lease deals — like the ones SolarCity offers — can now qualify for state Property Assessed Clean Energy (or PACE) programs. PACE financing is offered by states to building owners to support the upfront investment required for energy efficiency upgrades (like new insulation) or, more recently, a solar panel system.

PACE financing can be repaid within two decades with an assessment added to a building’s tax bill. The financing stays with the building even when the owner sells the building.

Because solar projects in California now qualify for PACE financing, the cost of installing new solar panels for small and medium-sized businesses in that state has dropped, making it more attractive to SolarCity. Rive says he expects other states will follow in the footsteps of California and amend their laws, too.

SolarCity says in addition to the PACE financing, the company is also using new solar panel mounting tech from a company it acquired to lower the costs of installing solar systems for small businesses. This combo has enabled SolarCity to “crack the code” to this new market, says Rive.

Behind the company’s decision to launch this new product is also the growing consolidation and difficult market that solar installers and financiers like SolarCity face. As the industry has grown and matured, it has become increasingly competitive and big companies like NRG Energy have moved in.

Smaller companies have scrambled to go public, or find large acquirers. Those with the biggest balance sheets are spending large amounts of money on marketing and sales leads trying to access new customers. SolarCity is even trying to expand vertically to lower its costs and has been building a factory in upstate New York to manufacture next-generation solar panels.