How the Internet of things is protecting endangered rhinos 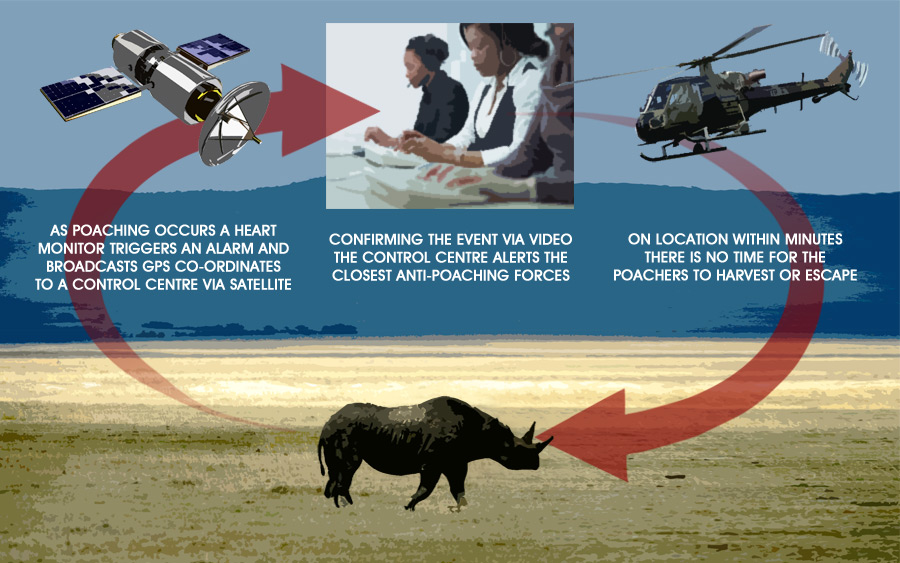 Courtesy of The Humane Society

African rhinos and other endangered creatures are getting some high-tech help in the fight against poachers. Thanks to a new project supported by the International Humane Society, called Project RAPID (Real-time Anti Poaching Intelligence Device), an organization called Protect is using satellite signals, heart rate monitors and video-streaming, the animals are now under 24-7 monitoring (hat tip Adafruit’s blog).

The constant surveillance of the animals allows the anti-poaching team to monitor hundreds of miles of terrain by getting a notification whenever the animal’s heart rate monitor spikes or signals distress. The team can then check a video camera implanted in the rhinoceros’ secondary horn to see if the animal is wounded. If the rhino is hurt, the system can send a helicopter to the GPS coordinates.

As ideas go it’s brilliantly simple in theory, but in practice the technical details could be daunting. You also have to capture a rhino and surgically implant a camera in its horn.

After the (ahem) rhinoplasty, the two biggest technical challenges are connectivity and battery life. Sending video is bandwidth intensive and not all satellites are great at offering a lot of bandwidth in real-time (unless we’re talking about the expensive, high-end satellite feeds that broadcast networks use). I’m not sure what satellite service Project RAPID is using to send its video feeds (I’ve asked), but there is likely going to be a lag between sending any of the data, confirmation and the rescuing rangers.

There are also questions about battery life. Many GPS packs made to be attached to animals have a 9-month or a year-long battery life before the animal needs to be caught, put under and refitted with a new battery. That may be the case here, although with the video camera, I’m a little confused on what the power-draw and subsequent battery change might look like.

However, as ideas go, Project RAPID is an example of an organization trying to apply the benefits of the internet of things to a big problem even though it’s likely to run into some technical and cost hurdles along the way. And who knows, what it learns about tracking animals, might also be applied to tracking shipments of goods across Africa or other remote locales as well.

Steve Piper, a director of Protect, said in a press release that the proof of concept research has been completed in South Africa and the first rhino prototypes should be in the field in a few months. The Humane Society is also beginning a similar effort for tigers and elephants. Given the kind of footage these cameras could record, maybe National Geographic or the Discovery Channel might get involved in funding these efforts.