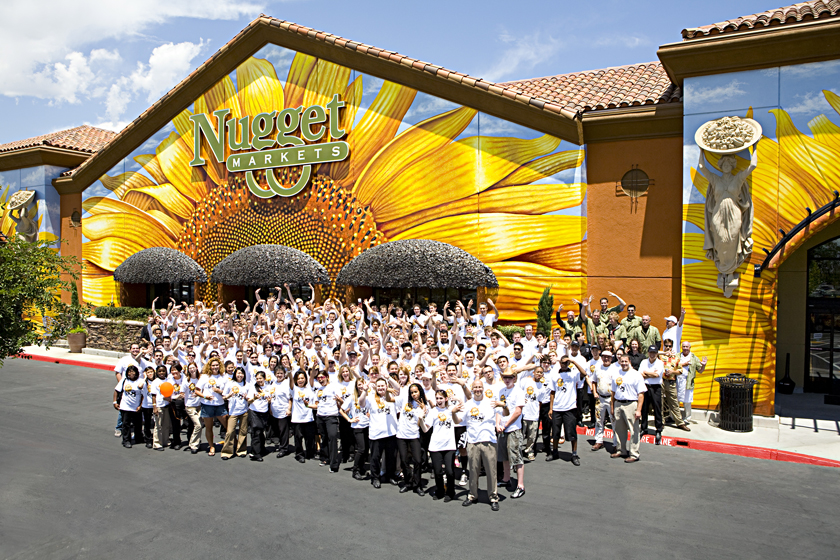 Kristen Patchett was a teacher’s aide in Northern California five years ago when she took a part-time job at Nugget Market to fill her free afternoons. Between then and now she left teaching, received three promotions, and became the manager-in-charge of the grocery chain’s West Sacramento store. When she graduated from the company’s intensive leadership program in 2013, she got emotional. “You’ve been trusted with knowing so much about the store,” she recalls thinking. Not bad for someone who had been bagging groceries three years earlier.

Extensive training for employees and bringing workers into the family fold are signatures of the West Coast grocery chain, whose brands include Nugget Markets, helping land it on Fortune’s 100 Best Companies to Work For ranking every year since 2006. The company, which got its name from a 10-year-old who won a naming competition in 1926, is currently run by the fourth generation of the Stille family (the fifth is working its way up the ranks).

Nugget Market workers received between 40 and 140 hours of training last year. Because of that investment and its legacy, company executives take HR seriously. “We hire the attitude,” CEO Eric Stille says. “We’ll teach you the grocery business.” Last year the company waded through applications from 10,400 people for 273 spots. New employees who aren’t up to par are notified and coached on what to fix. “If there isn’t an improvement, we’ll be parting ways,” Stille says.

If that seems excessive, con­sider the duties of a Nugget Market entry-level worker. Clerks not only bag groceries but also escort customers to their cars, bale cardboard, corral shopping carts, and complete hourly safety sweeps of a store’s aisles. Stille says the heightened attention to detail is what sets the company apart from the ever-increasing competition and helped it grow same-store sales 5% year over year.

In exchange for asking a lot of its employees, Nugget Market pays well. The company’s checkers—a step up from a courtesy clerk—earn an average of $17.53 per hour, compared with $10.37 for grocery cashiers nationally. Store directors earn $98,500 per year on average, with potential for up to $15,000 in bonuses and overtime. Nationally, grocery store managers earn about $82,790. And any employee who works at least 22 hours a week is eligible for health insurance. The company pays 100% of premiums.

Plus, there’s a chance for personal triumph. The most anticipated event of the year at Nugget Market is the Bag-Off, a raucous companywide tournament in which employees stuff food into grocery bags as fast as they possibly can. Jeremy Jones, who works at a store in Davis and judges the competition, concedes that the event is “off the hook crazy.” But it, too, is a development opportunity: “When we’re judging, we say, ‘This is great, but I would do it this way.’ ” Even bagging improves with training.

Headquarters: Woodland, Calif.
Revenues: $275 million
Perk: If Nugget Market associates shop where they work, they get 10% off.