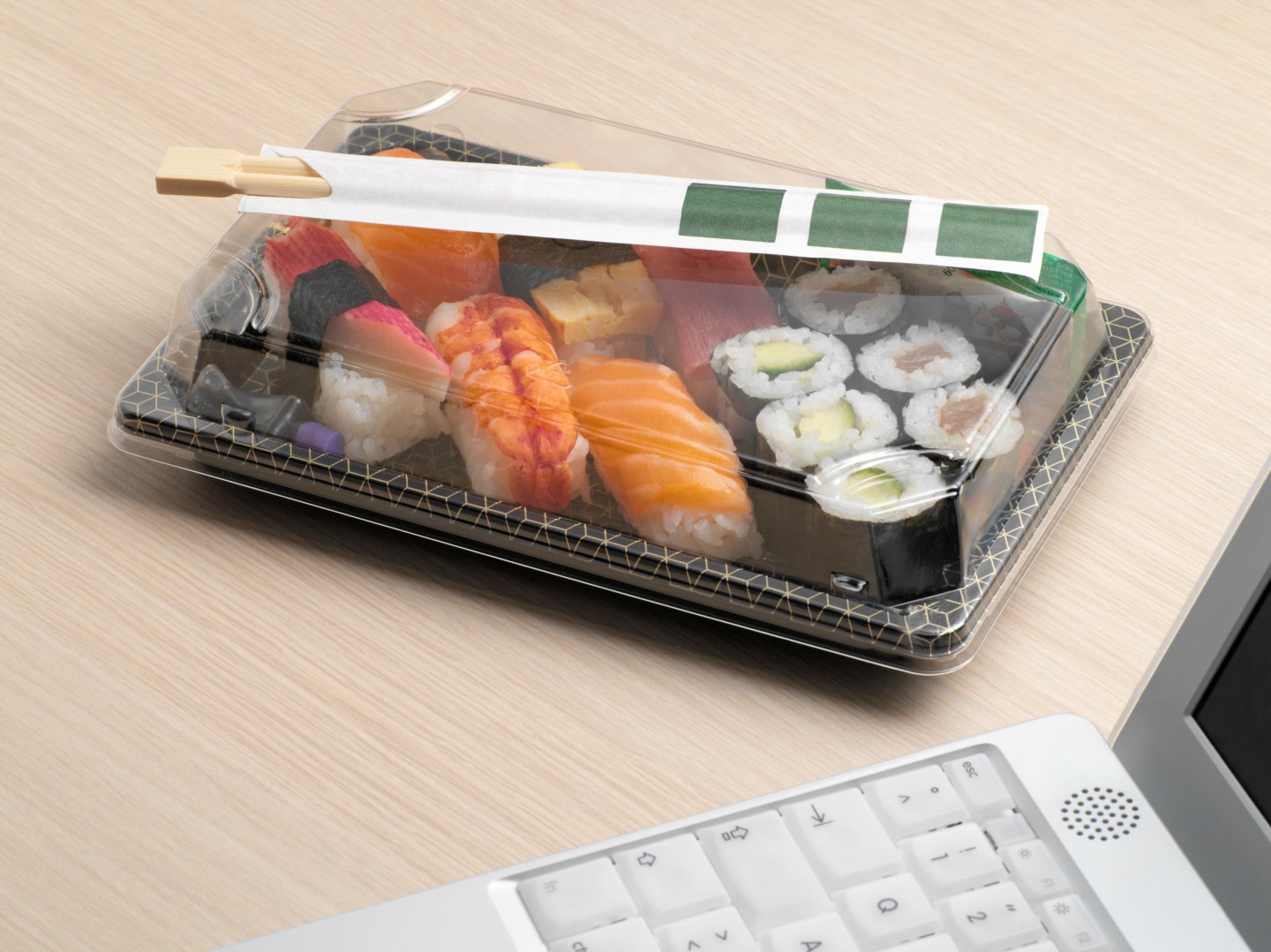 Sushi and a laptop
Photograph by Getty Images/Image Source

But this summer has seen a bad outbreak of salmonella from eating raw tuna. Which raises the question: How safe is it to eat sushi — especially when it comes from the corner drugstore?

Since 2012, Centers for Disease Control and Prevention reports that sushi made with frozen tuna has been linked to two major outbreaks of salmonella. The first, in 2012, made 425 people sick. The current one, which is ongoing, according to the Centers for Disease Control and Prevention, so far has been responsible for the illnesses of 62 people in 11 states.

Americans have come to view sushi as a healthy, low-cal alternative to meat and carbs, and consumption of sushi has increased 28 percent in just four years, from 2010 to 2014, according to Statistic Brain Research Institute. In grocery stores, sushi posted sales of $704.6 million in 2014, up 13 percent from the previous year, according to Nielsen Homescan Consumer Facts.

“Sushi has become practically an American meal at this point,” says Trevor Corson, author of The Story of Sushi: An unlikely saga of raw fish and rice. “It has gone through quite an evolution.”

Capitalizing on our desire for convenient, yet more ethnic dishes, food producers have begun distributing sushi more widely. Fuji Food Products, one of the largest providers of pre-packaged deli sushi, distributes sushi to more than 6,000 stores across the U.S. Other companies like Advanced Fresh Concepts (AFC) have franchises that train sushi chefs to work in sushi bars in drugstores, corporate cafeterias, supermarkets, and universities.

This year, in Minnesota, two salmonella cases were linked to spicy tuna rolls purchased at a grocery store and a workplace cafeteria. According to the CDC, one lot of the more sought after yellow fin tuna was traced to AFC Corporations franchises in grocery stores.

Karen Neil, MD, a medical epidemiologist with the CDC, says there is no evidence that pre-packaged sushi is higher risk than restaurant sushi. “They refrigerate it where they make it, they put it into insulated tote boxes with packs of ice, and they give it a one day shelf life,” says Pete Snyder, PhD, a food safety scientist who now consults for retail food operations. But theoretically, the more steps in a food’s processing, the more likely it will be to become contaminated. “All of our food items in the U.S. including sushi go through this very long manufacturing production process, and during that process there are opportunity for contamination of food,” says Neil. “The salmonella contamination was introduced somewhere along that chain,” she says.

Infection isn’t the only risk of sushi. Fish can contain mercury and other toxins, which doesn’t pose a big risk if you’re eating it once in a while. “But if you’re suddenly eating sushi three times a week for lunch rather than once every couple of weeks if you go to a restaurant, that could be a problem,” says Corson.

The CDC has long advised certain groups of people to avoid sushi because of its potential for harboring bacteria or parasites. Those groups include children under five, those with weakened immune systems, pregnant women and older adults, defined as older than 65. ”Any time you eat any type of raw seafood, there is a risk of infection, whether from bacteria or parasites,” says Neil.

And, environmental groups warn that Americans’ increasing love affair with sushi is hurting the fish population. “The popularity of sushi has absolutely influenced fish stocks, especially blue fin tuna,” says Ryan Bigelow, Outreach program manager for Seafood Watch, an educational arm of the Monterey Bay Aquarium. Seafood Watch recommends that people ask the chef if the fish was caught in a sustainable way, but the further a diner is removed from the source, the more difficult it is to get the answer to that question. Seafood Watch advises against eating any blue fin tuna or eel. Taking it a step further, GreenPeace wants everyone to eat less, not more fish.

As for taste, Yoya Takahashi, sushi chef at Hamasaku, LA, recently rated a sampling of “cheap sushi” from 7-Eleven, Walgreens, Trader Joes and the like. He was hard pressed to reward more than 2.5 stars to any of it. For some, the rice was too mushy or too hard, the shrimp was smelly, the wasabi was like Play Doh, and the fish was meh. TJ’s sushi got a sad “minus zero stars.”

“We’re eating all this fish and it’s not gourmet food we’re eating,” says Corson. “When the flavor is being masked by sauces and spices, is it even worth eating?”

So what should a hungry worker with a craving for wasabi and soy do? Go vegetarian, he says. “If I go to the drugstore and get a sushi role, I’d get a carrot, avocado and cucumber role,” says Corson.