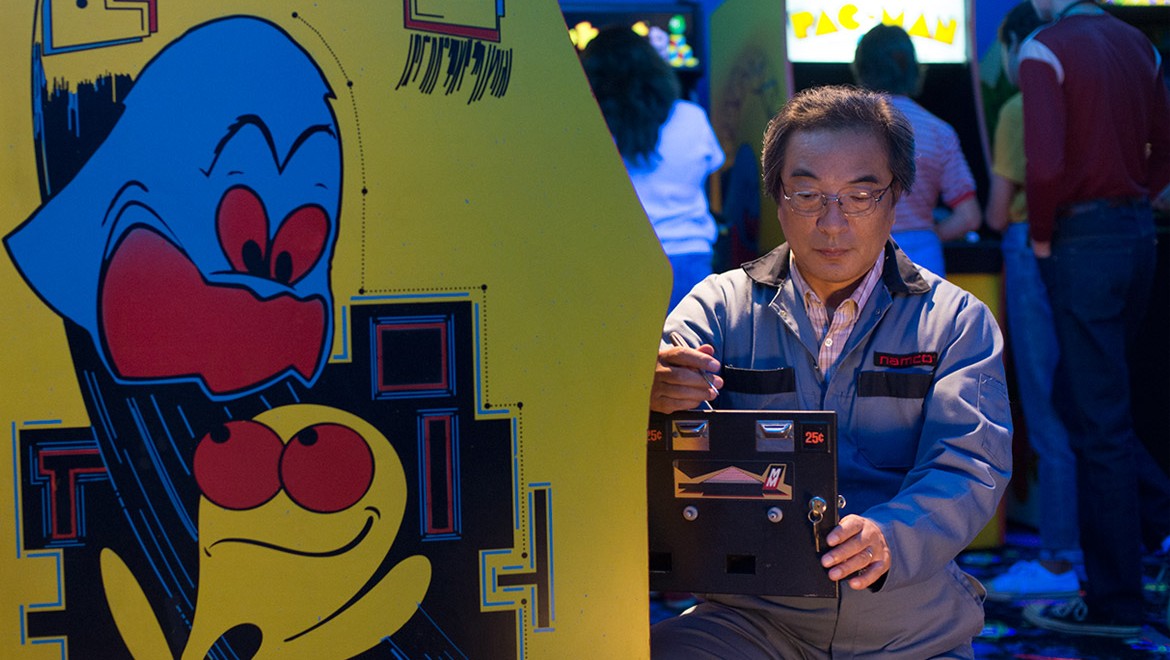 It’s hard to imagine a world without Pac-Man.

To date, the game has been released on every game system ever created. The new Sony Pictures (SNE) movie Pixels features a 30-foot-tall 3D Pac-Man invading the streets of New York City. And according to the Guinness Book of World Records, the little yellow guy is the most recognized video game character in the world.

Professor Toru Iwatani, the creator of Pac-Man, discusses with Fortune how Pac-Man has endured 35 years, and what he sees for the future of Pac-Man and the game industry.

Where did the idea for the original Pac-Man come from?

In the late ‘70s, most arcade games featured gameplay a bit more on the violent side with killing aliens and such. The result was that most arcade gamers at the time were males. I thought that arcade centers should be more luxuriant and should attract female customers and couples. With that in mind we started concepting a game that centered around the word “eat,” and we sought to develop a game that would target female and couple customers, Then one day as I took a piece of pizza at lunch, the shape of the rest of the pizza looked like a character. An image popped up in my head, and the idea of Pac-Man was born. I designed Pac-Man and the Ghosts in a simple and cute way in order to be accepted by female customers.

When did you know that you had something special with Pac-Man?

Since Pac-Man was originally intended to appeal to female customers and couples, we designed the game to deliver an “easy to play” impression with players by using cute characters and simple controls (only four directional moves). But then we started noticing that not only female customers, or couples, were enjoying the game, but also business men and male players around the world started loving the game. I then felt that this game would be a worldwide hit.

What do you think it is about Pac-Man that has allowed the game to remain so popular for 35 years?

Pac-Man has been accepted and loved so long by both the old and the young, males and females, because of its cute characters and easy gameplay mechanics that only calls for the player to move in four directions. This, combined with simple game rules, makes the game easy for everyone to play.

There is also the fun situation when roles are reversed and the Ghosts are pursued by Pac-Man. At that time, by beating a lot of Ghosts, people will feel refreshed. This game feature really appealed to human psychology, in that it’s fun to not only be chased, but to also reverse roles and chase and beat opponents once in a while.

What similarities do you see from those early arcade days and today, with people playing games across mobile, console, and PC?

We developed Pac-Man thinking foremost about the players with the spirit of delivering great experiences. We always hold the concept of “fun first” in our hearts. The reason why Pac-Man has been a worldwide hit for so long is because we considered human feelings when developing the concept for this game, he appeals to simple human emotions. And I think the concepts of “easy to play” with “balanced game design” are both commonly important aspects of game development that appeal to players of all generations.

What are your thoughts on how today game developers of all sizes can create and sell their own games—something that wasn’t possible back at the dawn of arcade gaming?

Thanks to mobile devices and the online environment, we can now enjoy games everywhere with anyone and whenever we want, and each individual can develop games as well. Just like the case where a novelist is not always an employee of a publishing company, game creators and players who don’t work for game companies can also create games as their hobbies. Tons of different and eccentric ideas can pop up, all of which could be good for the games industry because those new ideas can broaden the potential for all games.

Pac-Man is also now featured in Sony Pictures’ Pixels movie. What was it like playing an arcade repairman in that film?

Although my part in the movie is small, it’s really a privilege for me—someone who works in the games industry—to take part in the movie as the role of a repairman of classic arcade game machines. I’m really happy with that and hope that the movie will be a box office hit!

What are you working on these days?

Currently, I work at Tokyo Polytechnic University in the game design department that’s part of their art school. I’m teaching game study, game planning, and I’m working on serious games which can contribute to the society. So many games are now played on small screens such as tablets and smartphones, so one of the purposes of this university course is to research and develop an innovative new game system.

One system we’re working on is a wearable Gaming Suit, in which the display, controller, and the player are combined. By creating this wearable Gaming Suit, we hope to expand research in innovative ways to play games and depict games as art in order to broaden video gaming’s potential. You can check out our university blog.