Why Anthony Weiner joined a PR firm, in his own words 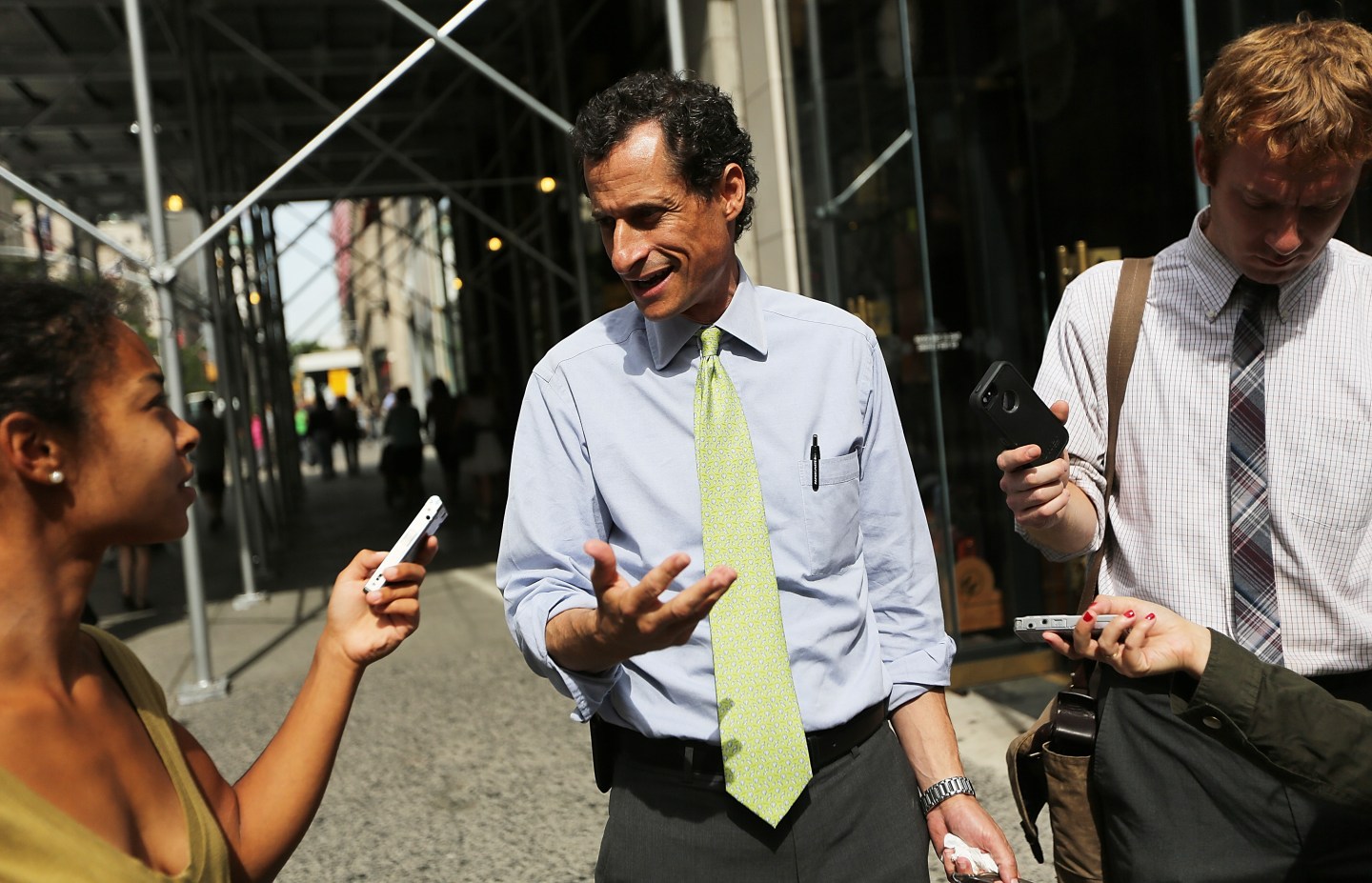 You may know Anthony Weiner as a former New York City congressman, or a former mayoral candidate, or an occasional political pundit, or as a guy who tweets a lot about hockey. Or your first association may be with a high-profile scandal involving social media and photos. But now Weiner is taking on a new role as a part-time consultant for a high-profile public relations firm, MWW.

While many call MWW a “crisis P.R. firm,” and while it identifies itself as “public relations, public affairs, and marketing,” Weiner says he won’t be doing P.R. He will be consulting on new business development and on policy, and will not work directly with MWW’s clients. He also downplays the significance of the job, pointing out that he has been doing this kind of work for years already on his own.

But this is a more significant career move than Weiner seems willing to admit. In the years since his 2013 mayoral run failed after a scandal redux, Weiner has had the freedom to settle into an image as a vocal, likable, unfiltered talking head—on social media, in newspapers, and on television—about political and local issues. Now he is going corporate, and as he acknowledged in an interview on Thursday with Fortune, his freedom will be restricted. (In fact, after making that very point, Weiner was asked about Uber and was quickly cut off by a communications handler from MWW, who asked him not to answer.)

For MWW, this represents a bold, potentially risky bet. The trade publication O’Dwyer’s, for one, applauded the hire, writing that MWW has made “a shrewd and gutsy move” and calling Weiner, “a straight-talking, no BS, street-smart guy, a personality type found lacking in most large PR firms.”

Fortune: How did this job come about?

Anthony Weiner: Well, I’ve been doing consulting and business development kind of things ever since I left Congress. So it’s not some kind of great new thing. The new thing is I will be doing the work under the umbrella of a well-known, deeply talented, deeply resourced company. And I look forward to that.

I wanted to work with people again, and there have been some clients I haven’t really been able to take on because I didn’t have the bandwidth. MWW has a lot of talented people, including people that used to work with me and for me. So that was most of the appeal.

Look, not a lot happened here. [He laughs.] And I would be careful not to re-report what the Post wrote—for example, I’m not doing P.R.

But MWW is branded as a P.R. firm. How would you describe what you’ll be doing, if it’s not P.R.?

I would say it’s business development. Everything from a tiny company that’s trying to figure out adoptions and strategy, to larger companies trying to figure out ways to deal with problems. You develop a lot of knowledge and a lot of relationships when you spend 20-something years in public life, and so I kind of understand those problem-solving and business development kinds of things.

Is there work of this nature you did for a specific client in the past that you’re proud of and can talk about?

Well, in my contract, I don’t talk and they don’t talk, and that’s fairly standard. What I did in 2013 because I was running for mayor was I went and asked people to waive that clause, and some of them spoke to the press. To be honest with you, I don’t care that much about your story to go and do that again, but I can paraphrase their views for you: I’m a smart guy with interesting experience. [He laughs.]

You’re missing the real story here: I did the New York Post Gordie Howe hat-trick this week. I was in the front of the book for a review of Sharknado 3; they editorialized about me in a separate piece; and they made me the wood! [Author’s note: “Wood” is a term for the front page art and headline of a daily tabloid.] How many people can say they did that in one week?

Well, there’s your interest in the media landscape of New York—does moving to MWW restrict you from playing in that world?

You and I have two or three people on the phone with us right now. If it were just me, I can just say or do whatever I want and not care about how it impacts anyone else. And there’s a certain liberty that goes with that. When you’re part of a larger company they have clients to consider. It’s like, I’ve never had one of those disclaimers in my Twitter bio, “retweets don’t mean endorsements”—those are for people, and you’re probably one of them, who have to be careful. So I do have to get used to that now. I haven’t had a boss in a long time.

But I’ve been a public figure in New York City for a very long time, often more public than I would like. I am who I am. And hopefully this job doesn’t change my personality that much. But there’s no doubt about it: even though it’s a part-time relationship, and even though I’m not going to be doing P.R., it means that if I were going to do Sharknado 4—and I’m not saying that I am—I’d probably knock on [MWW founder and CEO] Mike Kempner’s door and say, “Hey, are you okay with one of your employees becoming a multimedia sensation?”

And despite those new restrictions, it was still worth it to you.

You know, at a certain point, if the buffer to having a conversation with you is too deep and too intrusive, I would leave. I would rather talk to you than work through any company. But no, in all candor, part of the appeal of going to work for a company like MWW is there are a lot of very talented people there that have skill sets that I don’t have. There are people I have a much better chance of working with at MWW than I would as an individual. But to be very clear, I’m not going to have a 9-to-5, sitting-down-there kind of thing. I hope to be a resource to them.

As you say, this will be the first time in years that you’ve worked with other people, and in an office setting. To what extent might the salaciousness of the scandal from a few years ago effect working with people at MWW?

It’s a good question. It is, to some degree, a subset of everyone else in New York. At MWW, there are people who I think, just like when I walk the streets of New York, knew me as a congressman, or knew me as a candidate for mayor, or as some guy who was yelling on the floor of Congress. And they also know some embarrassing things about me, and they know why I was forced to resign. But that’s no different than anywhere else I go in New York.

Now, the difference at MWW is they see the value of working with me for the things that I know. The same way reporters call me daily and ask for help with their stories about stuff going on in New York City or stuff going on in Washington. And honestly, in the last several years since I left Congress, I’ve felt much more liberty to do that. I’ve got the Daily News thing [a recurring column], I go on NY1, and I kibbitz with reporters all the time. I didn’t feel the freedom to do that too much when I was in office, I felt much more inhibited in saying something about one of my colleagues or explaining a process. But walking in there is no different than walking in to my neighborhood dry cleaner. The only difference between me and other public figures is that people know a hell of a lot more about me than I wish they knew.

Speaking of being a source for commentary on New York news, I was going to ask your take on Uber and Mayor de Blasio.

Let me respond off the record, since I’m not sure if we have conflicts in the firm—

[Gina Cherwin, MWW chief of staff, cuts in]: WE DO. We have one there. So I’m going to ask us not to go there.

That was funny. That was an obvious example of what’s new here for you.

Well, they have contractual obligations to clients that I am not even privy to, that now I have to be aware of. So it’s a completely reasonable thing for them to say to me, “Listen, you need to be careful, because you may not know, but this guy over here is working with…” Once I’m more hip to who our clients are, we can figure out a space for me to talk about that.

It’s not a giant sacrifice—it’s not like I have to walk around on eggshells.

Right, but you’re a vocal guy who likes to give your opinions.

It’s a little bit like, John Stewart can still be funny and make fun of commercial products, and I’m sure that Arby’s still sees that as good advertising.

Michael Kempner is a big Hillary Clinton donor, and your wife [Huma Abedin] is on the campaign—does that create any conflict here?

Wait, you needed me to go to work at MWW to know that I’m on board with the campaign? [He laughs.] My relationship with the campaign, both literally and figuratively, is well documented. One of the things we’ll do is be very careful. But most traditional disclosures aren’t even needed in my case, it’s so well-known that my wife is vice chair of the campaign. Obviously I will have no role in anything involved in any way trying to influence I-don’t-know-who. But I am no more conflicted today than I was yesterday.

I am fully on-board with [Clinton’s] campaign. And one of the reasons I’m doing this only part-time is I have a lot of work around the house to do to make sure that Huma is free to do her work on the campaign.

Obviously you’ve seen the inevitable jokes people made right away on Twitter about this news—the idea of someone who suffered such a P.R. crisis going to work for a P.R. firm. But is there a way in which the scandal from a few years ago does relate, and makes you especially well-suited for this job?

Not really. This isn’t so much about the social media stuff, as much as I know that may drive a certain narrative. I mean, lots of former politicians do lots of things. Not everything can be viewed through the lens of one of my experiences. Even a famous one.