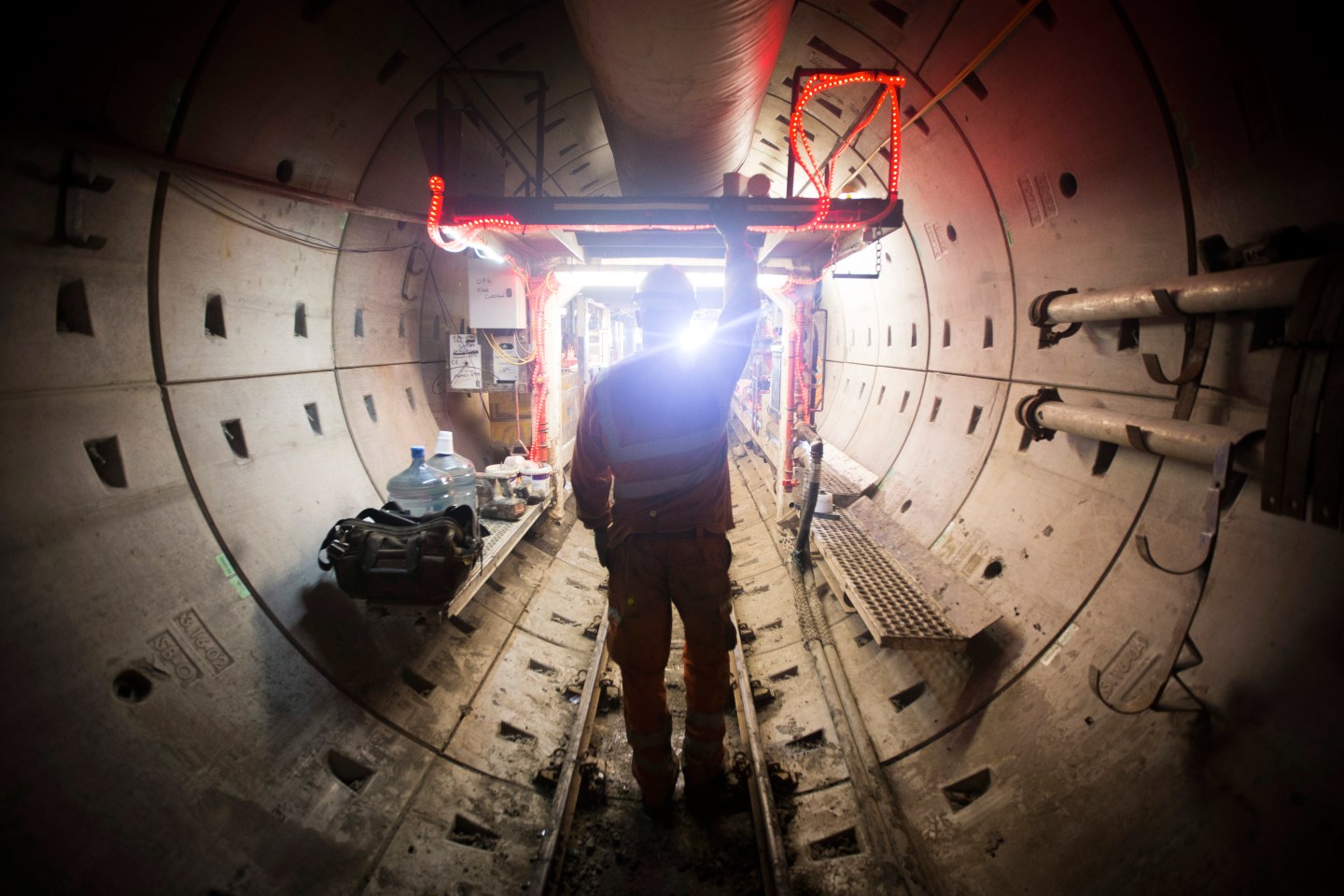 A worker stands and watches as a service train arrives at the site of a tunnel boring machine (TBM), during the construction of the National Grid Plc's London power-tunnels project, taking place underground near the Earls Court area of London, U.K., on Monday, Sept. 29, 2014. National Grid Plc's 1 billion-pound power-tunnels project in London is 5 percent under budget and ahead of schedule, National Grid Chief Executive Officer Steve Holliday said. Photographer: Jason Alden/Bloomberg via Getty Images
Photograph by Jason Alden — Bloomberg via Getty Images

Over the past decade, the Global 500 has changed considerably, and one of its biggest shifts has been a move east as Chinese companies gain momentum. This year 11 of our 23 newcomers and returnees are from Asia.

Many of the highest-ranking Chinese newcomers aren’t new companies at all. China Railway Engineering (No. 71), Shaanxi Coal and Chemical Industry (No. 416), China Everbright Group (No. 420), China Aerospace and Technology (No. 437), and China Poly Group (No. 457) are all state-owned enterprises, which means they generally don’t disclose their financials. But along with Trafigura Beheer (No. 40), a privately held Dutch global commodity trader, they all joined the Global 500 after Fortune gained access to their figures for the first time.

It’s clear that some of these companies would have been on the Global 500 for years. Trafigura Beheer has marked annual revenue of over $120 billion since 2011, and although China Railway Engineering’s subsidiary China Railway Group made our list last year at No. 86, its parent company’s debut at 71 belies its status as a previous contender. French food retailer Finatis (No. 148), had previously been left off our list while its subsidiary Foncière Euris was ranked 144 last year. Since Foncière Euris is consolidated into Finatis’s financials, its parent takes its place.

Of the companies whose financials were readily available to Fortune in previous years, Manulife Financial made the strongest showing to rank at No. 212. Though Manulife has been on the Global 500 a total of 13 years, it didn’t make 2014’s cut. But thanks to investment gains of $17 billion, the Canadian insurance firm rejoins our list.

The rest of our newcomers or returnees jockeyed out positions in the bottom 100. The tail end of our list often experiences more churn, since the difference in revenues between candidates is small. A good year can push a company into the Global 500—like United States Automobile Association, an insurance provider, which posted a 14.6% gain in revenue and secured spot No. 492. Alcoa, a long-time bottom-churner, comes in at No. 495 after no ranking last year, but with a track record of 20 appearances since the Global 500 debuted.

The other returnees include:

The other newcomers include: