In Mexico, violence chokes both local business and Coke, Pepsi 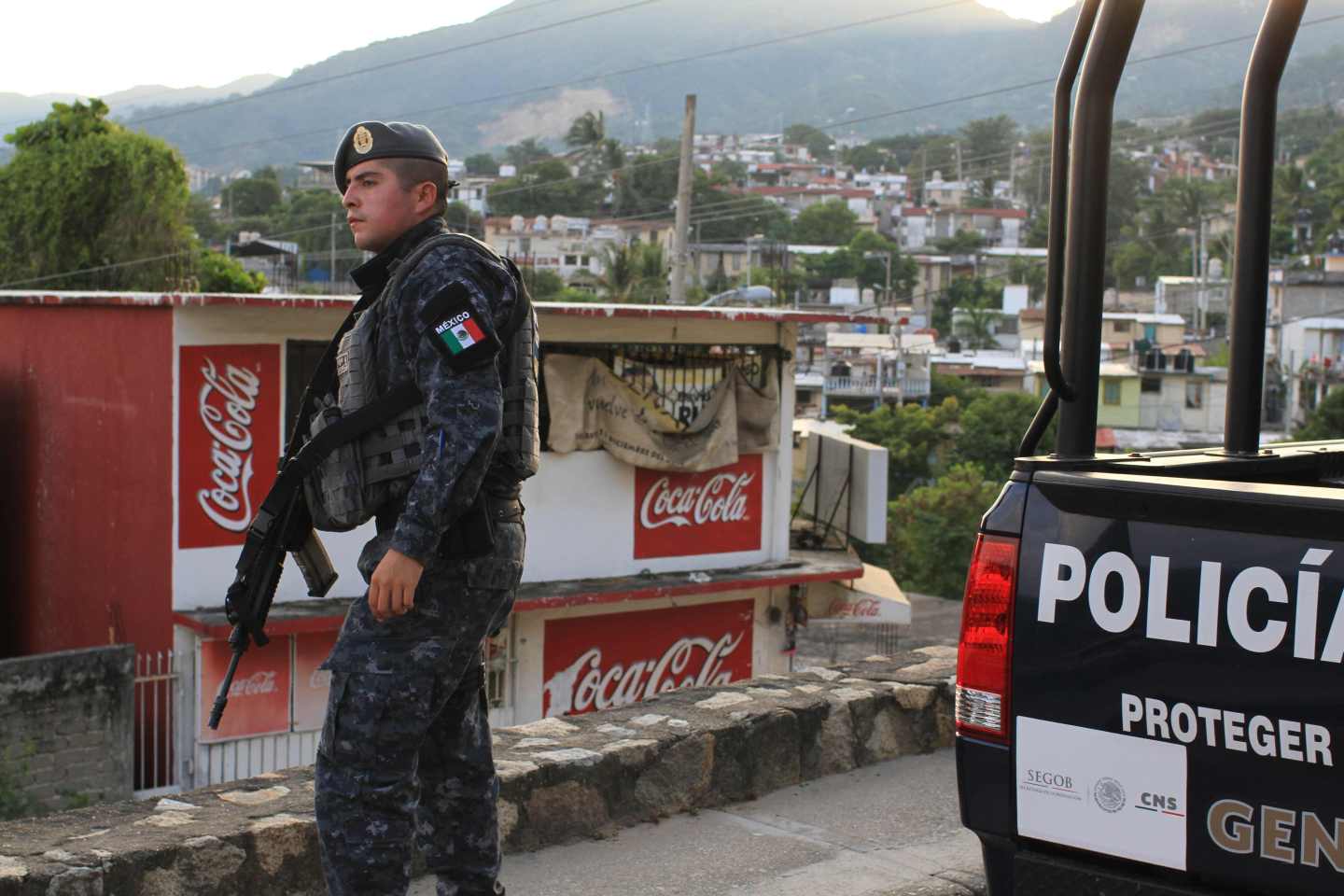 Nestled in a back table at a busy restaurant near the main plaza of Iguala, near Mexico’s southern Pacific coast, Andres, a middle-aged resident who lives on the outskirts of the city, watches the lunch crowd—businessmen in dress shirts, women in high heels and dresses.

On the street, Federal Police pickups ferrying machine-gun toting officers rumble by, and a red Coca-Cola van makes pick-ups and drop-offs at a local convenience store.

Nearly 10 months have passed since the disappearance of 43 student teachers, an incident that brought reporters from around the world to Iguala, which is located in Mexico’s southwestern state of Guerrero. Over the past few months, the town’s mayor has been arrested and voters elected a new mayor and a new governor. While the world’s attention has turned to the July 11 escape of organized crime kingpin Joaquin “El Chapo” Guzman, the residents of Guerrero have a more pressing concern: the daily death toll from gang-related shootings and turf wars between crime groups.

Andres does not feel optimistic. “What can I say? It’s worse now,” he says quietly. “Everyday there are murders, and at night you can hear the shoot-outs.”

Despite increased attention from federal security forces, Guerrero is anything but safe. Police forces are struggling to keep organized crime groups and local gangs from preying on residents and threatening the employees of major multinationals with operations in the area, including beverage behemoths Coca-Cola (KO) and Pepsi (PEP).

Guerrero is without a doubt the most troubled state in Mexico. Although Mexican billionaire Carlos Slim has invested in an ultra-modern steel and glass call center in Acapulco, the province’s struggling tourist city, Guerrero has mostly been left out of the new wave of industrialization that has occurred in other parts of Mexico over the last 20 years.

While the neighboring states of Michoacan and Jalisco have developed thriving IT, digital animation, and manufacturing sectors, Guerrero’s economy has stagnated. Eight out of 10 of the state’s residents work in the informal economy, as cash-only taxi drivers, window washers, or as itinerant salesmen. Guerrero always nears the top of the lists for poverty and homicides in Mexico. Still, with 3.4 million residents and an active tourist economy, up until recently Guerrero has remained an important consumer market for food and beverage companies.

Over the past few years, however, Guerrero’s security situation has devolved into a dystopian dynamic in which local businesses are closing and multi-national corporations have emerged as some of the most visible targets for criminal attacks. Mexican cement giant Cemex and Grupo Cuahtemoc, the Heineken-owned behemoth beer producer that bottles the Sol, Tecate, and Dos Equis brands, have both threatened to shutter their operations in Guerrero over concerns about their employees’ safety. In late June, Coca-Cola closed a storage facility in the nearby town of Arcelia, laying off 120 workers almost a year after an incident in which gunmen hijacked four delivery trucks and set them ablaze. On June 24, heavily armed commandos kidnapped a Pepsi executive on the highway that leads to Iguala.

“It’s bad. Just the other day, they killed two guys right by my house,” Andres says. “In Arcelia, it’s even worse—there are gunmen there in trucks with machine guns.”

On October 22, 2014, furious protesters drew attention to the security problems in Iguala by setting the mayor’s office in the town’s main plaza on fire, smashing the windows, and letting the flames eat away at the front wall, which was painted in the colors of the Mexican flag. Ten months later, the windows are still broken and the damaged front wall has been patched over with a coat of white paint. In the plaza, there are still several signs demanding information about the missing students and criticizing Mexico’s government for failing to provide security.

“Twenty years ago, it was peaceful in Guerrero,” explains Sergio, a thin 70-year-old high school teacher sitting under a tarp tent in front of the abandoned building. “But now, Guerrero has become a hell. It’s a corridor for drugs, for heroin. It’s like the Opium War here.”

In one particularly violent period in May, 14 people were killed in 72 hours in Iguala, including a pregnant woman. In the 10 days between June 27 and July 6 seven people were murdered, four were kidnapped, and four were injured in different criminal attacks in Iguala. On July 11, a local priest organized a mass for one of the 30 people who had been found in a mass grave outside of Iguala, after authorities delivered his remains to the family.

While organized crime groups battle over heroin fields and smuggling routes, sicarios and local thugs have started to extort residents and businesses. “Now, you don’t have to be a millionaire to be extorted. Now, people with small stores in the informal economy are being extorted,” Sergio adds.

Local business leaders estimate that 10% of the shops in Iguala and over 400 businesses in the nearby city of Chilpancingo have closed their doors because of security problems.

On the edge of the plaza in Iguala, the day’s newspapers hang on a clothesline. “The war against drugs has been lost,” says one front-page headline. “El Chapo’s escape shows the fragility of the country’s institutions,” says another. The headline of Uno-a-Uno, a local paper, says simply “Security problems are bankrupting hundreds of businesses.”

Distrust of government security institutions is a common theme in Guerrero. Maria Elisa, a 63-year-old newspaper vendor, says she wasn’t surprised about drug lord Joaquin “El Chapo” Guzman’s escape from a prison in the neighboring state of Estado de Mexico. “Money talks, and I think he just paid the guards. It was a 1,500-meter long tunnel, so how could [the guards] not hear anything?”

In Acapulco, the state’s most violent city, where 28 people were murdered in the week leading up to July 16, Pepsi and Coca-Cola trucks carry armed guards. In February 2015, Coca-Cola suspended service in the city of Chilpancingo after two of the company’s employees were kidnapped.

Coca-Cola has reported that over 250 of its trucks have been attacked or stolen in Guerrero. In February, Coca-Cola’s employees were released unharmed. The Pepsi executive, however, is still missing. (Representatives from both Coca-Cola and Pepsi declined to comment for this article.)

Inside an open-air restaurant a block away from the main plaza in Iguala, a middle-aged resident named Pedro settles into a red Coca-Cola branded plastic chair and explains that, for soda companies in Guerrero, “the risk is assault, especially up in the mountains.”

Despite the challenges, Mexico’s 122 million residents remain one of the most important markets in the world for Coca-Cola and Pepsi. Coca-Cola FEMSA, the largest Coke bottler in Latin America, sold 164 million cases of soda in Mexico in 2014.

Residents in Guerrero say that even in cases where the company trucks stop delivering Coca-Cola to particular communities, locals coordinate to make bulk purchases at nearby supermarkets.

“It’s like a vice. People need their Coca-Cola,” Pedro explains.