Apple Watch satisfaction is off the charts 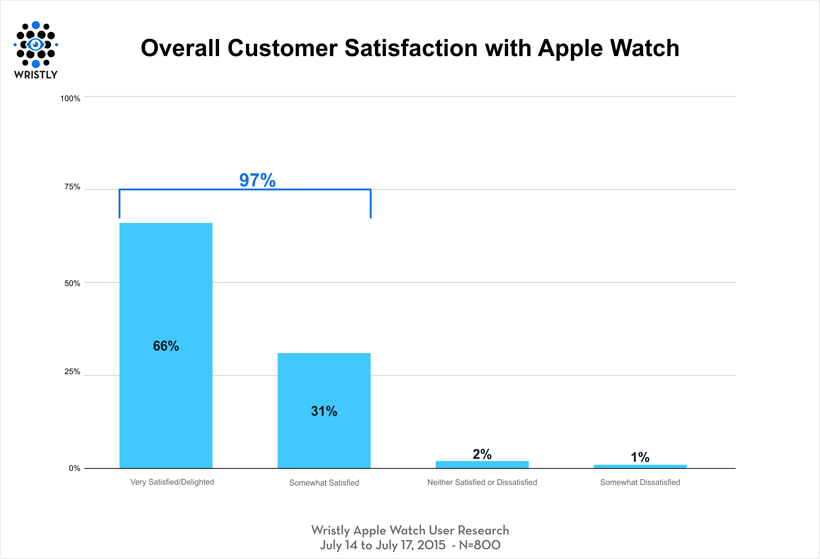 Writing on the Techpinions website, Ben Bajarin has posted the results of the first Apple Watch customer satisfaction survey I’ve seen. This sat number—taken from the Wristly Apple Watch Owners Network—is going to make a splash.

Among the 800-plus Apple Watch owners who responded to last week’s Wristly survey, 97% described themselves as either very satisfied or somewhat satisfied with the device.

This is a self-selected group, of course. made up of early adopters—albeit early adopters drawn mostly from outside the tech world. See Who Buys the Apple Watch.

Still, 97% is an extraordinarily high number. It’s better than the original iPhone’s 92% sat score as well as the first iPad’s 91%. Only the current iPhone (99%) scores higher.

What makes the score even more striking is that it flies in the face of a lot of mixed reviews and negative press coverage.

Bajarin, who has been reading through the Wristly responses and conducting interviews with respondents, thinks he knows what’s going on:

“I observed a pattern. Those whose job it was to think about the Apple Watch or who were early adopters who thought deeply about tech and the tech products they buy, were all much more critical of the watch. You could tell they evaluated it and thought about it deeply from every angle by their responses. Then I talked with teachers, firefighters, insurance agents, and those not in the tech industry and not hard-core techies. These groups of people couldn’t stop raving about the Apple Watch and how much they loved the product. It was almost as if the farther away people were from tech or the tech industry, the more they liked the Apple Watch.” (emphasis his)

As I say, the Wristly results should make a splash, especially since they come the day before Apple’s quarterly earnings report. Want to bet Tim Cook mentions them during his conference call with analysts tomorrow?